My husband, Thumbs, bought me a beautiful old dictionary for my birthday that was published in 1902 and which he found in a charity shop in Church Stretton, Shropshire. I don’t collect old books particularly, but sometimes I come across a book that’s just beautifully made, or illustrated, or printed that kind of makes my heart feel funny – and this is that type of book.

It’s covered in brown cloth, with a leather spine. The pages are a deep cream, browning at the edges and they smell amazing – like old libraries and dark bookshops. Better than that, the dictionary has been repaired, which is just so, so cool. The pastedown endpapers have been trimmed in a little, and there’s stitching in their gutter which looks out of place. When I open the book up to page 20 or so, I can see where the pages must have become loose previously. My absolute favourite repair, though, is at the back of the book. The last two pages are damaged – in fact page 845 looks like it got torn right out at some point – and they’ve been carefully sandwiched and glued between two super thin pieces of tissue paper. You can still read what’s on those pages, but through a slightly misty layer. You can even see the brushstrokes made by the repairer when gluing the pages back in, (I tried to take a decent photo of this, but my camera skills are just not up to the job). It probably sounds silly, but that someone cared enough to repair this book makes me feel a bit fluttery. I mean, when very few newly published books are even properly bound anymore, it astounds me to see such care put into the production and maintenance of a book that by its very nature will become outdated.

We’ve had tons of fun wi 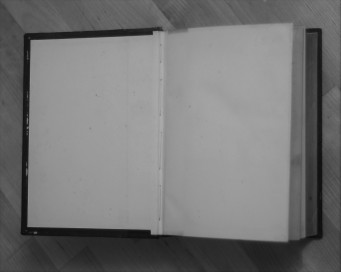 th it. We’ve spent the last few days looking up words to see how their meanings have changed, or if they’ve even made into the dictionary in 1902. Suddenly, one or other of us with shout out something, like, say, “Digital!” and the other will scoot off to find the dictionary and look it up. We then gawp and exclaim, ruminate and cogitate over what we find. (For ‘digital’ we could only find an entry under ‘digit’, where it went on to say, “Digital, pertaining to the fingers or to digits. One of the keys of instruments of the organ or piano class” – in case you wanted to know). In the early 20th Century ‘submarine’ only means under the sea; ‘car’ refers to horse drawn carriages or tramway carriages; neither ‘astronaut’ nor ‘cosmonaut’ has made it into the language yet; ‘automaton’ is in there, but ‘robot’ won’t make it until after 1920; ‘time machine’ and ‘space ship’ – nope, even though H. G. Wells’ The Time Machine was published in 1895, and the very first science fiction film Le Voyage dans la Lune by Georges Méliès came out the same year this dictionary was published; ‘atomic bomb’ – obviously not in there yet, but for ‘atomic’: “pertaining to atoms; consisting of atoms; extremely minute”.

ific, non-continuum-damaging, time machine and it’s pretty interesting to see how much the definitions of words has changed in the one hundred and fourteen years since this dictionary was published, let alone what has dropped out of use since then, or been repurposed. ‘Pylon’, for instance, was a somewhat obscure reference to Ancient Egyptian architecture in 1902, now used to refer to electrical and telegraphic cable towers. Neither of us expected it to be in the dictionary at all, (I’d love to know how it came to mean what it means now). And ‘tractor’ was defined as “that which draws; a name given to two small bars of brass or steel formerly thought to have medical efficacy when drawn over diseased parts”, OK, I get how it came to be used for a farm vehicle that hauls equipment and trailers about, but how did that whole waving metal bars over diseased parts things start? Wow.

Finally, just as I was getting this piece ready for internet-freedom, I found at the back of the dictionary a supplement section that I hadn’t noticed before. There, along with ‘kumquat’ (which we are told is delicious), ‘ultrared’ and ‘ultraviolet’, ‘eugenics’ (disturbingly) and ‘Brontosaurus’ (awesomely), was “Earth tremor – a slight shaking of part of the earth’s surface that may be noted by special instruments; cause unknown”.

Books are the most awesome thing. Ever.