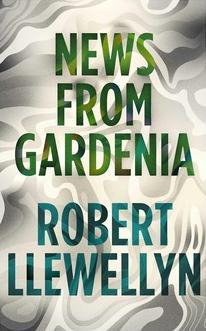 Seeing this book in the library was the first I knew that Kryten from Red Dwarf had done anything other than be Kryten from Red Dwarf and the dude in the long dirty coat on Scrapheap Challenge, (that’s how switched off I am to the world outside my head). And it’s a pretty cool book. Robert Llewellyn pays tribute to William Morris’ utopian vision of our future, News From Nowhere, instead of the usual dark and dingy future fictions where everything’s gone down the pan and we’re savages/ zombies/ cannibals/extinct. And after a little online investigation I see that the positive future tech thing is something Llewellyn is invested in, which is pretty cool too.

Anyhow, News From Gardenia revolves around Gavin Meckler, our slightly Aspergers (?), accidental time-traveller, who finds himself 200 years in the future. Instead of having a breakdown, Meckler is our guide around this vision of the future as he negotiates new relationships in a socialist society of gardeners (yeah, gardeners take over the world!). Plot-wise that’s it, but this is not a book about plot. It’s not so hot on characters either, but that’s only because this is a book about ideas. And some of the tech described makes me so excited for the future. (I lovelovelove that my phone is basically a little computer, that OneDrive and iCloud are a thing, that my brother can sit at home and play online with friends from other continents, that Microsoft have created a Translation app (my new favourite toy) only one step away from Star Trek’s Universal Translator, that the internet is such a beautiful, world-encompassing, collection of ideas and people and knowledge – I mean, if this is now, the future’s going to be amazing!) So I had quite a few moments while reading this book where I just revelled in this wonderful place where electricity is free and universally available without the need for plugs and sockets, where we can travel to other continents via pods that shoot up into space and back down again, where a kettle can be boiled in seconds, and yet the mega-metropolis has not devoured everything, at least not in the UK … instead there are vast gardens (oh, and everyone’s vegetarian – Woo! In fact, they could actually be vegans, there’s no mention of milk or cheese now I come to think of it. Double Woo!).

Llewellyn’s future society isn’t problem-free however. While he doesn’t dwell on it overmuch, his gardeners have become deeply ignorant of the technology that sustains them. At one point Meckler helps them to fix a machine that mines plastic from the ground (our waste) for reuse. The machine is technologically advanced enough that he finds the job a challenge, but for the people who rely on it it’s an old machine and one that they no longer understand. We also learn that the gardener approach hasn’t been adopted the world over. Parts of the US have walled themselves off from the rest of ‘Merica’ as it’s now known, and are separately ‘Midwest’. In Midwest they still have money and government, religion and guns, and have still got strong ideas about who should be on which side of their wall (in light of recent events this actually gave me a little chill). It is seen as a sad place filled with angry people, but it was at this point that I started to wonder about some of the things Llewellyn chooses not to address, such as: where have all the criminally-minded people got to? I mean, is it cynical of me to think that in a world like this there’s bound to be someone somewhere taking advantage of all these beatifically co-operative gardeners?

I discussed the book with a favourite customer-friend of mine (she reads anything I recommend and it’s hard not to like someone who has such faith in your opinion), and she found the human elements of the story too unbelievable (and Meckler too annoying) to enjoy it as much as I did. While Meckler is certainly a bit cardboardish (it felt like it was more important to the author to get the mechanics of the society right than worry about painting realistic, nuanced characters, which was fine by me here, but isn’t always ok), I think the utopia that Llewellyn shows us is technologically plausible and I’m pretty sure I read somewhere that all the tech described has already been realised. It is, however, hard to believe that people will be able to keep pace.  Not that Llewellyn doesn’t know this, he says himself in his introduction that “dystopia is so much easier” and you only have to check out the daily newsfeed to see why that is. But talking to Mrs M and rereading Llewellyn’s introduction to News has made me realise just how many of those grim future visions we’re bombarded with in TV, movies, games, graphic novels and books. Does the dystopian abound because we know ourselves so well? If utopian visions became the predominant stories we told about our future, would we all become more Star Trek? (In my nerdy little heart Star Trek will always be the dream and in my bright and shiny moments I believe that we can get there). It’s been awesome to read a book that gives a clue as to how we might achieve a healthy, abundant, supergreen future, but I’d like to have been able to see a little deeper into that world; Llewellyn only scratches the surface before he whisks Meckler back up into the clouds.