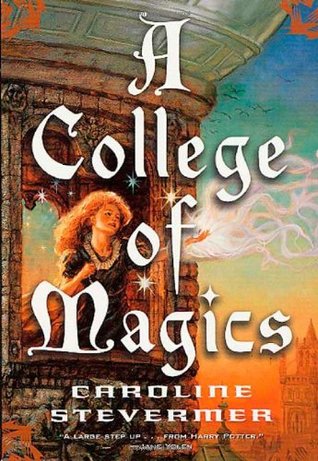 Last week I was home with the head-cold-from-hell and feeling very sorry for myself, none of my library books were looking friendly, and A College of Magics kind of winked at me from the middle of the tower of books at the bottom of our stairs. I bought it as a catch-and-release from a local charity shop when I was still panic-buying books like people do bread and milk when they think it’s going to snow. Suddenly it looked like exactly the right kind of bright and shiny that I needed, so I took it off to bed with me along with a very large mug of ginger tea and a box of tissues, and got lost in the world of Greenlaw and Galazan. I expected a kind of chipper tale of school girls learning magic and getting into high jinks. What I read instead was something far more marvellous and beautiful. Stevermer writes with a combination of humour and wit and utter loveliness. I’ve never read anything like her before, and I kind of hope I don’t find anyone else doing this, Stevermer should be the only person writing this sort of thing because she does it so wonderfully well.

On the surface A College of Magics reads light and fluffy: girl gets sent by evil uncle to school of magic where she meets her best friend; they proceed to travel around Europe having adventures and saving the world. And I would have been happy enough with that, if that’s all it’d been. But there were some beautifully written bits (often revolving around Faris’ strong connection with place) and some cracking dialogue and good meaty plotting, and the whole thing became more than a sum of its parts. I found the historical setting unusual for a fantasy, (it took me a while to work out when it was supposed to be with all the talk of stage coaches and Baedeker travel guides, but I settled on 1902-ish after a Minerva limousine was mentioned – thank you Google), and I wasn’t at all sure how magic was going to fit in (the magic’s a little slow in making its appearance, and the moment when Jane shows Faris magic for the first time I did a little one-person-Mexican-wave for the joy of it), but the magic system is one of the best things about this book. It’s magic the way Diana Wynne Jones writes magic: subtle and tricksy, with an underlying logic that reveals itself slowly. The snow in the quad, the not-a-hat, the jinxed coal, the labyrinth at Sevenfolds, the patterned rug – some of the most interesting bits of the story were all tied up with this magic like presents tied with sparkly ribbon. I loved every second of it.

The jacket blurb gives not a hint of any of the real story. It establishes only that Faris is sent away from her home in Galazan (somewhere in Europe) to Greenlaw College in Normandy by her Uncle Brinker, for vague, nefarious reasons, (it won’t fit in anywhere else, so I’ll say here that Uncle Brinker gave me the run around nearly the whole time I was reading this – is he evil? Or not evil? Maybe I was particularly dense because of germs, but I just couldn’t figure him out, such a frustrating character!). Greenlaw is a sort of finishing school but with magic. Only there are no practical magic lessons, and students are not permitted to practise magic. However, you cannot graduate from Greenlaw unless you have grasped the magic you couldn’t be taught. It’s like some sort of puzzle. When you do graduate, however, you can call yourself a witch of Greenlaw. And while Faris’ time at the college doesn’t even take up half of the book’s length, it’s nonetheless vital to the rest of the story. It is where we learn about this tricksy magic. It’s also where we meet most of the main players, the shining star among them being Jane. Jane is wonderful. Jane is going on my list of greatest characters ever. She is beautifully British, she is charming, she is intelligent, she is funny, (there are lovely on-going jokes about tea and three-volume novels that start with Jane). And it’s not that Faris isn’t a wonderful character in her own right – she’s brave, forthright, sensible and (I’m sorry, I just can’t think of another way to put it) has balls of steel – it’s just that without Jane Faris doesn’t have anyone else that shows her off to advantage. The dialogue practically crackles when the two of them get going – it’s fantastic stuff. Also, (and this only really occurred to me just now) I’ve not before read a SFF where the two lead characters were female. A male and a female yes, but two women driving the story/ saving the world? … off the top of my head I can’t think of another book that does that …

Anyhow, A College of Magics is tightly plotted and fast paced. While I’d have quite happily stayed in Greenlaw for rest of the book (and another couple after) Stevermer soon has Faris and Jane, Tyrian and Reed (bodyguard and henchman respectively), charging off to Paris and from there deeper into her Europe of Galazan and Aravis. While in Paris Faris is followed through the night-time streets by sinister unknowns before being rescued by that Minerva limo; there is an attempted bombing in her hotel, followed by an assassination attempt on the Orient Express; She meets with bandits on a coach trip through the wilds surrounding Galazan; she dances with the king of Aravis at a fancy-dress ball (of course!), finds the secret hideout of a pack of revolutionaries who attempt to hold her hostage, and is chased by the king’s guard. Her adventures come to a head in an actual lion’s den, with Faris trying to mend a hole in the world. You’d think that all the above would have been the biggest spoiler ever, but that’s not even the half of it – I haven’t mentioned the menacing Menary or the ghostly Hilarian or any of the political troubles in which Faris is tied up. And even if I had blabbed on and on about all of that too, it still wouldn’t really spoil the book. It’s the journey that matters here, and Stevermer is a master conductor.

And if that doesn’t make you want to read this book, nothing will!

4 thoughts on “A College of Magics by Caroline Stevermer”