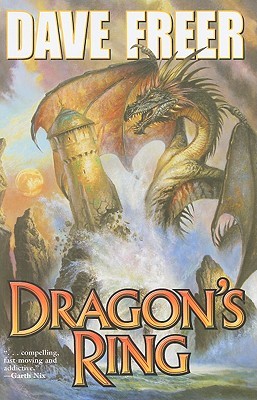 I am a fan of dragons. A big one. And I have plenty of fantasy on my TBR pile that have dragons on their covers, in their titles, and as part of their storylines. I added the ‘Dragons!’ category to my Book Bingo card because it was an easy win, but when it came down to it I figured I should at least challenge myself a little. So, instead of picking any of the dragon books I already own, I chose Dragon’s Ring, which I found while browsing in one of our smaller libraries while working there back in January (sometimes my job is just the worst!). The awesome cover art by Bob Eggleton and the early-90s vibe of the jacket design instantly appealed to my most nerdy self and while I’ve seen Dave Freer’s name around, I knew nothing about him.

I am ridiculously pleased that I picked this book up. Not only was it a rip-roaring, rollicking read, but I now have a new author to obsess over who’s written plenty more for me to go hunt down, (which is the best kind of author to find). It was also not at all the story I was expecting. It has humour and a tightly plotted, fast-paced story, but on top of that it is written beautifully. Tasmarin has become my number one fantasy holiday destination. Freer writes it completely into being and by the end of the story I couldn’t quite get my head around the fact that it’s not a real place. It is a plane on which all manner of magical creatures exist, but is unstable, as the magics that hold it together and separate it from other planes of existence degrade. And as the plot unfolded, it became very important to me that Tasmarin not be destroyed … something that Fionn, the black dragon and anti-hero of the book, intends to do. Meb on the other hand, our heroine, holds the key to saving Tasmarin, but she quickly falls in with Fionn, and hilarity and high-jinks ensue. So far, so straightforward. However, Freer is not a one-idea kinda guy, and so there are plots and counterplots among the many vying magical species who have all been tied up in a wonderfully complex arrangement that has prevented any one of them from getting the upper hand over the others. Besides humanity’s overlords the dragons, there are the rather serious centaurs, the mischievous merrows, the elegant alvar, the craftsmen dvergar, the cold, single-consciousness, many-bodied Lyr, the dangerous creatures of smokeless flame and (my favourite) the tricksy giant Groblek. There were also once human mages, but dragons systematically exterminated them all … or at least, they thought they had.

There are plenty of disguises being worn throughout Dragon’s Ring, which is another thing I enjoyed very much. As a teenager I couldn’t get enough of stories where girls had to dress up as boys to achieve their goals/hide their true identities/find out secrets, and Freer satisfies that not-at-all-dead part of me by having Meb disguise herself as a boy after raiders attack her village. She spends most of the book in this disguise, leading to plenty of the usual (and some more unusual) mistakes and confusions that can be caused by a girl in boy’s clothes. Freer’s dragons are also creatures capable of diguise. They’re shape-shifters, although most of them look down their noses at taking on other forms, a snobbery which Fionn doesn’t share. Before this I have only read one other author who writes dragons that can shift between human and dragon form – Rachel Hartman, author of Seraphina and Shadow Scale – and I loved her vision of dragons as much as I do Dave Freer’s. It opens up new relationships between dragons and humans, and both authors take full advantage of that. In Dragon’s Ring it results in a quite touching almost-romance between Fionn and Meb that had me hooked. Usually romance either makes me feel nauseous (smooching, sex-scenes, unnecessarily long and detailed descriptions of a character’s physical traits), or makes me angry (love-at-first-sight and love-triangles: I mean, really? S/he’s just not that into you, move on, stop embarrassing yourself … love is something that develops over time, there’s no way you’re that far gone after one glance across a crowded room you empty-headed nincompoop …. Ooo, sorry! OK. Deep breath …), but Freer has a very light touch and an affection grows between Meb and Fionn as they travel across Tasmarin that remains unacknowledged until quite near the end of the book. And the ending itself? Crikey, it actually had me a little choked up … no mean feat! (I cry at the drop of a hat actually, but don’t tell anyone).

All the secondary characters are as beautifully realised as Fionn and Meb and I was particularly left wanting more of ‘Brys the merrow, Breshy and Motsognir the dvergar and Groblek the giant/mountain in love with the sea. And, of course, Díleas the dog, challenger of waves, worshipper of Meb, and friend to dragons (well, one dragon, anyway). The magic of Tasmarin is equally lovely. This is a magic that doesn’t rely on incantations or complex recipes, but works through desires and the energy running through all things. Much of the humour in the story comes from Meb’s unconscious use of magic to achieve either what Fionn has instructed her to do or what she herself wants to do. She learns to read in an afternoon because no one has told her it can’t be done, and she directs her magically-aided will towards doing so. She may not be the most kickass of heroines, but Meb has a fabulous determination that you just have to love.

All in all, Dragon’s Ring ticked all my boxes. It’s a book I will definitely read again, and an unsung treasure of our library that I will now go on to pester a great many customers to read … Man, I hate my job!