The Country of Ice Cream Star by Sandra Newman 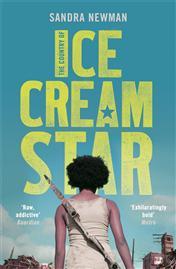 It took me nearly a month to read this. At 629 pages it’s nowhere near the longest book I’ve read, but it has been the most exhausting and emotional journey I’ve taken in a while and the crazy-beautiful language had me taking in each and every detail, and feeling each and every hurt. I know book choices are often deeply personal and just because I love this book not everyone will, but right now, while I’m still in the emotional fallout, I feel like the world will be a better place if everyone just reads this one.

Ice Cream Fifteen Star lives in a world of feral children some 80 years after the collapse of society as we know it. No one survives into adulthood because of a deadly disease called ‘posies’ that manifests itself around about a child’s eighteenth or nineteenth year. Ice Cream’s days are taken up with hunting and scavenging with her ragtag ‘Sengles’ family, and taking part in all the little dramas and petty squabbles within that family, and between the Sengles and other neighbouring groups of children like the Christings, the Nat Mass Armies and the Lowells (the names in this book are so cool!). But then Driver Eighteen Star, Ice Cream’s brother, starts showing the first signs of posies. And during a scavenging trip, a ‘Roo’ soldier is found – a grown man in his thirties – who talks about a cure. And Ice Cream’s journey begins …

So far, so typical of almost any intended-for-teens dystopian novel on the shelves at the moment. The Country of Ice Cream Star is most definitely not for teens, however, and the over-used kid-survivors-in-a-ruined-future theme is only a starting point for Newman to jump off from. Ice Cream’s story is phenomenal. It takes some wild twists and turns, both actually, and within the heart and mind of our protagonist, and while she does get a star-crossed love story in true teen fashion, it’s by far the least of her concerns as she tries to keep her family together and save her brother, her people, and her country, (because she doesn’t dream small). So while it maybe sounds a bit like something else you’ve read, I promise you this book is nothing like you’re expecting, for two very awesome reasons: Ice Cream Star herself, and the amazing language in which the book is written.

“Ever I scold my nonsense heart, it beat its same direction.”

Let’s talk about Ice Cream first, because she is rad. She could kick both Katniss’ and Tris’ behinds before breakfast; heck, she could kick Hermione’s behind too, and not even break a sweat; (please note: I don’t want her to, I’m just saying she could. If provoked). Ice Cream is possibly my perfect heroine. She is strong, bold, loyal, flawed of course, smart and funny too, has a massive capacity for love and compassion, and will not quit. She’s like the Terminator, only she sees beauty in the world around her, and reason for hope always. She never lets her fears override her. As the story moves from a local to a national scale, and Ice Cream’s mission to save her brother’s life becomes tangled up in all the complications and machinations of the various groups and factions she comes into contact with, she doesn’t lose sight of what she wants to achieve. Even when it seems that all is lost, still she does not stop. And because of this utter determination, she drags the story forward. Newman has realised this broken-down world beautifully and the detail is fantastic, but you never get to stop and admire the scenery for too long before Ice is heaving the story onwards. It is her story.

And the language perfectly reflects that. The whole book is written in a slangy patchwork English patois with French undertones that you pick up as you read. There is a logic to it, or rather a sense of the way language might break down as structured schooling is lost and the generation gaps shrink down to nothing. A sense of the way children pick up words, sometimes abbreviating them or turning a sound slightly because they can’t quite get their mouth to make the right shape yet; (we had an awesome English teacher who spoke a lot about where in our mouths different sounds are made, and the sets of sounds that belong to the different languages that have fed into English – I totally owe him for making those lessons so interesting). So, in the way that ‘drink’ can become ‘grink’ and ‘grandma’ can become ‘gram’ … in Ice Cream’s world ‘grateful’ crumbles down to ‘gratty’, ‘potato’ to ‘tato’, and most appropriately, the ‘United States’ becomes the ‘Nighted States’. This reminds me of Jack Womack’s Random Acts of Senseless Violence, in which main character Lola’s language transforms over the course of the book as near-future Manhattan society breaks down and riots and street gangs take over. The language in Random Acts is integral to the plot, Womack uses it as a visceral tool so that the reader feels the collapse into chaos. In The Country of Ice Cream Star Newman also uses language to communicate a feeling of what this new world is like, only she dunks you in headfirst. What Ice Creams’ language does is give the reader an appreciation of the creativity, wit and inventiveness of these children who have survived. It also slows the reader down to an appreciative pace, and I found myself reading and rereading sentences as often to get the meaning as to enjoy the poetry of them. That Ice Cream’s voice and language don’t waver once throughout the 600 odd pages is a heck of a thing.

I enjoyed this book so so much and nothing I say can really do it justice. Sure, it has problems (I’m not sure I can stretch my credulity so far as to accept the whole Marias episode without question), but it was impossible not to see it through to the end alongside Ice and Pasha and the Sengles. I could go on and on about the beautifully damaged Pasha, or dear Crow (could we maybe get a book just about Crow? I loved him), about the lifestyle choices made by the Nat Mass Armies versus the Lowells, about the world itself and how Newman has brought it so completely to life that I feel that if I were to visit Massachusetts I could find Ice Cream’s Massa woods and the Lowell’s mill and the Christings house without a map. But really all I have to say is this: this book be bone. Be gratty that I found it, and all my heart is rain now that it done.