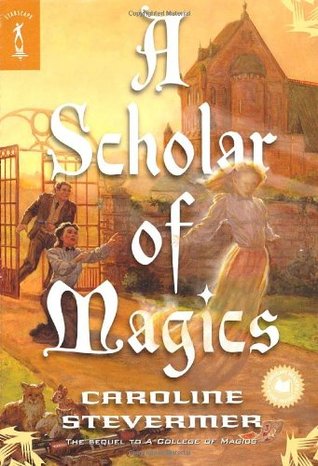 I loved A College of Magics and I was super excited when I found out there was another book set in Faris and Jane’s alternative Edwardian era. I’ll admit to being a little disappointed that it didn’t continue to tell Faris’ story, but Jane was in it so that was enough for me. I bought it. And last week when I sorely needed an antidote to the breath-taking Country of Ice Cream Star by Sandra Newman I finally decided to pick up A Scholar of Magics and read it.

It was everything I needed it to be. There was Stevermer’s fabulous magic at work again, Jane’s brilliant dialogue and healthy appetite for both food and adventure, a good sort of mystery and another cast of likeable characters. This time round Jane’s fellow lead is Samuel Lambert, an American sharpshooter who’s been working with the wizards of Glasscastle University on the mysterious Agincourt Project, which he knows very little about. Lambert isn’t really what you’d expect from an American adventurer-type: he’s humble, and perceptive, and is not a little in love with the magic of Glasscastle. He’s also a character who feels that he is on the outside looking in. None of this means he is not able to give as good as he gets when it comes to Jane, however. The banter between these two is almost as good as the Faris/Jane dynamic was in the first book, and there is a romantic undertone that, while it never gets in the way, keeps things interesting. On the whole I like Stevermer’s approach to romance. I am not, and never will be, a fan of the romantic (and love triangles are right out – ugh!), but she never lays it on too thick, and in both of these novels it’s an added extra; her plots don’t revolve around budding relationships, chance meetings, stolen glances or any of that mush.

What Stevermer is absolutely best at though, is magic, particularly the magic of places. Glasscastle University is protected by magical wards as was Greenlaw in A College of Magics, but here the wards are renewed and reinforced by the ringing of church bells and the Gregorian-style chants performed by the students. Lambert’s experience of the place, it’s tranquillity and age, is bound up with his experience of these bells and chants, overheard in the gardens to which he is often drawn. Glasscastle’s distinctive magic is wholly tied up with music, in fact. When Lambert is invited to the revered Upton’s room he likens the quality of the stillness there to the music of the chant, and there are discussions throughout the book about music, and the silences and pauses within it. Glasscastle magic is the magic of people uniting – voices harmonising, bell-ringers working in time with one another – and it’s easy to feel as envious as Lambert does for being outside of it all. It is also interesting that this male magic is in direct contrast to the magic of the witches of Greenlaw. Where the men focus upon the strength of pulling together to work towards one goal, Greenlaw’s magic is in Jane’s words “a highly individual matter” and is all about not losing one’s peculiarities and autonomy. I like this a lot.

I also like that magic is not fully understood in this world. It is studied by the women and men of Greenlaw and Glasscastle, but it is never mastered. It can manifest itself as wild talent, it appears in very different guises in witches and in wizards, it can be domestic, sneered at a little, but powerful nonetheless. Magic can happen, but is not always acknowledged. Magic can be cantrips and strange devices, it can be cheap tricks, but it can also be a sixth sense, a vibe or an atmosphere. It is various, and hinted at, and underlies all things.

There’s plenty of adventure here too. Jane (ah, Jane, I do love you), ‘borrows’ her brother’s Minotaur to drive wildly around the local countryside at every opportunity, there are suspicious men in bowler hats trespassing on University grounds, a couple of kidnappings, Lambert’s trials in an enchanted labyrinthine wood, a magical device that falls into the wrong hands and a threat to the very foundations of Glasscastle. Fortunately, however, thanks to Jane, there’s plenty of food to go round, (and tea, tea in abundance). And there’s excellent company too. Jane’s brother Robert, and her sister-in-law Amy, Lambert’s friend Nicholas Fell, the stuffy Porteous, and the dynamic duo Herrick and Williams (a.k.a. string bean and potato), and of course Jane and Lambert themselves, bring warmth and humour to the story.

“Don’t come any closer,” he called. “I’m armed and I haven’t had any breakfast. So don’t cross me.”

So, if you’re looking for something light and gentle and beautiful to cheer you up, or maybe it’s raining outside and you want to read something warm and cosy; if you’ve read one too many dystopian novels and need to believe again that people can be good and funny, or you’ve just watched a scary movie and can’t settle, you could do a lot worse than read A Scholar of Magics. Unless you own A College of Magics, in which case, read that.

One thought on “A Scholar of Magics by Caroline Stevermer”