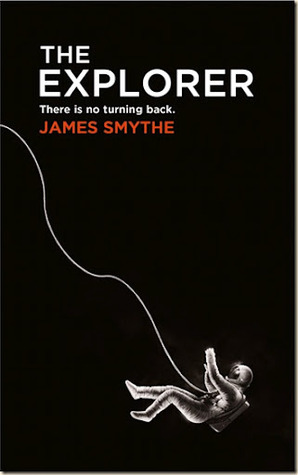 Well this was a big ball of grim and chilly darkness.

Not being a huge fan of the scary, I dedicated a day to reading, and got The Explorer done in one sitting (to achieve my ‘scary sci-fi’ Book Bingo category … naturally). I’m glad I did. Outside it was sunny and children were playing. Inside people were dying, some of them quite horribly. If it had taken me any longer to read this book I might have forgotten about things like hope, and smiling, and cake, and all that good stuff. Which is to say that James Smythe does his job well with The Explorer. It’s not outright scary, but it is tense, and puzzling, and interesting. I’m not sure I enjoyed it exactly, but I needed to know what happened next right the way to the end.

I have three small (ish) grievances with this book, so let’s get them out of the way first. One, the science bits were the least believable parts of the book. I’m not a scientist, I don’t know much about the science of space travel, but I do have a pretty good nonsense-detector, and it went off a couple of times while I was reading The Explorer. Just because you’ve got a new favourite word/concept (piezoelectric for Smythe) does not mean you should use it every chance you get unless it is illuminating or relevant to your story. Two, I found it difficult to care about any of the characters. The reader’s closest ‘relationship’ is with Cormac, as he’s narrating, but the rest of the crew never quite popped out into 3-D for me (and I had trouble with Cormac too). Three, and this is the biggy, not all women fall apart or start crying when the shit hits the fan, and yet the three main representatives of my sex in this book were weepers (… and not only that, but I don’t want to give anything more away).

OK, moving on to more interesting things. The story launches (see what I did there? It’s about the crew of a spaceship … spaceships launch … seriously, I crack myself up) with a very quick, almost comedic run through of each crew member’s death. By page 14 everyone but Cormac is dead. By page 63, he’s a goner too. I started to wonder if this was going to be some kind of Robinson Crusoe story, and whether I’d be able to put up with Cormac for the remaining 300 odd pages. All I can say without spoiling the rest of the book completely is that things get interesting right after page 63. Part Two moves about in time as it shows both the hopeful beginnings of the mission, and the inevitable strains on the crew’s relationships farther down the line. We find out what sort of people Arlen, Quinn, Guy, Wanda and Emmy were and how they became the Ishiguro’s crew. And we discover more about the events surrounding their deaths. This may all sound very straightforward, but because of a rather large happening that I can in no way reveal, it’s the best bit of the book.

Part Three slows the pace right back down and this is where Cormac started to grate on my nerves a bit. Where Part One was a detached, level-headed recounting of events, Part Three is the same events seen through a different lens. We see a much less composed Cormac dealing with his impending demise. It’s a pretty clever plot structure, and I appreciated how it was done, even if I got annoyed with Cormac’s grief-sorrow-guilt-remorse merry-go-round. (Thumbs has just pointed out that my real problem with this book was the lack of hope, and he’s absolutely right. I want my fiction to celebrate the overcoming of odds, and the coming together of people for a common cause, or a character’s belief in themselves and determination to achieve something. All my favourite books have hope and The Explorer has very little. Good call, Thumbs).

The book talks about exploration and death and time, and it talks a lot about points of view. Cormac is the journalist along for the ride on this mission and he’s there to chronicle this momentous journey both in words and images. He films his ship-mates, conducts interviews with them, writes blog posts and sends it all back to Earth knowing that their voyage is of global interest. He thinks about their mission as if it were a movie, thinks about where the long-shots and close-ups would be, and which actors would play him and his fellow explorers. When we start working through events the second time round, there are big changes in perspective that show things in a different light, and at one point the fourth wall gets rather wobbly, although it never quite comes down. This focus on POV was far and away the best thing about the book for me, and I enjoyed two of the three big reveals mostly because of how they fed back into this preoccupation with POV. (I know, I know, could I be any vaguer?!)

So, let’s wrap this up. Don’t read this book if you get irritated by shaky space-travel science, or if you get annoyed (like I do) by female characters being presented as less able to handle pressure than their male counterparts, (sorry Mr Smythe, points off for that). Do read it if you enjoyed any of the following films: Solaris (either version), Moon, ­The Martian, or Interstellar (my quick-fire reviews: Solaris – long. Moon – Rockwell rocks! The Martian – the book was better. And Interstellar – no no no Christopher Nolan. Just No). Or if you like that kind of story that shows you things one way, then looks at them from another (more revealing) angle, like Sixth Sense only … not. Or if you want a book that’ll keep you occupied for not much more than an afternoon.

It’s not a bad book. It’s (thankfully!) not full-on scary, but it’s pretty tense and interesting (OMG! I really can’t think of another word, can I?). OK. One more time … It’s a good book. It’s absorbing and nail-biting and will keep you chilled on a warm summer’s day. Give it a go …

… If you’ve nothing else to read.

One thought on “The Explorer by James Smythe”