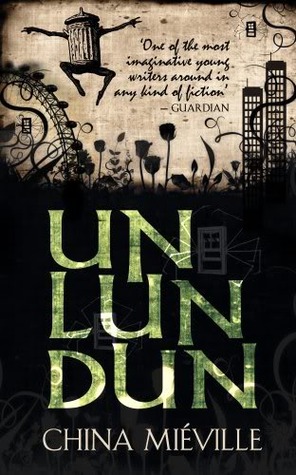 China Miéville won the Locus Award for Best Young Adult Book with his novel Un Lun Dun in 2008 (frankly it’s not a surprise when he wins any award, it’s only a surprise that he doesn’t win all of them). Looking at our purchase label in the library copy of the book that I’ve been reading we bought it hot off the press in 2007, which means I’ve been meaning to read Un Lun Dun for ten years. I honestly don’t know whether to be pleased that I finally got round to it, or annoyed with myself for taking so long. I suppose I should just be impressed that the book was still available for me to borrow when I was ready, and hadn’t been lost or nicked or damaged in the meantime.

Anyhow, Un Lun Dun is Miéville’s version of an Alice in Wonderland or Neverwhere-ish type story and as I am coming to expect from him the whole book just oozes and squirms with ideas and mad-scientist creations. What appears at first glance to be a standard Chosen-One-saves-the-world-as-has-been-foretold plot gets neatly flipped on its head, which I found deeply satisfying; there are some awesome character names to conjure with, like Obaday Fing, Inessa Badladder, Benjamin Unstible, Mr Brokkenbroll and – my personal favourite – Margarita Staples, Extreme Librarian and Bookaneer (heck yes!); Miéville also includes plenty of Lewis Caroll-esque word play, and further trope subversion, and a pretty serious environmental message to boot. And while at five hundred and twenty-one pages long you’d think it’d be a slog to read, it’s pretty zippy too.

Deeba Resham is perhaps the best reason to read this book, however. She’s not tall, not blonde, and not the ‘Schwazzy’ (the Chosen One), but she is the unlooked for heroine of Un Lun Dun. When her best friend Zanna (who is the Schwazzy) gets knocked out in her first confrontation with the Big Bad and goes home, throwing all the Propheseers who’ve been waiting for her arrival into confusion, it’s Deeba who returns to UnLondon to try and sort things out. And while no-one really has much faith in her ability to achieve anything – “you’re not the Schwazzy. You don’t have any destiny here” – she gets on and does what needs doing with a beautifully no-nonsense attitude, outspokenness and bucket-loads of good humour. Deeba cares, about UnLondon and about her friends, and because she does she overthrows everyone’s expectations.

Growing up I was always just a little suspicious of those books where prophecies foretold the coming of someone or other to save the day. I could never quite get my cynical little head round the concept – I mean, who wrote the prophecy? What did they have to gain from writing it? And who says there aren’t a whole bunch of people who could meet the Chosen One criteria? Who’s to say you’ve picked the right person? I also had a BIG problem with heroines always being exceptional. Exceptionally beautiful. Exceptionally smart. Exceptionally shy and retiring. Exceptionally exceptional. Snooze. As a completely unexceptional person I really wanted to hear more about people like me, instead of all these paragons of virtue. And reading Un Lun Dun I wonder if Miéville ever felt the same way. Because, no, Deeba isn’t your typical heroine, but while in the Propheseers’ book she is relegated to “Schwazzy, sidekicks of the. … Funny one” she proves to be clever enough, practical enough and determined enough to save the day. Which is pretty darn awesome.

‘No one is!’ Deeba shouted. ‘That’s no way to talk about anyone! To say they’re just hangers-on to someone more important.'”

Deeba’s chutzpah is all the more impressive when we learn about her adversary, Smog. Bodiless, pervasive and ever-growing, Smog is sentient pollution banished from London by the ‘Klinneract’, or Clean Air Act of 1956, now grown again to megalomaniac proportions and planning to burn the world. I had to go and look up the Great Smog of 1952 (that lasted five days and is believed now to have killed around 12,000 people), as it wasn’t something I’d ever learned about despite it being one of the big reasons for the rethink on pollution (thank you Wikipedia). It’s scary enough that this was a real thing, that some people tried to brush it under the carpet, and that we, the human race, are still capable of ignoring all the physical proofs of the damage we are doing to our planet. It’s scary in Un Lun Dun because Smog learns and grows from everything it burns and inhales:

“‘I want to breathe. To suck in smoke and know. The lovely burning of books, and houses, and pictures, and people. Silly UnLondoners. Silly Deeba. It’s not like ending. Everything burns and floats in smoke into me. I keep it safe. Make it me. I am everything.'”

It’s scary because in the way of all Big Bads everywhere, nothing matters but the increasing of its power and the destruction of everything that it isn’t. A handful of misfit types led by a snarky schoolgirl with a pet milk carton against an incorporeal cloud of evil? No chance … And yet Deeba manages it.

If I have one reservation about Un Lun Dun it’s that having read a couple of Miéville’s adult books it feels a bit odd reading something where he is clearly holding back from his usual full-on weirdness. Not that this book is not weird. It’s just that while Un Lun Dun is inventive, clever, fun and unusual, it feels very … linear … in comparison with his other stuff. Like there’s less exploring going on here. It’s still as complex and wonderfully realised a city as only Miéville can create, (his UnLondon could quite easily be a suburb of Bas Lag), but we the readers don’t get to look into all the nooks and crannies in quite the same way that we’d usually do. I like to think though, that there’ll be younger readers out there who will pick up Un Lun Dun and enjoy it so much that they’ll search out more of Miéville’s stuff, because they are going to be blown away. And just think what kind of adults young people who read Miéville will become. Even if Un Lun Dun is the only one of his books that they read, somewhere in their minds there will always be the seeds he’s sown, ideas like: no one is any more or less important than anyone else; and “destiny is bunk” – we’re all responsible for our own lives, the directions we take, journeys we make and lessons we learn. And that’s pretty darn awesome.