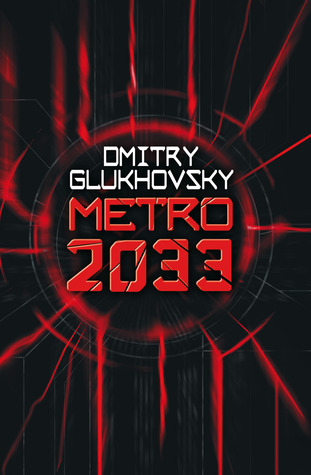 Well this was the bleakest book I could have chosen to finish off this year’s reading. Earlier in the year I had chosen The Three-Body Problem by Cixin Liu for this Book Bingo category, but I found it really difficult to get into. It also kept getting requested by other library borrowers while I was trying to read it, so I’d read a bit, return it so someone else could have it, then request it and read a bit more before returning it again, which all made for a fairly broken narrative. I gave up on it when I heard about Metro 2033, thinking this might be easier for me to grasp. Now I kind of wish I’d kept trying a bit longer with Mr Liu, because Mr Glukhovsky is just such a downer.

The world above ground is a radioactive wasteland. Humanity cannot live there anymore, but there are still survivors down in the Moscow Metro, possibly the very last of humankind, eking out a living growing mushrooms, rearing pigs and scavenging. The various metro stations are like mini kingdoms, each governed in a different way, with different beliefs, politics and economic strategies. The only thing really agreed upon across the whole network of stations is that bullets are the new currency. Glukhovsky does an excellent job of portraying this claustrophobic and oppressive environment lit only by red emergency lighting, dim torches and campfires. It’s a world dominated by the darkness, by shadows and stories – word-of-mouth being the only way information can be passed from station to station – and H G Wells’ Morlocks are very appropriately mentioned at the beginning of the book to describe the humans that now people the darkness.

Artyom is a young man who barely remembers life above ground, or his mother, who was killed by rats (!!) while he was saved by the man he now calls Uncle Sasha. He lives with his ‘uncle’ at VDNKh, the northernmost station still inhabited, and, in a rather deliberate Fantasy novel fashion, we soon learn that he is Special, he has a Destiny. He appears to be more psychically sensitive than most people, (and normally this would be where I’d have put the book down and moved on to something else, because really? … But I carried nobly on in the name of Book Bingo), and there are ‘dark ones’ attacking from the surface and some sort of dark psychic force in some of the tunnels that can send people cuckoo … yada-yada-yada. Anyway, looooong story short, Artyom is given a quest and travels to the fabled Polis at the heart of the Metro. Along the way he meets lots of very odd people: traders and old intellectuals, a man who claims to be the last reincarnation of Ghengis Khan (my personal favourite), fascists and anti-fascists, Christians and the cannibal worshippers of the Great Worm… you name it. And at the end of his journey he sort of achieves what he set out to do, (I can’t say any more about the ending without giving something away).

I suppose I found this an odd kind of read altogether. Glukhovsky writes well, (although I think the translation is a bit off in places and there seem to be multiple names for each station, which made it very hard to trace Artyom’s journey on the Metro map provided on the inside cover), and even though there’s really not much to the plot I felt compelled to read on because I never knew who Artyom was going to meet next, and each character had something to add to the picture that emerged of the state of humanity. The author portrays the remnants of the human race squabbling over pointless ideals, turning on the weak, confused and afraid and seeing no way through, clinging onto beliefs and stories. Civilisation is truly lost. Humankind is back down at the bottom of Maslow’s hierarchy of needs, working for food, water and warmth, there’s no room for anything more. The meaninglessness of existence is discussed. It’s all brilliantly, overwhelmingly hopeless. Even Artyom’s mission feels empty. He faces obstacles and near-death as he struggles to get to Polis, and I wondered the whole time what anyone could possibly do to improve things when it wasn’t even clear what Artyom’s mission was.

But I was most disappointed after finishing the book. I went online to see if I could find some pictures of the Moscow Metro – not realising then that it is something of a tourist attraction, one of the things to see if your ever go to Moscow – and, wow. It’s gorgeous. Its stations are ornate and massive and just so grand. I had no idea. While I was reading I was imagining the London Underground, which is not even remotely like it. And I was disappointed because Glukhovsky set his book in this amazing network of beautiful stations, albeit dilapidated and overrun with people and rats and things that go bump in the night, but never gave me any sense of their grandeur, never gave me enough detail to picture them. The same setting as written by, hmmm … China Miéville say, would have been such a different thing. The Metro would have become a character in its own right, which I feel it should have been, as a counterpart to the degeneration of the people now finding shelter there. Knowing that this book was inspiration for a game of the same name I took a look at some of the game images to see if the designers had used any of the Moscow Metro in their creation, but nope. No such luck.

For all my grumbling this isn’t a bad book. It does its dark-hearted sowing of hopelessness and despair very well, and the ending is a doozy. It has the feel of an epic fantasy novel – chosen one, destiny, journey, journey’s end, big reveal – just with none of the admirable fantasy character traits, and no decent secondary characters. And no women. Without getting my Feminist rage on, there’s only one woman permitted to speak in the entire book, she says nothing of consequence and she’s not even given a name. Other than her, there are no women at all in this book. Then again, perhaps that’s why it’s all gone to s**t.

Now I’m off to read something soft and fluffy so that I can remember why it’s good to be alive. Happy New Year everyone – I hope 2018 will bring you all good health and good fortunes, and great reading material. x