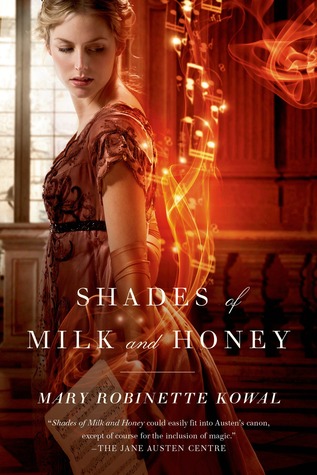 There are a lot of books out there that attempt to use Austen’s style and period for their starting point. I’ve read a fair selection in which Austen’s most beloved characters play at being detectives, and I am always just a little disappointed because they don’t quite stay true, they don’t quite sound like themselves. I have now pretty much decided to avoid anything that claims to be the continued adventures of the Darcys, the Wentworths or the Knightleys, (or any of their children) in self-defence, but I still find the Regency period, and Austen-esque stories set on the small stage of drawing rooms and ballrooms, and in which decorum and reputation are everything, endlessly fascinating. So imagine my delight when I found this little gem while tidying the shelves at one of our neighbourhood libraries last weekend.

And it really is a gem of a book. It is a small scale story about accomplished, plain Jane and her prettier younger sister Melody, about the search for a husband and the dangers of inappropriate behaviour, and all the usual Regency concerns of wealth and breeding. But it’s also about magic. Not earth-moving, power-struggle magic, but domestic magic, magic as an art. Magic in portrait, not landscape.

Obviously we’re on Jane’s side. She’s the more interesting character of the two Ellsworth sisters not because she’s plain and has therefore had to work on her personality, but because she is both accomplished in ‘glamour’ and hungry to learn more. She has an ambition and interest in her art. She looks to see how something is done and then tries to replicate it, which gives the reader a sense of how glamour works, it’s capabilities and limitations, and how it is a part of this world. Jane is also sensible. Not death-knell sensible, she’s still got a sense of humour and makes mistakes and all that good stuff, but she doesn’t say “La!” every time she opens her mouth, she doesn’t faint at the drop of a hat, and I never felt like slapping her for being selfish or mean (sorrynotsorry Melody). When a friend of hers is feeling down in the dumps she does practical, helpful things to get her back on track. She doesn’t try to hide or dress up her faults in fashions that don’t suit her. She talks about things that interest her and doesn’t make silly, idle conversation.

The star of the show though, is glamour itself. Kowal writes about it brilliantly. The mechanics of it, its effects, the cost of working with it, all feel very solid. That it is an accomplishment in a woman’s repertoire like music and embroidery doesn’t diminish it, because while we see first how it is used to make a room more charming and to add depth to a watercolour, we also see it used in a variety of ways that suggest at where Kowal might take it in the books to follow. I am hopeful that what we see in Shades of Milk and Honey is the tip of the magic iceberg. Even if it’s not, I love the language used when Jane works glamour: drawn from the ether, glamour is folded, twisted and woven, stitched, threaded and tied off, which is all very suggestive of working with fabric, only this is a fabric that can be drawn thin as gossamer or into thick, heavy ropes, manipulated into spheres around a person, or tied in such a way that one thing that can be seen, with a quick pull, can be transformed into another thing. It’s a genius creation. And one with a decent cost. Working with glamour draws on the energy and health of the worker. Work a little too much glamour and you can be left out of breath, faint and shaky; work a lot too much glamour and you can suffer seizure, fever and death. Great stuff!

It is tempting, having finished Shades of Milk and Honey, to spot the Austen-character templates: the similarities between Mr and Mrs Ellsworth and Mr and Mrs Bennett, or Mr Vincent and Mr Darcy; how Mr Dunkirk and his sister Beth made me think of Northanger Abbey, and Captain Livingston of (cads and bounders both) Mr Willoughby and Mr Wickham. It is also tempting to point out that the language is sometimes a little off, and that Kowal doesn’t achieve Austen’s wonderful sarcasm. But while I was reading it none of these things mattered because Kowal has her own lovely humour, and I was far too busy worrying about Jane, and being cross with Melody, and wondering what had happened to Beth, and hoping that things would turn out as I wanted, and generally being all-absorbed in the story and all-enchanted by the glamour. Small-scale and domestic? Yes. Boring? Absolutely not. I can’t wait to read the rest of this series.

“One must not put trust in novelists, Beth; they create worlds to fit their own needs and drive their characters mad in doing it.”