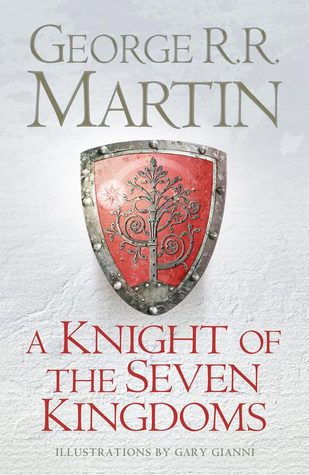 There’s almost no reason for me to say anything about A Knight of the Seven Kingdoms. It is, like everything George R R Martin’s name is attached to, awesome, (not a very original point of view, I know, but what’s a girl to do? The man has a magic brain-box), and it’s not like it’s an unsung treasure people haven’t heard of.

What’s great about A Knight is that even if you haven’t bothered with the behemoth that is Game of Thrones (…???!!!) this can still be enjoyed independently, and if you’re a massive fan then this just adds even more depth and texture to the world of Westeros. It’s pretty cool to see the kingdom before House Baratheon and the Lannisters get their sticky mits all over the kingship, but also to see that it was just as messed up under the rightful, albeit inbred, Targaryens. There’s as much intrigue, back-stabbing, casual misogyny, blood, guts and gore here as there is one hundred years later in GoT, and just because we’re sleeping under hedges with Dunk and Egg doesn’t mean we’re any further removed from it all. It is much more compact though. The book is made up of three fairly short stories, each complete in itself, episodes in the life of hedge knight Duncan the Tall and his squire (and Targaryen prince) Egg: ‘The Hedge Knight’, ‘The Sworn Sword’ and ‘The Mystery Knight’.

In ‘The Hedge Knight’ we meet Dunk as he starts his knighthood, burying the man who knighted him and for whom he was squire, Ser Arlan of Pennytree. Dunk is naïve, and brave, and honourable, and very easy to like. He’s a bit dim sometimes, and definitely out of his depth amidst all the intrigue and politics going on around him when he arrives at Ashford Meadow for a tourney. Egg, on the other hand, is bright, quick, and smart-mouthed, but just a lovable as Dunk. The story quickly escalates and Dunk finds himself having to fight for his life in a trial of seven, a to-become-legendary battle that reads like something out of the tales of King Arthur. It’s a wholly satisfying story and the best introduction these two characters could possibly have.

‘The Sworn Sword’ finds Dunk working for old Ser Eustace Osgrey, a pardoned rebel from the wrong side of the battle of the Redgrass Field, (where a Targaryen heir and a Targaryen bastard fought for the throne). Dunk is involved in the petty squabble between Ser Eustace and his neighbour the Spider Widow over a stream, and has to work alongside the thoroughly objectionable Ser Bennis the Brown. Through Ser Eustace and the Widow there’s a nice exploration of how history just keeps coming back around that I found interesting, but this was my least favourite of the three stories.

Finally, ‘The Mystery Knight’ treads even closer to the still simmering tensions left over from the Redgrass Field. Here Dunk and Egg become unwittingly embroiled in treasonous plottings at the wedding of Lord Butterwell’s daughter. Whereas in the first two stories the larger events of the kingdom felt a step away, here they’re right up in Dunk and Egg’s grills, and they’re lucky to escape with their lives.

A Knight of the Seven Kingdoms is a great book to satisfy Westeros cravings while we’re all waiting for Martin’s next instalment (or the next season of the TV series if that’s your preferred medium). It’s got some lovely humour, nail-biting combat, mystery and adventure. Martin’s writing never ceases to engage and fascinate me. What’s also really awesome about these stories collected together in this one volume is the gorgeous work of Gary Gianni throughout. A huge part of my enjoyment of A Knight was down to Gianni’s images (which took him eighteen months to do); he captures the weight and struggle of combat as beautifully as the hubbub of a banquet hall and the still, sticky heat of drought and his illustrations felt like an intrinsic part of the stories for me. The only thing that could possibly top that would be if Martin had promised to write more adventures for Dunk and Egg … which he did in his post script. Huzzah!