Fly by Night by Frances Hardinge 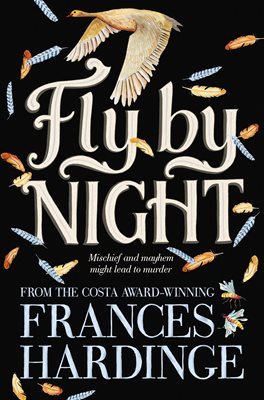 Having decided to take a short break from reading about the Ketty Jay crew and their piratical dealings, blow me down if I don’t find myself reading about criminal types all over again. Fly by Night is the story of 12-year-old arsonist, thief and conman’s accomplice Mosca Mye (surely a criminal mastermind in the making? She even has an appropriately alliterative name … or is it only heroes who have those?), her mountebank companion, the brilliantly named Eponymous Clent, and her curmudgeonly goose, Saracen. The story follows them as they find themselves on the run from Mosca’s home town of Chough and quickly become embroiled in seditious plots and counter-plots and the schemes of the power-hungry in the 18th-Century-London-ish city of Mandelion.

Hardinge has created a richly textured world that feels historically authentic and familiar, and yet completely fantastical. On the one hand, there are link boys and rag-men and printing-presses, and the wealthy wear heeled shoes and powdered wigs and sack-backed gowns; on the other there are river-floating coffeehouses drawn along by kites, a mad duke intent on making the entire city perfectly symmetrical, and a riotous religion peopled with little gods known collectively as the Beloved. This last was my First Favourite Thing about the whole book. There is a god for everything in this world: Goodlady Cramflick is “She Who Keeps the Vegetables of the Garden Crisp” and Goodlady Agragap “She Who Frightens the Harelip Fairy from the Childbed”, Goodman Claspkin is “He Who Carries Our Words to Departed Kin” and Goodman Palpitattle “He Who Keeps Flies Out of Jams and Butter Churns”. Churches and cathedrals are crowded with thousands of statues and altars to the various Beloved, each with their own offerings, ritual words and actions to be performed. And each day a single hour is dedicated to the salute of all these gods, with every bell in the city being rung, that’s known as the Clamouring Hour. It’s just … perfect.

Mosca is a word-loving orphan taught to read by her now-dead father (and something of an oddity as a result – after all, her father “felt a brief qualm at the idea of turning his daughter into a freak by teaching her letters”), who falls in with Clent because she admires his way with words. Clent, plump and past his prime, but an extraordinary liar nonetheless, initially tries to shake her off, before they come to a working arrangement that sees them eventually develop a tentative affection for one another. They’re both out to save their own hides first and foremost, not above selling each other out when necessary, and are sly as cats, but they also both love words and language, and they recognise themselves in each other. Their odd relationship is definitely my Second Favourite Thing about the book, especially when they trade insults:

“Mosca’s opening offer was a number of cant words she had heard pedlars use, words for the drool hanging from a dog’s jaw, words for the greenish sheen on a mouldering strip of bacon.

Eponymous Clent responded with some choice descriptions of ungrateful and treacherous women, culled from ballad and classic myth.

Mosca countered with some of her secret hoard of hidden words, the terms used by smugglers for tell-alls, and soldiers’ words for the worst kind of keyhole-stooping spy.

Clent answered with crushing and high-sounding examples from the best essays on the natural depravity of unguided youth.

Mosca lowered the bucket deep, and spat out long-winded aspersions which long ago she had discovered in her father’s books, before her uncle had over-zealously burned them all.”

There are so many instances of Hardinge’s wicked humour too, from the numerous references to Mosca’s “unconvincing eyebrows”, to the Chinese-whispers spread of news after Clent’s arrest where his name gets more and more mangled and the details get quickly confused; from highwayman Black Captain Blythe’s irritation at having become a hero as a result of the ballad Clent wrote about him, to Mosca’s friend Dormalise (a.k.a. ‘the Cakes’) being very, very saved by Carmine the clothier’s apprentice. Not to mention the fearless Saracen’s many escapades and ability to instil fear in even the hardiest of men and women.

And, of course, after having mentioned my love of character and place names (and words in general) in my last post it should be no surprise that my Third Favourite Thing is the wonderfully sayable names that Hardinge gives her characters here. She is clearly a writer who loves words, and the whole book reads like a love letter to the beautiful multi-cultural patchwork that is language, (some of my favourite words that she uses: gonoph, besmulch, skithered and ghaisted). There are character names like Twence the Potter, whom we never meet, but I can picture clearly; Mabwick Toke and Celery Dunnock; Duplimore Gweed and Sop Snatchell; and Brackle and Grabspite the guard dogs of Chough. Then there’s Goodmen Happendabbit and Grenoble (who keeps knots out of moustaches); Goodladies Jobble and Prill, and Goodlady Mipsquall. And place names like Hummel, Kempe Teetering, Scurrey and Fainbless, (collecting place names is another of my peculiarities and I half-believe I could find all of these on a map if I looked; I mean, I live near places called The Bog, Ticklerton and Shelve, and there really is a place called Wall – as I’m sure Mr Gaiman knew – because the human race will call our home villages/towns pretty much anything).

This was a thick, moist, scrummy slice of cake of a book that I had a blast reading. Even better, there’s another book about Mosca Mye and Eponymous Clent, so while I savoured every word of this one, I have that wonderful feeling of anticipation knowing I can read another of their adventures, because as Mosca herself feels:

“I don’t want a happy ending, I want more story.”