Under My Hat: Tales from the Cauldron edited by Jonathan Strahan 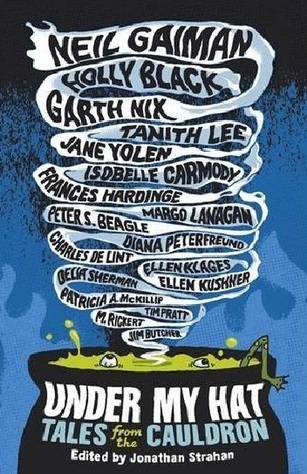 I can’t always decide what to read. I know I’m not alone in this. But sometimes … *takes deep breath* … there’s just so much to choose from and if I pick one book then I’m rejecting a whole heap of others will their feelings be hurt? what will I be missing? what if I die before I get round to reading the one I didn’t choose? and I’m not achieving the numbers I should be and I just can’t quite calm down about the whole thing.

So when I get all overcome with impatience and indecisiveness that’s when a collection of short stories suddenly becomes really attractive. I can read multiple authors without commitment, if I don’t like a story I can quit it without feeling like a Bad Reader (like a Bad Dog, only, you know, not), and the potential for surprise and discovery is multiplied. That kind of makes me sound like the reader equivalent of a philanderer though, so let’s move swiftly onwards…

Under My Hat is great fun. There’s a good mix of adventure, mystery and mild spookiness, and a wonderful selection of witches, both bad and good, to root for. The contents page reads like a contenders list for the non-existent gameshow The Great and the Good of Fantasy (the quietest TV show ever – just a panel of readers on a stage and piles and piles of books. Maybe a group of nervous-looking authors sitting in a pointlessly soundproofed room awaiting the verdict… yeah, that’s never going to work…). I have a lot of favourites, which I have divided into four tidy categories:

Firstly, there are the fun stories like “A Handful of Ashes” by Garth Nix, in which Mari and Francesca are ‘sizars’, students who also have to work as servants at a private school for magic. Another student and her aunt are plotting to break some rather important rules, using a very sinister bone wand and a powerful piece of paper, and all Mari and Francesca have to fight back with is a troop of little witches made out of radishes and a rather special charm bracelet, oh, and an undercover policeman of the magical persuasion. The world is sketched in quickly but thoroughly and the story zips along at a satisfying pace. I think it’s very unfair of Mr Nix not to have written more about Ermine College and the University of Hallowsbridge, I wanted this world to go on and on.

“Payment Due” by Frances Hardinge is slightly darker fun, in which we’re warned against messing with nice old ladies because you never know how their grandchildren will retaliate. It’s a brilliant revenge story and the skin-swapping is awesome, as is the walking furniture (not as Disney as you might expect). And in “Which Witch” by Patricia A McKillip we meet a band (as in music) of witches and their familiars, one of whom is having trouble learning how to communicate with her crow. This story’s fairly light on plot – bad-thing-comes-to-town-gets-defeated – but the crows’ meeting makes up for it; Cawley, Uncle Rakl and Great-Grandmother are fabulous, as are the band members Hazel, Liesl, Madrona, Pyx and Rune, with their catty back and forth:

“Madrona, who lived, slept, and possibly showered in black, said sweetly, “You look nice,” which of course is code for ‘Your grandmother would love what you’re wearing’.”

Next, there are the stories that address what it is to be between childhood and adulthood, like “B is for Bigfoot” by Jim Butcher in which Harry Dresden teaches a sensitive and rather shy half-bigfoot boy about when to use his strength. This story made me reconsider reading the Dresden Files, which up until now I assumed would be that particular brand of urban-fantasy-snooze that just goes on for books and books, (I know vampires are my usual turn-off, but Harry’s shown wearing a duster and a fedora on the book covers, which was close enough). Anyway, I didn’t find Harry at all offensive in this story, he was actually quite sweet, and I liked that it was about a bigfoot, not a vampire or a werewolf.

Holly Black’s “Little Gods” is a lovely story about that in-between stage when you’re a teenager where you feel older and want to be considered older, but don’t yet have some of the things needed to back that up. Ellery wants to discover real magic, wants the world to be less disappointing than it’s shaping up to be. She goes to a Beltane festival with her coven, a wonderfully ordinary group of people, and sees a magical glimpse of what she’s looking for. Black writes a pitch perfect account of teenagehood with a beautiful sprinkling of fairy dust.

My third category is Utterly Beautiful Stories, of which there are two: “Crow and Caper, Caper and Crow” by Margo Lanagan and “The Witch in the Wood” by Delia Sherman. In “Crow and Caper…” Lanagan describes a witch’s journey across a continent to bless her new-born grandchild. At the start I assumed that it was set in a historical or fantasy world, but as I kept reading it became apparent that this was magic in our present day. It’s really beautiful magic too, that works in such a way it seems entirely natural to the world. It half convinced me I could have gone outside and picked up a leaf and done something magical with it there and then. Margo Lanagan just went to the top of the ‘Investigate!’ list.

While she describes a very different and more physical sort of magic, Sherman’s “The Witch in the Wood” felt equally convincing. Her witch shoots a deer, which turns into a man. She heals him and falls in love with him and comes into conflict with an evil wizard as a result. The ideas and the writing here were a whole other sort of lovely and I’m really hoping Sherman has written some books I can hunt down.

And finally, there are the Dangerous Witches. “Great-Grandmother in the Cellar” by Peter S Beagle is just further proof that Beagle is a Fantasy giant. The magic used here is weighty and perilous and so Grandmother has to be dug up from her resting place in the cellar. Only Grandmother is pretty frightening herself, and there’s a price for her help. And in Charles de Lint’s “Barrio Girls” we meet another dangerous witch who kills young Ruby and Vida’s bodyguard Pepe (for fun), little imagining that the girls will get their revenge (with a little help from their friendly local Trickster – ah, Mr de Lint, I do love your stories so).

In “Andersen’s Witch” by Jane Yolen one of Hans Christian Andersen’s most famous characters, the Snow Queen, is very real and the reason for his success as an author. Yolen captures some of the sadness that can be found in a lot of Andersen’s fairy tales (when I first read “The Little Mermaid” as an eleven-year-old I honestly thought I’d never get over it and cried until I got all congested and couldn’t breathe properly), as she describes the deal he made with the Snow Queen, and his subsequent lonely life; but Mr Andersen isn’t entirely without cunning after a lifetime of writing stories.

And last but not least, “Felidis” by Tanith Lee isn’t about a dangerous witch exactly, or about dark magic or death, but it has a slightly creepy, suspenseful feeling to the telling. The writing here is beautiful, as Radlo discovers the cat-like Felidis’ cottage in the woods and sees the healing work she does and falls a little in love with her. There’s a neat twist at the end too that I liked.

So, some new authors to read up on/obsess over/hunt down, some already recognised names to take more seriously (Mr Butcher in particular), and a feeling of achievement and calm. Not a bad couple of days’ work.