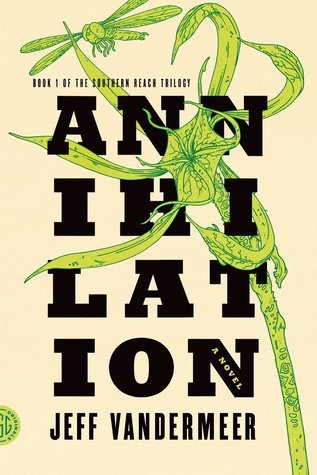 This is a two-part Book Bingo post – category: Read a book then watch the movie.

Oh my goodness, this was just the BEST book. I think it may actually be a perfect book. I was completely enthralled by this intense 195-page story so be prepared for nonsensical gushing from here on in! (Being as it was originally published back in 2014 I’m going to assume that anyone reading has a fairly good idea what it’s about, but I’ll do my best not to spoil anything).

But first this tangent! My brother and I watched The Blair Witch Project for the first time one summer while our parents were away. Neither of us were particular fans of scary movies, but we’re both film nuts and if there’s hype we’ll make the effort to see what it’s all about. The Blair Witch Project terrified us (we went upstairs to bed afterwards back to back and I remember lying in bed unable to take my eyes off my bedroom door because I could see Michael standing with his back to me just like at the end of the movie. It was my bathrobe hanging on a hook there. Worst night’s sleep ever). When I excitedly spoke to my best friend, a huge fan of horror, about Blair Witch she said she’d found it boring because “nothing happened”. This confused me for a long time, but I finally came to see that we are all impressionable in very different ways.

I’m not saying that Annihilation is anything like Blair Witch story-wise (small groups of people entering mysterious wildernesses notwithstanding). But I do feel that they approach storytelling in a similar way, throwing out any attempts to rationalise or control their audience’s interpretation of what they’re being shown in favour of giving the reader/viewer the ‘facts’ as they are understood by the characters in the story. In this way both 2014 book and 1999 film are full of questions. And my obsessive, puzzle-loving brain just eats up that stuff up.

Area X completely captures the imagination. This pristine transitional wilderness in all its verdant, weird glory, the abandoned base camp, the tower/tunnel, the derelict lighthouse, all have the feeling of exaggerated reality that dreams can often have. VanderMeer writes so beautifully about this place that it seems almost hyper-alive with plant and insect life and other much stranger creatures, and there is a feeling of … consciousness? awareness? … emanating from the place that impacts with each of the expedition members at different times. As the biologist tells her story she becomes more and more bound up with Area X, and the reader gets the distinct impression that the four women are being absorbed and assimilated by the landscape in different ways.

The concept of transformation occurs again and again – through the landscape itself transitioning from forest to coast, the biologist’s infection, and her husband’s condition after his return from the eleventh expedition; Area X itself, slowly expanding and returning the region under its influence to an unspoiled state, and the hybrid-ish creatures that the biologist encounters. Even the chapter titles suggest different types of transformation: initiation, integration, immolation, immersion and dissolution.

And it is perfectly fitting therefore, that it should be a biologist specialising in transitional environments to act as the reader’s way in. It is her point of view and her personality that makes the story what it is. The glimpses into her childhood, marriage and work life that she grants us are vivid and packed with sensory detail. Particularly her memories of the pool she was fascinated with as a child, with all its abundant wildlife. She is a character with a rich inner life and little need for other people, and the discovery that her husband, despite his gregarious exterior, also had an interior life is a poignant aside. Her marriage with him looms large at times, even though he is not the reason why she has come to Area X. That two people of the same species can’t know each other or break beyond the surface of things only highlights the complete unknowability of Area X. Even as the “brightening” takes a firmer hold of her the biologist is given no clearer insight into the mysteries surrounding her, and questions like ‘what is happening?’ and ‘why?’ are redundant. It is happening. And she records the changes with as much objectivity as she can, and that same fascination she had as a child, studying the miniature ecosystem of the pool.

Her calm observations in some ways only make the whole story more unsettling. The biologist doesn’t scream hysterically and run away, she stands and faces each inscrutable thing and records what she sees and feels and how things progress. Even when she discovers that so much of what the expedition has been told were lies and mis-directions, undermining any hypotheses they might have made, still she doesn’t become overwhelmed by panic. I often like to try and imagine a story I’ve just read from another character’s point of view to see how it may have been different, but here in Annihilation without the biologist’s voice running through the story like a seam of something precious through rock, I don’t know that it would have been even half as good as it is. She makes the book. She is a part of the mystery of it.

And she offers up a possible explanation for Area X at the end, an educated guess based on her field of expertise as much as on her external and internal observations, that is the closest the reader may ever get to an answer, even while it opens up hundreds more questions. This may be First Contact. Unrecognisable, unquantifiable, literally alien. Something we won’t be able to understand for as long as we remain human, in the same way that we can’t understand a slug’s experience of the world, or a whale’s, or a cacti’s without anthropomorphising or belittling those things.

Annihilation is a book that is a puzzle. It’s a story to turn over and over again in your mind. It isn’t meant to be fully understood or explained, I don’t think. It’s the reverse of that, in fact, it’s a story in which everything is meant to become a question. One of my favourite things about it is that things that seemed hugely significant while I was reading later seemed irrelevant: I was completely taken, for example, with the mirroring of the underground Tower in the lighthouse and the writings found in both structures, but I’m pretty sure that’s not in the slightest bit important to the mystery of Area X. (I still like it nonetheless). And for a little while I got obsessed with going over and over everything the psychologist had said looking for hypnotic suggestions because I was utterly creeped out by that whole thing, but in the end? Not really important at all. (Yet still creepy).

” … we still don’t know what questions to ask. Our instruments are useless, our methodology broken, our motivations selfish.”

This is a phenomenal book. It’s deeply unsettling. Not horrific, but wonderfully compelling, it’s written for the people who are affected as much by what isn’t there as what is. I can’t wait to read Authority and Acceptance, and then to read all three over again together and see if that changes how I view some of the stuff I’ve said here.

Yeah, well, I suppose it was inevitable that I wouldn’t like the movie as much as the book, but dagnabbit I didn’t expect to be so utterly underwhelmed. This isn’t going to take long.

The things I liked: the soundtrack by Ben Salisbury and Geoff Barrow had a real Last of Us vibe for me, which I enjoyed; the bear was pretty flipping awesome and scary as all heck; the plant people and the glass trees were beautiful.

The things that really got my goat: they changed the biologist’s character and her storyline completely unnecessarily; they explained too much; they gave everyone a ‘mysterious’ lemniscate tattoo for no reason I can fathom; they turned the ending into some sort of weird experimental dance video that I didn’t appreciate at all; and where was my tower/tunnel??!! (and the Crawler, and the discovery at the lighthouse, and the writing on the walls, and … and … and … oh, nevermind!!)