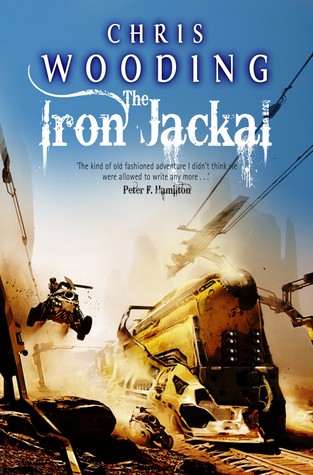 “Welcome to the crew of the Ketty Jay … You ain’t a member till you’ve caused at least one major catastrophe.”

This is my favourite Ketty Jay book so far. It has more of everything I’ve enjoyed in this series and a whole lot less of the stuff that was irking me. After the fairly grim happenings in The Black Lung Captain the crew are back on form here, quipping their way through a fast paced adventure involving an ancient relic, a deadly curse and a lost city. It’s dieselpunk Indiana Jones all the way, baby.

What I liked most about The Iron Jackal is that the crew is a crew now and they’ve all realised it. We’ve learned enough about them, and they’ve learned enough about each other, that they feel solid. They, and we, know what the stakes are. They know who and what they’re fighting for when they wade in, and they care about each other. Not equally; they’re not all loved up or anything like that, there’s not much affection spared for Pinn, for example, or Harkins, but the group feels tight nonetheless. And when Frey falls into a life-threatening predicament, his crew are there, ready and waiting to help however they can.

There are three things, in my humble opinion, that Wooding does really well: he can write the heck out of an opening scene; he can create a creepy, horror-movie amount of tension out of thin air; and he provides his characters with brilliant banter. So from the get go – beginning with a lively chase across the sun-drenched rooftops of a Samarlan city – we’re thrown into a race against time to save Frey from a fate worse than de… yeah, OK, from death. That’s no small thing though, and we get to appreciate how much Frey has grown up in this book. He’s looking death in the face and deciding what kind of person he is, and even I, his least fond reader, have to tip my hat to him because he discovers reserves of mental fortitude he (and we) didn’t know he had. His crew too, in facing the possible end to their time on the Ketty Jay, are beginning to realise just how much they appreciate what their airship home gives them (freedom, protection, safe haven, escape). So everyone throws themselves wholeheartedly into the adventure this time round, even poor, nerve-shot Harkins.

And Frey needs all the help he can get, because the Iron Jackal is a very real, very scary thing. Something that has impressed me about Wooding’s writing from the start has been how quickly he can move from banter and action to chills-down-your-spine scenes of daemonic meddlings. This is why I have enjoyed Crake’s portions of the books so much, I think, because he gets all the creepy, more-dark-than-light bits of storyline. And perhaps that’s why I found the Iron Jackal as deliciously spooky as I did. Frey is usually just a victim of his own stupidity, he’s good for a fight and a bit of repartee, and he’s fun to laugh at. But this time he’s being hunted by something from Crake’s world of daemons and monsters and it’s that bit scarier to read because, unlike his friend, Frey’s really not equipped for this fight. Our first meeting with the Iron Jackal is wonderfully atmospheric and it (mostly) gets better as the book goes on.

Wooding also introduces us to a new character, Ashua, who in many ways is Frey’s female counterpart. There’s some excellent dialogue between her and Frey, (Frey mostly coming out worse off), and she quickly gets the measure of the Ketty Jay crew (although I spent most of the book terrified she was being introduced to replace Jez), so that by the end it feels quite natural that she should stay on with them; (which will remain fine by me as long as Wooding doesn’t kill off Jez in the fourth and final book. He can kill off Pinn whenever he likes, or Harkins, but if he lays one ink-stained finger on Jez I’ll leave all four Ketty Jay books out in the rain). (OK, I wouldn’t do that. But I’ll definitely donate them to a charity shop. And I won’t have nice things to say about it at all). Anyway … we get introduced to a Yort explorer called Ugrik who also contributes plenty to the witty chitchat, (he and Frey come across a statue at one point and their exchange about the statue’s eye had me in stitches* … I guess I found my level right there), as does the dastardly Jid Crickslint, and the wonderful Samandra Bree, the Century Knight. And while the lingering impression I have of The Black Lung Captain is one of grimness it made The Iron Jackal all the more enjoyable – this is Wooding at his grade-A witty chitchat best.

” ‘Ashua, Pinn and Harkins are gonna keep the bad guys busy while we do, and – ‘

They all stared at him. He shrugged. ‘Well, I mean we’re robbing them, right?’

Possibly the greatest thing about this third book however, is that Silo finally gets his story told in a heap more detail. I really loved Silo’s journey and I rejoiced wholeheartedly at the end which promises he will now always be more than just a shadowy presence in the engine room. And with that I’ll say no more, because, believe it or not, I really am doing my darndest not to spoil anything.

The Iron Jackal is another rip-roaring adventure packed with train heists, plane races, prison breaks, stolen treasure, a mysterious city with plenty of nasty surprises within its walls, and the mother of all narrow escapes. There are more great character names like Jid Crickslint, Jakeley Screed, and Maddeus Brink, and we finally learn that Malvery’s first name is Althazar, which kind of suits him. We learn more about the doctor’s past and Jez’s present. There’s plenty more Bess (I love Bess, did I mention previously?) If you enjoyed Retribution Falls (irrespective of how you felt about The Black Lung Captain) you’ll enjoy this instalment too. Maybe, like me, you’ll enjoy it more.

*Well, I have to share it with you in case you don’t get round to reading it yourselves – although taken out of context it might not give you quite as much of a chuckle as it gives me:

7 thoughts on “The Iron Jackal by Chris Wooding”