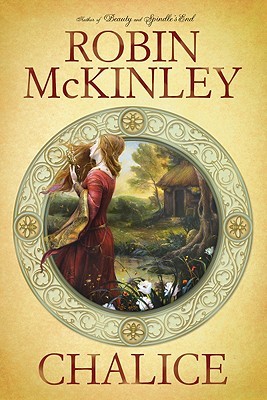 After the utter grimness of A Clockwork Orange I needed to read something comforting, familiar and beautiful. And Robin McKinley will ever and always be the author I go to for that combination. The Hero and the Crown, The Blue Sword, Beauty, Spindle’s End, and Sunshine are some of my favourite curl-up books, but somehow I missed Chalice being published back in 2008 and bought it earlier this year to plug the gap.

The actual story is small – a young woman is unexpectedly given a significant responsibility she thinks she cannot live up to, but does it well (if unorthodoxically) despite herself. The end. But this is McKinley, and so the getting there is just delightful. She creates a fantasy world that runs along medieval lines, divided up into demesnes (domains) that are each looked after by a Master (lord), all united under an Overlord (king). The Master’s House (manor) is the centre of the demesne, and it is there that he and his Circle live – his eleven fellow wardens of the land, with titles such as Clearseer, Talisman, Weatherauger and Keepfast – including his Chalice, the second most influential person in the Circle after himself, always female, responsible for bring unity and peace to the Circle and the demesne alike.

The book is only concerned with one demesne, Willowlands (imagine a small English village where everyone knows one another and spend their days cutting firewood, tending beehives, growing vegetables and fruit and having children; better yet, imagine W B Yeats’ Innisfree). Willowlands lost its previous Master and Chalice violently in a fire, and the land has been thrown into chaos as a result. Only in this world the land reacts physically to the loss of these two symbolic people. Rifts are opening up in fields, there are earthquakes, and fires in the woodlands, the people and animals living there are more prone to sickness and accident. The earthlines are keening with distress. It has been divined (literally) by the Circle that the new Chalice is Mirasol, a beekeeper. Usually the current Chalice would have an apprentice to take the reins in the event of her death, but Mirasol’s predecessor had none and so Mirasol must learn her way on the job, feeling very much out of her depth.

And so the book follows her on her mostly inward journey as she learns to bring peace back to the land she lives on. For all her fears that she is not doing the best of jobs, she still has the gumption to get on with the doing instead of despairing, which is just as well because she has more than just her own role to worry about. Her new Master, also not an apprentice (don’t you hate predecessors that don’t prepare for the worst? Contingency plans people!), has been called home from the priesthood. Only in the world of Willowlands and its neighbours there’s no church, there are instead three Elements you can be dedicated to: Earth, Air and Fire, and the new Master was a priest of Fire. Priests of the Elements undergo physical transformation during their initiation, and so the Master is not quite human any more. His touch can burn flesh and he’s not quite corporeal any longer either.

It’s taken me three paragraphs just to try and give a sense of what the story is about, but reading this little 259-page book is more a process of absorption than slugging your way through an info-dump. And I don’t feel I’ve done the story much justice. It’s really beautiful, in all its smallness. Mirasol talks to the trees and to the land and to her bees and they listen to her. She notices the character of things, like bolshy, bragging lightning and sleepy, slow-moving pools of water. Her bees figure larger and larger in her life as they take to following her around the demesne when she is performing her duties, and producing so much honey for her that her cup literally overfloweth. And the honey they produce starts to take on different characteristics:

“There was a honey for stomach-aches and a honey for baldness; the stomach-ache honey was also good for bed-wetting and night-terrors in children, and the honey for baldness was also good for too-heavy bleeding during a woman’s monthly and for persuading a broody chicken to stop plucking her breast feathers and get back to laying eggs. (This particular combination made her laugh). And there was a honey that was particularly good for burns and wounds. There was also a honey to stop a well going dry, to stop a dog barking and to make fruit tress crop more heavily; and one that seemed to be to make the weather hold long enough to get the hay cut, dried and stacked.”

And the relationship between Mirasol and the Master is lovely too. It can’t quite be described as a love story, but is more like the prequel to their romance, something that will follow after the book is closed. They are two people who don’t think they can do everything that is expected of them, and they identify with each other and come to support each other as the story goes on. They sort of become each other’s anchors.

I can imagine people having lots of sarcastic things to say about Chalice in this age of the grimdark and the epic – and that’s too bad for them. I loved it for all its parochialism, descriptiveness and romance. I loved Ponty the pony, and the heart-breaking intervention by the bees, and the magic of Mirasol’s honey, and the moment with the beeswax candles, and learning how a priest of Fire sees the world through his black and red eyes. It’s all exactly what I needed. It was like being given some of Mirasol’s honey, reading this book; a warm, sweet, golden story that made me feel a whole lot better.

(I read this for my “Read a book with a one-word title” Book Bingo category).

13 thoughts on “Chalice by Robin McKinley”