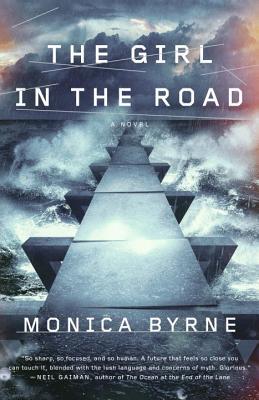 This was both an astounding read, and a disturbing one. It’s not a book I can say I enjoyed wholeheartedly because it deals with some very serious stuff, and yet there were parts that were bewitching, and fascinating, and enticing. There was no point at which I felt I’d have to put it down, but there were points at which I wish I could have done. In case I’m not making myself clear, I feel very conflicted about this book.

I think, on the whole, it was good. Byrne’s two unreliable narrators, telling their stories a generation apart, are compelling, if not always 100% likeable. They are flawed and damaged individuals, whose storylines mirror each other in a satisfying symmetry, and who both have secrets that they are keeping from themselves as much as from the reader. We start our journey with twenty-seven-year-old Meena, living in India in the latter half of the 21st Century, who has just found a snake in her bed and fled her home believing herself to be the target of terrorists. It quickly becomes apparent that Meena is in the throes of a manic phase, possible triggered by this shock, and also that she talks to people who are not physically present (the best way to win an argument, I find). Her aim, at first, is only to get as far away from home as possible. Our second narrator, Mariama, a seven-year-old slave living in Africa in around the 2040s, has also just found a snake in the place that she and her mother live and has run away. It is less clear initially why she is so willing to leave her mother, not knowing where she is, but she seems as intent as Meena on getting far away from where she’s been living. The book then follows these two characters as they journey from East and West towards the same point in space, in Ethiopia.

And Byrne writes both journeys and environments really well. Meena’s Keralam and Mumbai and Mariama’s Dakar and Lalibela feel distinct and alive, bustling with people and smells, sights and sounds. Byrne actually travelled to Africa and India to research her book and it shows in all the wonderful details she’s able to incorporate into her story. She also writes these two traumatised psyches well. Both Meena and Mariama are telling their stories to phantoms from their past, haunted by the things that have happened to them and using unreality and avoidance to cocoon themselves away from the truth. If you’re looking for plot in this book it’s already happened, and it’s the revealing of secrets and the putting back together all the pieces that provides the momentum here. This is the appeal of the unreliable narrator though, isn’t it? Re-reading the first chapter after having finished the book was so cool because I could see just how much Byrne was revealing that I hadn’t picked up on, because, you know, first time round I was taking what the narrator said at face value. If it weren’t for all the more uncomfortable bits, I’d happily do a whole second read-through just to enjoy more of that cleverness.

But. Byrne is writing about a future world in which race and gender have become fluid, and people can alter both with genetic modification. A world in which venereal diseases are a thing of the past and contraception is perfect and administered automatically to both males and females upon reaching puberty. Yet, in this fluid environment, Byrne is still writing a story about sexual transgressions against women. Meena talks of being a part of a new sexual revolution in her teens, but I don’t see it, except that she sleeps around plenty. All the violence (bar one act) in this book is still performed against women. By both women and men, sure, but always against women. Both narrator’s stories are driven by this, and trauma begets trauma throughout, and I just don’t know how I feel about the frequent, visceral details of this kind of violence as they appear in this book, combined with all the other really awesome stuff.

Because this problem aside, The Girl in the Road has mystery, and some great technology, and a story of extreme survival, all of which I enjoyed a lot. The mystery I obviously can’t say anything about without spoiling everything, but I definitely want to talk about the tech. At the heart of the book is this future feat of engineering called the Trans-Atlantic Linear Generator, or the Trail, as it’s generally known. This is a pontoon bridge spanning the Atlantic Ocean that harvests wave energy. It’s smart and reactive to its surroundings and made out of the super-conductor Metallic Hydrogen (which is a real thing, because why make this stuff up when we have actual science). In a world where ocean levels are continually rising this is obviously the way to go. Meena chooses to travel to Africa via the Trail – all 3,188km of it – and needs a whole plethora of even cooler tech to survive the journey: from a camouflage-pod for sleeping in (inflatable, submersible, literally invisible from the outside, made of a polymer that can be cut open with a fingernail and sealed again with a pinch, and actually makes me mildly interested in camping), and a ‘solar kiln’ that can make a variety of dishes out of any biological matter; to the broad-spectrum nanobiotics in her medikit and a very clever diaper. There’s also the more usual future tech like hologram soap operas, retinal scanning, Byrne’s version of Star Trek’s Universal Translator, the glotti, automated taxis and rickshaws, wrist-worn mitters for making payments and a pretty cool thing called an aadhaar which sounds like a visual social media thing that floats round your head like a halo (at least that’s how I pictured it). (I’ve just googled the word ‘aadhaar’ and it is actually a thing in India already, a unique identity number based on biometric and demographic data that residents of India can obtain, voluntarily I presume. So, there, I learnt something today).

The actual journey across the Trail is pretty exciting too as Meena adjusts to multiple hardships, encounters both incredible weather conditions and other people living out on the Trail who all sit on a sanity-scale ranging from a bit odd to utterly batty, (my favourites being the group who want to prove that people can survive on seawater, and the man just a little further along the Trail who bears witness for empiricism – ha!).

My pattern-loving brain revelled in the many crossovers and parallels that occur in the two different storylines too. While separated by some thirty years, Meena and Mariama nevertheless share images, characteristics and experiences that read like echoes: The snakes that trigger their flights from home, eating sea-snake, feeling pain in the solar plexus, seeing ghosts of dead girls; the brief appearance of Fatima and Rahel in both timelines; the importance of languages, and the sea, sky and moon as first concepts at the beginning of both journeys; the importance and reoccurrence of names like Saha and Yemaya; the goddess in all her many forms, from Lucy the Australopithecus in Ethiopia, also called Dinkinesh, to the African goddess of the living ocean, and from Mohini the female avatar of the Hindu god Vishnu, to Durga the invincible.

I love that Byrne has written about a not-too-distant future in which the power of the West has collapsed and Africa and India have risen to prominence. I love that it’s neither utopian nor dystopian in its vision of a world in which sea levels have risen so dramatically that maps have changed and that further changes are happening as the story unfolds – that it’s not about one grand annihilating event that has occurred, but a series of ongoing changes that humanity may or may not survive. I love that for all India and Africa’s political squabbling, the real super power here is the ocean itself. There’s a fair bit I don’t love, enough that I don’t want to own or reread this book, but that doesn’t mean I haven’t enjoyed reading it, or that I can’t appreciate everything surrounding the bits I wasn’t comfortable with. I’m probably all the more impressed with The Girl in the Road because it was able to keep me interested throughout the grimness. In summary: two enthusiastic thumbs up and a big fat trigger warning.

(I read this for my “Go forward in time” Book Bingo category).

4 thoughts on “The Girl in the Road by Monica Byrne”