I did not intend to read this. I already have a healthy pile of books to fail spectacularly at reading for #RRSciFiMonth and this isn’t one of them. But you know how it is, sometimes you get caught without a book (emergency!) and you grab whatever’s to hand. Enter Places in the Darkness stage left … 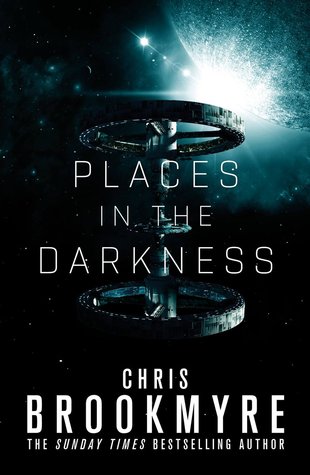 The Ciudad de Cielo, or ‘City in the sky’ (A.K.A. the CdC or SeeDee), is a space station orbiting Earth and dedicated to the building of humanity’s first colony ship. It is a city-sized station populated by the best scientists, doing all the research surrounding the problem of how to keep us alive and well during interstellar travel. It represents humanity’s hopes and dreams for a future in which we can step out of the dirty clothes of our past and in to the pristine white spacesuit of our future. SeeDee is funded by four mega-companies, the Quadriga, and is under no one government’s control, policed instead by a private force, Seguridad, which in turn is under the scrutiny of the Federation of National Governments (the FNG). The station boasts about its virtually non-existent crime-rate and there has never been a murder on Ciudad de Cielo.

Unfortunately, all the residents are human, so things aren’t as shiny-clean as advertised. (It’s no accident that the CdC’s nickname sounds a little seedy – *chuckle*).

The book is split between two POVs, that of Dr Alice Blake, the clever young newbie who will be stepping into the role of boss of the FNG Security Oversight Executive, and that of Nicola Freeman, more commonly known as ‘Nikki Fix’, a corrupt Seguridad cop. This narrative structure creates a lovely mirroring of Alice and Nikki’s experiences. Alice has her eyes opened to the dark and untidy things going on under the surface of SeeDee, while Nikki has her eyes opened to the possibility that she can still do good. They start off at the furthest ends of the moral scale from one another, and as the story unfolds so their relative positions do, until they exist in almost the same space. And I also changed my position as I read. My outlook at the beginning was naïve, I have always wanted to believe in the Star Trek future and the CdC sounded pretty darn awesome, and I got more and more upset and despondent as the various corruptions and nefarious goings-on were revealed. And yet, by the end of the book (and this change of heart was very very connected to the Big Bad plan that Alice and Nikki uncover in the story) Brookmyre had me feeling much more at ease with all the bootlegging, hacking, fight clubs and protection rackets, simply because these were recognizably human enterprises, evidence of our free will and (mis-applied) creativity. Evidence also of some serious inequalities aboard SeeDee, but at least this is something that can be addressed, unlike the rather scary alternative that Alice and Nikki discover at the end of their goose chase.

Maybe this makes it all sound a bit too by the numbers, and I guess it is, but in all the right ways. Brookmyre keeps the action ramped way up for most of the book and the murders are all suitably creepy. A third of the way through I was sure I had it all figured out, and again at about the two-thirds mark, before being thoroughly annoyed to discover that I had been nearly there, but had failed to pay attention to our Dad’s Rule Number One for whodunits: the culprit is invariably the person you least expect, (Dad has always taken great delight in being able to announce who the killer is about ten minutes into the watching of any crime drama … the annoying thing being that he’s right 99.9% of the time. Urgh). The ‘conspiracy’ that is uncovered is pretty awesome too, and there is some great discussion about free will and perspective and consciousness which I really loved, but if I go into any of that I’ll only give away the best bits of the story.

Without a doubt SeeDee is the star of the show, however. This station, where great minds gather to ponder humanity’s future, is the dry run for the colony ship it hopes to eventually birth, and the underbelly of all those good intentions is unavoidable. Nikki observes in one of her chapters that some people with painful memories attempt to escape to SeeDee only to find they have brought their troubles with them, and this is right at the heart of the book. No matter what our hopes for the future, it’ll be built on all our losses and heartbreaks and fear and pain, and there will be no escaping any of it. We’d do better not to try, but rather to make peace with our dark selves before we attempt the journey.

14 thoughts on “Places in the Darkness by Chris Brookmyre”