I don’t know how long I’m going to manage coherency here, before this just becomes one long gush of everything I loved about this book, but I’ll give it a go. 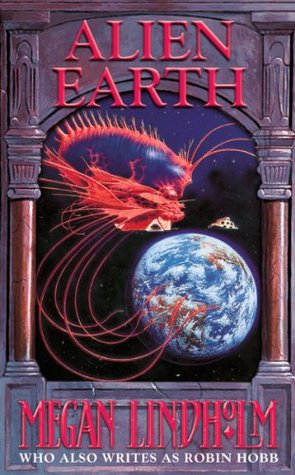 Megan Lindholm (A.K.A. Robin Hobb), writes characters and the tensions between them so, so well that I found myself gnawing at my knuckles and completely unable to disengage over the two days it took me to read this book. I got angry, I got frustrated, I chuckled, I nearly cried, I sighed a huge, heartfelt sigh of relief at one point … man, it was a great ride! For good or ill, I am now firmly aboard the Lindholm/Hobb train. (And not likely to run out of reading material anytime soon, therefore).

What it comes down to is that I really admire her skill with characters. In Alien Earth she focuses on a small cast of five, but they are five distinct personalities, three human, two alien, and they all experience their own full character arcs over the course of the book. John and Connie, Conservancy-era humans born and bred, are both quite difficult to like at the beginning (John gets described as a “prick” numerous times in the first few chapters, and Connie just hunches her shoulders whenever she’s spoken to), but they both improve upon further acquaintance. Raef, an Earth-born human deemed unworthy of a new life under the Conservancy, at first seems a bit redundant within the story except as a tool for comparison, but as his story unspooled I think I came to love him best of all the humans. Then there’s the hateful, spiteful, manipulative, patronising, self-important representative of the Arthroplana, Tug (I wasn’t fond of him – the first note I made about him while reading was “not sure I like Tug”), who sneers at humans while also being fascinated by them. And there is Evangeline the Beastship. Evangeline is … awesome … in the full sense of the word.

The basic outline of the story is that centuries ago humanity was rescued from a dying Earth by the Arthroplana in their Beastships and bought to the twin planets of Castor and Pollux. Having damaged its home planet so completely, humanity must now make amends by making as little impact as possible on their new worlds. Castor and Pollux both have cooperative ecologies very different to Earth’s competitive one, and humanity is becoming less and less recognisable as the Human Conservancy and the Arthroplana implement changes to keep the species “in harmony” with the world around it. Humans are smaller, have a much longer lifespan, remain in a prepubescent state for nearly the first hundred years of their lives, and can no longer reproduce without intervention. However, there are some who believe that Earth may not be as thoroughly dead as the Conservancy insists it is, and so John, captain of the Beastship Evangeline, is hired to return to Earth and find out how she’s doing.

The journey through space isn’t anywhere as near as important as the personal journey each character then embarks upon. And this is probably where I’m going to lose my shit, so be warned. (Also, SPOILERS).

For John and Connie, who have both been branded as “unadjusted” (that is having undesirable and inharmonious characteristics) in their pasts, Earth is both a potential refuge and a horror, a planet they are unequipped to survive on even if it is still habitable. But in going there they are given the opportunity to look at how they have been labelled and decide for themselves, outside of the rather claustrophobic atmosphere of the Conservancy, how just or unjust those labels were. Connie’s healing is particularly poignant (and was incredibly personal for me). For Raef, rejected a place in the new world because of a physical weakness (he has cancer) and a stowaway in one of the Waitsleep wombs deep within Evangeline where he dreams his slowed-down life away, the journey doesn’t matter at all, but his developing relationship with Evangeline does, very much. And for Tug the journey involves a number of well-deserved rude awakenings and a lovely big comeuppance, although of all the characters he’s the least changed in heart and mind.

Evangeline’s journey is the most momentous though. The Arthroplana see Beastships much in the way that we perhaps see dogs. They’re individuals, they have some intelligence, they are eager to please and desirous of companionship – all of which makes them eminently trainable to our will. The Arthroplana are wrong. Evangeline has been cowed into a small and boring existence of servitude by her training. She is utterly charming from the get go, desperately trying to be a good Beast, greedily lapping up any small attention she receives from her owner Tug, taking his paltry offering of the game of Tic-Tac-Toe and rendering it “harmonious” by eliminating all the Os so that Xs win, always and forever. But Raef’s vivid dreams tickle her interest and she learns through him how to exercise her imagination. A dangerous thing, as she chooses to imagine her life without Tug’s control. Evangeline’s subsequent meteoric rise out of slavery is beautiful to behold. And her friendship with Raef is likewise beautiful. He gives her the language and images to become more fully what she should always have been, and in return she enables him to finally put his overwhelming anger in its rightful place. Labelled, bullied and belittled as a child Raef’s healing is as important as Evageline’s. As important as Connie’s. And they all come about through connection. Tug, physically connected to Evangeline, encysted within her, feeding via her, not a symbiont so much as a parasite, is the only character who proves unable to really connect or empathise with any other character, and because of that he cannot be saved.

Raef’s childhood friend Jeffrey says “the only real pain is when you can’t be who you really are”, which sort of sums up Alien Earth pretty neatly. Away from our home planet, undergoing more and more adaptations to try to fit into worlds we were not originally evolved for, humanity is becoming less and less viable. I loved the almost throwaway scene where Connie goes to the area of Delta Station where the elderly live. Here there is graffiti against the Conservancy and “Timely Terminations”, public benches are overturned and people have real barriers up at the entrances to their homes (a punishable offence). Later on in the book it’s mentioned that the number of Adjustments is on the rise. John loves his life as a Mariner for its long periods of Waitsleep, lost in dreams and well away from the society that has denied him the right to ever stand upon a planet’s surface. Waitsleep appeals just as much to Raef, who dreams his life over and over the way he’d have liked it to have gone. And Evangeline learns to dream, to “pretence”, as her first step towards becoming who she really is.

Being who we really are is something I think we all struggle with at some point in our lives. This is a wonderfully hopeful book about the benefits to be gained from being so.

Oh man, there’s so much more to love that I haven’t mentioned!

The layers of descriptions of Tug throughout the book that slowly build up our mental picture of him, beginning with his foreshortened arms and his feelers, building with his “fluke-like” midsection, his scolex and his nematocysts, his back plates, recessive mandibles and gas bladders, before Raef finally sums him up as “a huge pink earwig”.

The descriptions of Evangeline in all her tendrilled, fanned glory, in comparison.

The Conservancy’s slow but sure eradication of all of humanity’s literature (horror of horrors), and the pirate trade in books and poetry.

John and Connie’s first reactions to Earth. Particularly Connie’s. How they revise their opinions. Lindholm’s beautiful descriptions of a truly alien Earth.

Tug’s obsession with and Great Study of Humanity’s Mysteries – that is our detective novels. Another Arthroplana is equally absorbed in a study of the “nok-nok joke”. These are the aliens denying Humanity access to space travel for goodness’ sake.

Raef’s room at the end of the book. All the feels.

(Claiming this for my “Spaceships!” Book Bingo category).