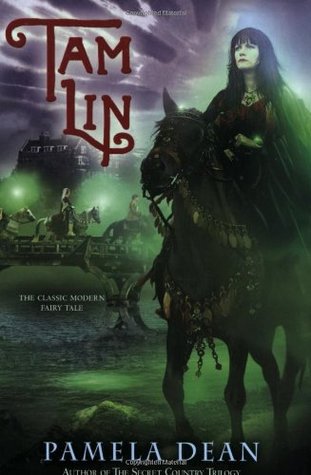 Reading Tam Lin is like reading two parallel stories – one a straightforward tale of college life, the other a much stranger and more magical brew. It shouldn’t work, but it does and does it so beautifully that I fell completely in love with this book.

The main reason Pamela Dean’s blend of college and magic works so well (and this is something that she captures brilliantly) is that the time spent at university is a time unto itself. Not only is it a transitional period for those who go, it is also cut off from everything before and after it. University is nothing like the home and family you’ve come from, nor is it the working world into which you will subsequently go. It’s a place wholly wrapped up in itself and as such is the perfect setting in which to meet the otherworldly. Blackstock College even more so with its lovingly described campus surrounded by ancient cedar trees and maples and ash, a stream, woods and two small lakes. Even its less beautiful bits, like the ugly shoe-box-shaped Forbes dormitory and the reflective glass box of the Music and Drama Center are affectionately depicted, so that the whole place takes on the aura of an enchanted space.

The magic at Blackstock is all seen out of the corner of the eye, or is seen but not understood until later. In fact, Tam Lin isn’t a book that can be enjoyed fully on the first read-through. It’s not until the second and third readings that you start to appreciate some of the jokes and more puzzling comments, or really understand the magic that is happening. It’s all worth the effort though: I thoroughly enjoyed all of Nick and Robin’s banter on my second read-through, that on my first I had been mostly confused and annoyed by (who talks like that for goodness’ sake? And when have you ever met a boy who smells of lavender or rue??).  I’ve loved everything to do with the Fourth Ericson ghost on all my read-throughs and will continue to do so. The mystery of Peg and Sharon’s bunk beds likewise. And the way that the source ballad’s story is worked into this with its inevitable and much more obvious magic is clever. That Dean is able to do it and not break the reader’s suspension of disbelief (or Janet’s) is another little bit of magic in itself.

It helps that all the magical goings on are worked in and around all the oddities and traditions of Blackstock itself. Late night bagpipe playing and horse-riding at Halloween gets mixed up with the hiding of the bust of Schiller and the poetry graffiti in the steam tunnels under the campus, so that none of these things seem strange. Melinda Wolf’s flower and herb wreaths on her door and the books thrown from Ericson that are/aren’t library books become entwined with all the quoting of Keats, Shakespeare, Milton and Homer and the college’s running joke that all Classics majors are mad. Food fights, ritual Pill-taking and performances of Hamlet, Rosencrantz and Guildenstern are Dead and The Revenger’s Tragedy blend with “Thomas’s transformation from a raging maniac to a soft-spoken charmer” and Janet’s inability to think clearly about certain things while at Blackstock. In the end everything is strange, and so nothing is.

“People were very strange, oneself most emphatically included.”

The characters are just as carefully drawn. Janet is wonderfully pragmatic and poetic, furious and funny, smart and curious. I love her familiarity with Blackstock and the feeling that I am always seeing it through her eyes. I love her roommates Molly and Tina and the relationship that develops between the three over the course of the book. I particularly love Janet and Tina’s relationship because it seems so true to their age and situation. Living with someone other than family for the first time does mean you rub up against different world-views and I think Tina gets a raw deal from Janet, who paints her at various times as the Unimaginative One, the Jealous One and the Ordinary One. Maybe I feel for Tina too because she gets so very confused when Janet and the others all start quoting Shakespeare. I studied English Literature and History for six years and I couldn’t always tell who or what they were quoting, so what chance does poor pre-med student Tina stand? And isn’t Janet really just a bit jealous of Christina for being tall and athletic and able to get up early in the morning and be cheerful about it? The boys Thomas, Nick, Rob and Robin are all a little enigmatic and far too charming to be real college boys; Nora, Sharon and Peg are a lot more convincing both as teenagers and students, and I wish there was more about them in the book. And is it an especially British perspective to think that they are all of them just a bit too smart, a bit too sure of themselves? Are American college students that much more confident and certain of their path than their British counterparts? Or is this the only flaw in an otherwise near-perfect book? Maybe Dean needed these characters to be that much more mature so that they could carry off their performances.

Magic and the slightly unbelievable maturity of free-roaming teenagers aside, I loved so many small things in Tam Lin too. I loved the glimpses of Janet’s family and home life, and that the family dog is called Vincentio. I loved the Pink Curtain pact that Janet, Molly and Tina make. I love the Meeb, a.k.a. Amoeba (a.k.a. Pye Wacket). I love that the various theatrical performances Janet goes to see over the course of the book always mark some movement in her personal story. I love that at the end of my first read-through of Tam Lin I had a longer tbr list than I did at the beginning. I love the attention paid to the passing of the seasons and the colours of the trees and the weather. I love all the lavish quoting that goes on. I love that Greek comedy and tragedy have as much place in this book, whose source material is a Scottish ballad, as Shakespeare does. I love that on her bedroom door at home a younger Janet painted the legend “Say ‘Friend’ and Enter”.

Dean’s version of faerie magic in the mundane world is wonderful. The flirtatious way in which this magic moves through the book, glimpsed from afar, its presence almost always felt more than seen, is so much fun to read. This is a book about books and college, about friends and lovers, about the mysteries and decisions of life. It’s a book that gives more up the more times you read it. It’s the kind of book that makes you look for magic.

‘Do you read children’s books?’

‘I’m afraid so,’ said Nick. ‘I started when I was young, you know, and never got out of the habit’.