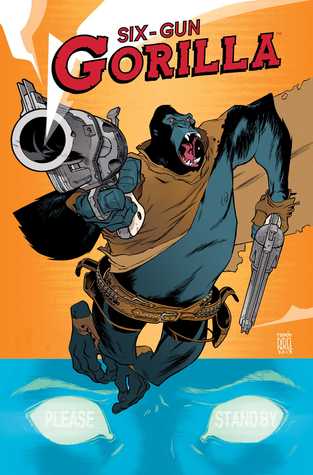 If you see something entitled Six-Gun Gorilla you buy it, right? Of course you do! It doesn’t matter that you don’t know what it’s about. I mean, you notice that it’s by Simon Spurrier of 2000AD fame, so you know your brain is gonna love it. And the artwork is by Jeff Stokely, so you know your eyes are gonna love it. But, and I may have mentioned this already, it’s called Six-Gun Gorilla for Pete’s sake! What more do you need?

Six-Gun Gorilla is a graphic novel about an ex-Librarian, a gun-slinging gorilla (obviously) and a future in which the obsession with reality TV has cranked up a couple of notches. All “Blue” recruits heading into the ongoing battle with the rebels of the Blisterstate have a “psychic tumour” implanted in their head so that the paying audiences at home can experience everything that these recruits (for which read: cannon fodder) go through. Replaying the ‘best’ deaths of the day is a feature of this new entertainment, and, because it’s all about the money, adverts run constantly. Viewers at home immerse themselves with viewing helmets, or if out and about, a TV visor.

The Blister, in/on which most of the action takes place is a minor miracle of world-building. It’s never 100% clear whether it’s another world entire, another dimension, or a limbo between dimensions; or even if it’s real or imaginary (not that there’s not plenty of information thrown in, I just feel like you’re supposed to decide for yourself), but it’s beautifully rendered by Spurrier and Stokely and as important as any of the characters. Electricity and combustion don’t work within The Blister which leads to some interesting swap-outs: Giant tortoises act as personnel and heavy artillery carriers, mutant ox, horses and, in one instance, bicycles, are used for transport, guns are clockwork or pneumatic, there are some odd psychic weapons like choirshot and psi-blockers, and then there’s the titular gorilla’s two six-shooters … wait a moment … that shouldn’t work, and yet, they do. Then there’s the weather: prehaze, blisterquakes and the blaze, all as dangerous as they sound; and the local fauna, the tumblesquid, creatures made from the substance of the Blister itself, and seemingly sentient. The Blister reacts to the people fighting over it, emotions manifest physically in the environment and this leads back to those interesting thoughts about what The Blister might actually be. It’s all pretty awesome.

But there’s more. Blue-3425, the ex-Librarian now foot soldier for the Blister Expeditionary Forces, may be on/in The Blister, but his story is very human and recognisable, a story about love and sorrow, and the importance of memory. The Blue recruits, A.K.A. “holeheads”, are suicide squads, people who don’t want to live, criminals from death-row, or people who have terminal illnesses that choose to go out with a (non-combustible) bang in the colonial wars rather than commit suicide, wait for their fatal injection, or sicken and die slowly. Our Blue has lost everything, his wife, his house, his car and his job and signed up out of despair. In his previous life, he worked on and was obsessed with old pulp stories, living more in stories than out, which eventually cost him his marriage. As he gets drawn into events in The Blister he and the mysterious gorilla he meets out in the desert discuss the nature of stories, while fighting off a great many people who are trying to kill them both. To say more would ruin a lot of the comic’s surprises (and there are some kickass surprises in store), but I can throw out a few teasers: Blue-3425’s ex-wife Sue plays a part in the over-arching plot which is deeply satisfying; hired killer Auchebran is hilarious and disturbing in equal measure; the tumblesquid creatures are utterly awesome – I could have stood a great deal more of them; and the gorilla gets all the best lines. Finally, at the end of Blue-3425’s story, I cried … and if you don’t feel just a little choked up when you get there then I suspect you’ve had something removed. Probably your soul.

Humans are all about stories. We tell them to ourselves and to everyone around us every day, we look for them in all things, use them to explain, encourage and persuade. And we hunger for stories. It may ‘only’ be a graphic novel, but Six-Gun Gorilla looks at that hunger, looks at how stories are both empowering and humanising, and how they help us make sense of our lives. Whilst also making full use of a cloaked and gun-wielding gorilla badass.

What more could you want?

Six-Gun Gorilla was originally a comic from the 1930s that appeared in Wizard magazine. You can find out more here, if so inclined.