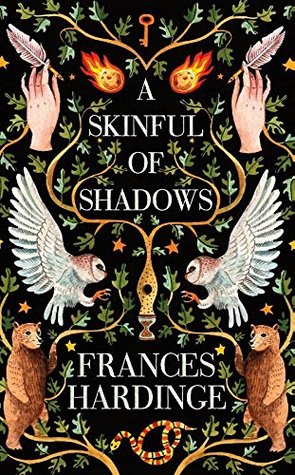 I’ve only read Hardinge’s two Mosca Mye adventures Fly by Night and Twilight Robbery previous to this, but from them I got the definite impression that she is an author who loves language and history, who’s irreverent, generous and nonconformist. Certainly an author I want to read more of. I’m extremely picky about the YA fiction that I read because most of it is such twaddle (love triangles, sparkly vampires and the like not being my cup of tea at all), but Hardinge is just fabulous.

A Skinful of Shadows is a less gleeful tale than those of Mosca and Eponymous, but it is still gorgeously told, and this time rooted very firmly in the beginning of the English Civil War. It deals with themes like inheritance and power, doesn’t shy away from critiquing the concept of aristocracy or pointing out that both political and religious beliefs can cause a lot of damage, and fiercely champions the underdog. If you’re an animal lover there are several scenes that will give any faith you have in humanity a hearty kick in the balls, so there’s a big fat trigger warning right there, but Hardinge also gives us an incredibly compassionate and feisty heroine in Makepeace Lightfoot. And, of course, she’s written a really very creepy ghost story that successfully freaked me out in a couple of places (not that that’s difficult to do as I’m a huge wimp, but I can still identify quality chills from cheap scares and this is the good stuff).

The plot is fairly dense, but roughly speaking it goes a little something like this: Makepeace’s mother has gone to great lengths to keep her daughter away from her father and his family, and to prepare her for her uncanny paternal inheritance. Because Makepeace can harbour multiple ghosts within her mind, and her father’s family, the aristocratic Fellmottes, use this ‘gift’ to preserve long-dead members of their family in a deeply creepy and not-a-little vampiric practise that most often destroys the mind of the host. In what is going to sound like a very disparate series of events, after her mother dies in a riot Makepeace accidentally takes on board the ghost of a dancing bear, then gets shipped off to the Fellmotte’s ancestral pile at Grizehayes. Here she meets her half-brother James, another by-blow, and … dark and twisty adventures ensue.

Makepeace’s journey loops through both Parliamentarian and Royalist territory, and she encounters Puritans and Catholics – and acquires ghostly passengers from both sides of this great divide – as she attempts to work James and herself free of the Fellmotte family. But her connection to Bear is both her start and end point and everything about this relationship dictates all her others. When she first takes his spirit on board after seeing his mistreated body abandoned where it fell on the marshlands, she does so without fully understanding what she is doing, but out of an overwhelming compassion.  Grieving herself, she recognises Bear’s hurt and feels a kinship. Equally, having just attacked Bear’s owners with a wooden stool for torturing the creature, she and Bear share a rage also. It takes time for the two to get used to one another, but a lot of Makepeace’s strength and patience is a result of their symbiosis. Some of the most beautiful bits of writing are Makepeace appreciating the world through Bear’s senses: “dropping to all fours in the kitchen garden, and letting Bear contentedly amble her body through the cold, dew-laden grass”, and accommodating him within herself:

“Over time Bear had learned to accept the kitchen, in spite of the heat and the noise. He knew all its smells now. He had rubbed himself against the door jambs to make them his, so the kitchen felt safer.”

She is his protector and he is hers and through one another they achieve a peace they may not have got to on their own.

Which is just as well because being part of the Fellmotte family, even an illegitimate one, is enough to destroy any peace of mind you ever had. Forever. From her first meeting with Obadiah, the head of the family, Makepeace (and Bear) know that something is very very wrong, a feeling that is only compounded with every new bit of information – none of which I plan to share with you. It’s safe to say Sir Marmaduke is terrifying in the orchard, Lady April is consistently unsettling throughout, Sir Thomas becoming the head of the household is not good at all (poor Sir Thomas), and Symond is no better than the rest (which is the understatement of the year). Running away is scarier than staying put, staying put is a special kind of scary on its own, and when the protagonist feels that she has more in common with the geese she fattens up for slaughter than with anybody else in the household … well … you get the idea, it’s pretty scary altogether. But Makepeace isn’t one to go without a fight, nor does she believe that just because something has always been done it always should be done.

The historical setting is perfect for the story where this conflict between the old and continuation (the Fellmotte Elders) and the young and change (Makepeace and James, and Symond, sort of) is being acted out on a much grander scale within the country. The English Civil War is a fascinating period of history in its own right, as the country struggled with religious and political concepts that shaped everyday lives, and Hardinge does a beautiful job of bringing this world to life, incorporating both commonplace details and some of the more curious facts; a few of my favourites being the gold smuggled into the King’s Oxford court via barrels of soap (he had a whole network of laundress spies – so cool!), women cross-dressing in order to fight, and some fantastic medical practices such as putting someone’s head in the mouth of an oven to cure their melancholia and squirting some sort of beetroot concoction up their nose to “cool the cauls of her brain” (which puts me right off time travel, I have to say).

Hardinge’s prose in A Skinful of Shadows is very different to that of Fly by Night and Twilight Robbery. The language is … plainer, somehow, and I wonder if this is because she is writing about a real historical period, with all the obligations that entails, or because it is a darker story in which some of the play of her other books wouldn’t quite fit. Whatever the reason, it is still beautifully written and there are glimmers of something richer occasionally, some lovely bits of vernacular (favourites: “selling them a tarradiddle” – telling tales; “soft-headed little doddypoll” – an insult, naturally; and the beautiful “chirurgeon” – an early form of the word surgeon) that comforted me when I worried that maybe Hardinge was moving away from that language-love I associate with her.

There’s loads to love about this book that I haven’t mentioned. I could spoil so much. Suffice to say, some books are roughly the same kind or awesome for everyone who reads them, whereas others will mean different things to different readers. And this is the latter kind of book. The things I loved about this won’t necessarily be the things you love. You may not care so much about the turnspit dog (although if you don’t I’ll want to know why), or notice the significance of the various names Makepeace uses on her journey and how she grows into the name that “made her feel a bit unreal” way back at the start of her story. Instead you’ll notice things I completely missed and care about different things. The important thing is that you read it and see for yourself. I heartily recommend that you do.

9 thoughts on “A Skinful of Shadows by Frances Hardinge”