This book had me captivated from the first page. The city of Troon isn’t really all that important to the story, nor do we spend any time there once we’ve met our heroes Smith and Lord Ermenwyr, and company, but Baker opens with a description of that city, whose wealth rests upon the making of flour and whose inhabitants all suffer from emphysema. Thus, there is a Festival of Respiratory Masks. If you don’t crack a smile at that, then this book is not for you. 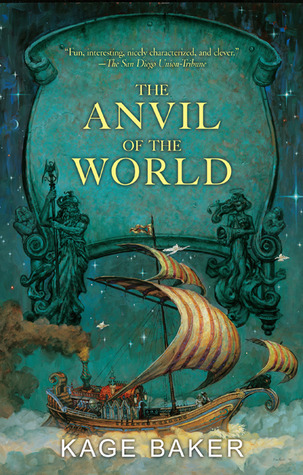 I believe Kage Baker is better known for her science fiction, particularly her Company books, which I hadn’t heard of until I looked her up after reading this. If those books are even half as good as The Anvil of the World I’m going to love them, because this book was awesome. The best first read for #wyrdandwonder I could have hoped for.

It’s a novel that would possibly have been published in three parts if published now. It definitely feels as though it was written as three novellas, and loosely speaking the first story is about a caravan journey, the second about a murder investigation, and the third a rescue mission. Sort of. What the overarching story ends up being much more interested in is whether the Children of the Sun “given to sins of an ecological nature” as they are, and ignorant and argumentative besides, deserve to survive. The number of jokes that Smith, as the Children of the Sun’s representative in the book, is the butt of could have been unkind, but Baker isn’t out to condemn or belittle, her humour is generous and inclusive. She encourages us to laugh at ourselves.

“Aren’t you going to cauterize it with something?”

“Do you use a sword to cut through flowers?” replied the Yendri, extracting the bolt and regarding it critically. “Ah, but I forget: you people do.”

There’s plenty of jokes about autopsies and birth control, crop rotation, attitudes to the environment, the intelligence of whales, and the nature of good and evil. One of my favourite things about the world Baker has created is that the Living Saint (also known as the Unsullied Daughter, the Green Saint and the Unwearied Mother) worshipped by the Yendri has confounded her believers by marrying a demon Lord of Darkness, the Master of the Mountain. And, as befits her personification of bountiful life force, has then proceeded to have lots of children.

One of whom is Lord Ermenwyr. There should be prizes not just for writing great books, but also for creating great characters, because Ermenwyr is a stroke of brilliance. At times a foppish hypochondriac, a hedonistic youth, a whiny teenager and a terrifying half- (or quarter-) demon, he wasn’t a character I particularly liked to start with, and yet ridiculously, inconceivably, he was absolutely my favourite by the end. He abuses substances like they’re going out of fashion, he’s as sex-mad as only a young and wealthy demon with time to spare can be, chaos follows him wherever he goes, and yet he’s definitely someone you want on side when there’s a murder to solve and a dead body to get rid of, his gratitude knows no bounds and his childhood reminiscences are worth sticking around for. If there was a book solely dedicated to him, his family and their antics I’d be made up.

Other characters are equally satisfying. I loved Mrs Smith (no relation to the male Smith, just another person in need of an alias) and all the hints and glimpses of a life very well-lived that she provides between puffs on her pipe of amberleaf. Her passion for and skills in the culinary arts are near supernatural (two-time winner of the Troon Municipal Bake-off, don’tcha know?), she’s remarkably perceptive and a force to be reckoned with. Smith himself is just as much fun. An assassin trying to go straight, his reactions sometimes get the better of him (don’t go making any sudden moves, ok?), but he’s hard-working and easy-going and generally pleasant to be around, although he does get injured quite a bit (through no fault of his own) over the course of the book. I loved the relationship between the two of them and how it changes over the course of the caravan journey to Salesh-by-the-Sea and then their setting up a hotel at the resort. Again, these are characters I’d happily read more about for no other reason than they’re incredibly likeable and funny.

“I never saw a man bleed the way you did and live.”

But I’m making it sound as though this is a tame stroll through a gently landscaped parkland, aren’t I? It’s not! From the get go Smith and company are attacked and ambushed at every bend, there are catastrophes a-plenty and screaming children (!!) and Smith says “something unprintable” several times. There’s romance in the face of prejudice, murder, the destruction of religiously significant sites, war, some spectacular food, another festival of questionable taste, and several Chosen Ones of various types.

All in all, this is the best kind of fantasy there is. It’s funny, but the world-building is still beautifully done. It’s got some really rather serious things to say, but most of the characters are charmingly distracting. It feels as familiar as a comfortable armchair, and yet Baker does things in her own way so that it’s not at all predictable. And it’s hopeful. Yes, the Children of the Sun are terrible, they don’t think about their environment, they don’t respect other cultures, and they’re not terribly bright (sound like anyone we know?), but there’s always hope. They learn, but slowly. They love and appreciate and care just like anyone else. And as Smith himself proves, they can change. Just because they’re good at destroying things, doesn’t mean they want to. And in Baker’s generous universe intention counts for a lot.

P.S. Forgot to mention – I lovelovelove that cover art by Tom Kidd. It’s like something I’d have picked up when I was a teenager just for the cover. The shade of green, the Living Saint and the Lord of Darkness on either side, the extravagant ship, the butterflies, the stars … I’d have been in raptures then. I’m in raptures now!

14 thoughts on “The Anvil of the World by Kage Baker”