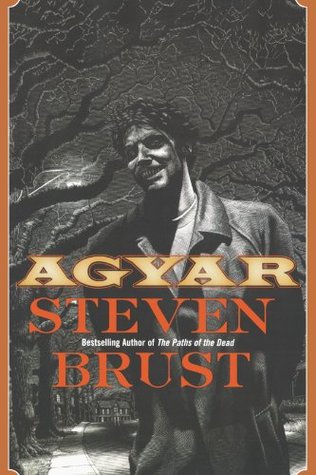 I read this after reading Little Red Reviewer’s intriguing and brilliant review, which you can read for yourselves here. And before I say anything more I will second her injunction: if you plan to read this DO NOT read any blurbs for it, not online, nor on the book’s jacket and definitely, definitely don’t Google it.

OK, with that out of the way …

I don’t understand how this book isn’t better known. At worst it should be on reading lists in colleges and universities to show how something can be really well done, not misdirection exactly, but the controlled use of words to present only parts of a picture in the interests of creating tension and curiosity and mystery. Brust writes so completely from his protagonist’s POV that information the reader would find important isn’t mentioned because it is of absolutely no importance to Jack Agyar.

At best this should be one of those books that everyone knows about via word of mouth, but which, by unspoken consensus, no-one knows fully about until they have read it for themselves. (I am very fond of this idea of a worldwide collusion of readers all keeping the secret so as to protect the experience of the first-time Agyar reader).

I followed all the rules: I didn’t read any blurbs (when did blurbs become a thing? I don’t imagine the books in 18th Century circulating libraries had blurbs … maybe the paperback brought with it the blurb – I shall have to investigate), I didn’t even so much as look at the cover of my copy when it arrived in the post. I went in blind and read the entire thing in a day. Despite all that I worked out the reveal before it was … ahem … revealed (although there isn’t any hard and fast reveal, more an accretion of details until there is only one conclusion to be drawn), but I think mostly because I was looking for something to be discovered, (and because I’m that annoying person who guesses who the murderer is before the end, or works out that the boy in that book is really a girl, because I can’t stand not knowing and my poor little brain goes into overdrive to work this stuff out). And that doesn’t even matter because I was too busy enjoying the skill with which Brust was delivering the story.

Jack Agyar is ambiguous. I can’t say I liked him immediately (we meet him at a party where he’s not being his best self), but I found him intriguing and, well, the book was a puzzle to be solved so I was going to read it no matter whether I liked him or not. It turns out he grows on you. His relationship with Jill doesn’t show him in a great light, but his relationship with Susan makes a better impression, as do his diary pages as he warms to the idea of writing:

“… I guess there isn’t much satisfaction in talking about how I shower, eat, read the newspaper, and sleep. It’s only when I meet someone and we affect each other that I feel I have anything to write down.”

How Jack is affected by his new relationships with Jill and Susan and his longer-standing relationship with Laura is the substance of this novel, and while that all sounds a bit pedestrian and ordinary, it’s anything but. One other relationship that has a bearing on the story is that between Jack and his housemate Jim. Jim is awesome. He is also Jack’s only anticipated reader (until the very end), and Jack occasionally addresses him directly:

“(I used to be very superstitious, but then I learned it was bad luck. A little joke there, Jim).”

Which cracked me up. As did Jack’s obsession with his “natty” coat and his insistence on calling the typewriter he uses to write his diary “the typewriting machine”.

In case you can’t tell, I’m being super careful about what I mention so that I don’t inadvertently spoil anything for anyone who hasn’t read this yet. And there’s not a lot more I can say without getting dangerously close to letting something slip, but I’m not finishing up before I mention Jill again. When Jack first meets Jill I wasn’t terribly impressed. And when we meet her housemate Susan, who’s quite lovely, Jill seems even less impressive. However, she’s not the wet blanket I took her for, in fact she’s quite the opposite (I feel like I owe her an apology and feel quite bad that I can’t make one because she’s fictional, which is dumb, I know) and I’m more impressed with Jill than with any other character in Agyar’s small cast. Her final scene is touching, but I also made a silent ‘hurrah!’ for her when I read it. Brust did a good job with her.

This is definitely a book that needs to be read twice. The first time, not knowing what to expect, and the second time knowing what to look for, so you can appreciate everything that Brust achieves with it. It’s not, however, a book that will go on my re-read pile. It’s really clever and I enjoyed the skill with which Brust does what he does here, but it’s not a story I loved. Or rather, there were no characters I was able to love (except, perhaps, Jim). My re-reads are like friends I get to visit, comforting and inviting and great company. Agyar is a book to appreciate, and it’s a great introduction to Brust, but I wouldn’t say it’s a comforting read.

15 thoughts on “Agyar by Steven Brust”