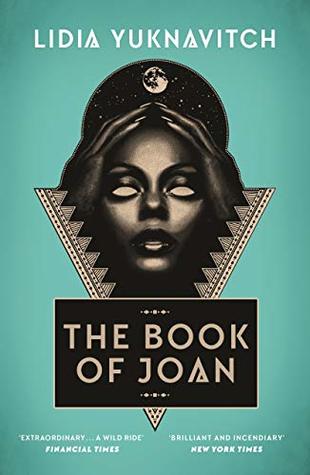 This was nothing like I expected a scifi retelling of the story of Joan of Arc to be.

Let’s start with Christine de Pizan and Jean de Meun, because I like history and therefore so shall you: *deep breath in* In the 14th Century Jean de Meun wrote part of the whopping 21,780-line allegorical poem the Roman de la Rose begun by Guillaume de Lorris in the 13th Century. It became a European bestseller about courtly love and chivalry, with the Rose of the title being both the name of a lady in the poem and a reference to … ahem … femaleness in general. De Meun’s portions of the poem are decidedly misogynistic. His contemporary Christine de Pizan took exception to de Meun’s attitude towards women in the poem and countered with her own work the Epistre au dieu d’Amours (and a whole load more), before entering into a debate by letter with several influential male scholars and with de Meun himself. She is seen as the first professional female author in France. Her last work before her death (and before Joan’s too) was about Joan of Arc.

Yuknavitch gives the name Christine Pizan to her heroine aboard the space platform CIEL. This Christine is also a writer of sorts: she is a talented skin grafter (in this future the people of CIEL use electrocautery to burn texts into their skin, adding skin flaps and flounces to their bodies so that they can add more and more text, like some bizarre evolution of the art and practice of tattooing). The leader aboard CIEL is Jean de Men/John of Men, a self-help guru become celebrity become dictator. And to complete the set we have Joan of Dirt down on the dying planet Earth. Then there is Christine’s co-conspirator Trinculo, acting very much the part of the Shakespearean jester – fondly shouting “medieval obscenities and slurs” throughout – just to muddy the waters of allusion further; along with plenty of parallels and mirrorings of Greek mythology and Biblical stories, and probably a whole ton of other stuff I didn’t see. And yet it all works. It makes for an odd reading experience, which I’ll go into in a moment, but Yuknavitch uses these multi-coloured strands to braid a powerful, often angry, new myth about humanity’s future relationship with Earth.

It’s questionable whether the people aboard CIEL are really human anymore. Skin has become a translucent white, no one has hair and all sexual organs have become vestigial. Clothes are a thing of the past (bereft of sexual indicators and unable to procreate, what use are clothes?), now people are swathed in great pleats and constructions of delicately, intricately scarred skin, like layers and layers of lace. All of it text. People have become walking volumes of poetry, and Christine plans to inscribe her own body with the story of Joan of Dirt as a last act of protest against CIEL’s dictator. Below, on Earth, Joan and her comrade Leone perform their own small acts of war against CIEL, attacking the supply lines that the platform uses to leech the last resources from the dying planet. Occasionally they encounter sickening children, but otherwise the Earth is a vast, muddy, scarred landscape, (Ooo, I’ve just had a thought: the scarred bodies of the people aboard CIEL mimic the scarred body of the planet – both barren, marked now only by histories – that’s a satisfying parallel, isn’t it?). And yet, Joan and Leone shelter in cave systems where they find

” … a biodiversity so rich and secret it was nearly its own world. A jungle, a river, a lake; countless old and new species of plant and animal life; even some things in between that Joan was still studying. Fields of algae as large as foothills. Stalagmites as tall as old-grown redwoods. A whole verdant underworld defying the decay of the world above it.”

I found it jarring to move between these two stories. Christine’s world is both alienated and alienating: cold, sterile, white and peopled by an unrecognisable humanity isolated even from one another. In contrast, Joan’s world (our world) is earthy, smelly and, yes, badly damaged, but still recognisable, still beautiful. The Christine chapters were difficult to read also because … (I’m struggling for words here) … the writing feels theoretical, a little dry, or rather, removed. While the Joan chapters were far easier to slip into, bedded as they are in both a familiar myth-history (the story of Joan of Arc seems to sit between history and myth, something I think Yuknavitch is making good use of), and in a much more solid and recognisable world. The oddness I mentioned above came mostly from transitioning between the two types of language the author is using.

But it is a book about stories. How we use them. How they shape us. How we carry them around with us. And in this way the contrast between Christine’s and Joan’s sections made a lot of sense. Christine uses the story of Joan as an act of rebellion, to say things she cannot say aloud in her prohibitive world. And yes, that act of rebellion is fairly effective, but it is nowhere near as powerful as the real Joan. The physical reality of Joan and the incredible link she has not to God here, but to the Earth, is more important than any story told about her. And I feel like Yuknavitch is asking us to realise that the physical reality of the planet and what we’re doing to it is more important than any of the stories that we tell.

There are a lot of contradictory ideas here though. For example, the book seems to argue that love is the thing that makes humanity worthy of attention, something more than just another life form. On the other hand, it also emphatically argues that we are just another life form, no more or less than the dirt, trees and creatures around us and all made from the same substance. That our prioritising ourselves above all other life (seeing ourselves as overseers rather than members of Earth) is the reason for our home’s demise. Then again, it was Joan’s act of selfless compassion for the planet that destroyed it … Seriously, I don’t know if Yuknavitch is perhaps trying to open up this discussion within her readers, to provoke thought, or if she’s just throwing ideas around like confetti because they’re in her head, so why not in ours too?

So yeah, this is definitely a book of ideas rather than a science fiction novel (as in the science isn’t really as important as the ideas it’s being used to expound). I did enjoy some of the science-ish bits nonetheless. The caves rioting with life because all the larger predators were out of the picture was very cool; and people being turned into stuff to rejuvenate the Earth, becoming trees and water and blooms of new life was just awesome. I struggled with it only being the year 2049, I don’t believe that in thirty years we’re all going to lose our hair and become near genderless, that seems like a big evolutionary leap for us to be taking (it was still a satisfyingly creepy vision of our future selves); although I’m pretty sure that we will have damaged our planet irreparably in the same amount of time.

Things I haven’t mentioned: the female power conversation, because I didn’t feel terribly clear on what was being said. The queer love conversation, because there’s a much, much better discussion of that over at Electric Lit and anything I could have said would have been grabbed straight from there (and that’s plagiarism, folks!). The multiple mutilations that go on aboard CIEL, because trigger warning!! And finally, the sex stuff, because, honestly, all that just makes me uncomfortable, (a cup of prude tea? Why, thank you). I’m not terribly interested in reading about it anyway, but I was even more confused that pantomiming masturbation and sexual acts were used as a method of rebellion, and that the humans who had no equipment for it were the most obsessed with sex … like, the desire didn’t wither away along with their reproductive organs. I didn’t get it.

Wow. I’ve gone on a bit, haven’t I? Let’s conclude. This is a book that’s difficult to place on my reading map. It made me think of The Female Man by Joanna Russ more than anything else, and my reaction to it has been similar in that I don’t feel I’m smart enough to really understand everything the author is trying to say. It feels experimental, it’s definitely thought-provoking, and it is very, very angry in places, (hmmm, I didn’t talk about that either, did I? Never mind). I wonder what will happen to it in the future? Will it survive as a classic and get studied and picked apart in classrooms across the world? Or will it be forgotten?

“And yet earth was reborn. It was not a miracle that life was destroyed and then re-emerged. It was the raging stubbornness of living organisms that simply would not give in.”

11 thoughts on “The Book of Joan by Lidia Yuknavitch”