OK, this wasn’t quite as spooky as a Halloween read should be, but I’m still counting it because there were ghosts. 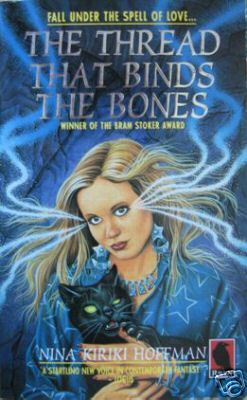 Jo Walton only had to write one sentence about the type of magic Hoffman writes to make me hunt down this first Chapel Hollow book: “If you’re asking how it works then you’re reading it wrong”. Because that’s the kind of magic I want to read about. (And some of Walton’s thoughts on Hoffman can be found here at tor.com if you’d like to be similarly enthused).

It’s great magic: instinctive and intuitional and not bound by a lot of rules requiring special chants and sigils and ingredients. Not that magic with ingredients isn’t also pretty cool, but it’s all about how the magic works in the world of the book, and that kind of magic wouldn’t have worked here. Reading The Thread That Binds the Bones was like sinking into a slightly better version of the real world. Yes, dreadful things still occur, but magic is there as a method of redressing the balance. This book was first published the year I turned thirteen and, man, do I wish my best friend and I had been able to read it back then. It was written for us as we were then.

I don’t know if I really want to talk about the plot at all. I’m not sure it would make a lot of sense if I wrote it all out. Things happen, slowly at first and then much quicker, and it all feels pretty organic and you get swept along. By the end, you look back and realise that you’ve just read a heap of crazy stuff that made a lovely kind of sense while you were reading. I’ve mentioned before that I am left with distinct visual impressions after I’ve read something – well, The Thread left me with a kaleidoscope-view of scenes and characters, rainbow-hued with purple sparkles.

What I think Hoffman is interested in is power dynamics and how people turn out when they have been either a victim or victimizer. She’s not afraid to talk about abuse and rape and yet she doesn’t write about these things in a particularly triggering kind of way. She focuses not on the abuse, but on the consequences of it for both parties and how to heal or move on or grow beyond. There is, perhaps, a naivety there that wasn’t obvious while I was reading this, but that I feel must have been there when I think back on what I’ve read. I am thinking very specifically about Maggie here and her relationships with both Carroll and Eddie. Eddie seems completely let off the hook because he too was a victim of the Bolte family, but the point is made later with Maggie that just because you’ve been a victim does not mean it’s OK to dish out the treatment that you yourself received.

Anyway, that’s making it sound like it’s a really heavy book, and it’s not at all. It’s got a wonderful community of both mundane and magical characters whose lives have been intertwined for centuries and it deals with some of the complications of such entanglement. This is going to sound a bit weird, but go with me on this: while I was reading it I imagined that the town of Arcadia was like Stars Hollow in Gilmore Girls and the house out at Chapel Hollow was like Richard and Emily’s house, only bigger and more magical.

The house is awesome. I’m not going to say any more than that, but, yeah, seriously cool. And the Powers and Presences are awesome, particularly Peregrine. I also loved all the Family names: Bolte, Locke, Seale and Keye (I feel like there’s a theme maybe?) But the clothes? Ouch! It’s possibly the only detail that really dates the book, and while I would have loved Laura’s wardrobe as a teenager and probably would have spent quite some time drawing pictures of her every outfit, now I just wanted to take all her accessories away from her.

I have a very small list of authors I would quite like to meet. Other than Jo Walton herself, Connie Willis and Julie Czerneda are the only other two people on it, but I think Nina Kiriki Hoffman may actually just have gone on the list. It’s a totally subconscious process, so I’ll have to go check …

Finally, it has only just occurred to me that this was urban fantasy, although it didn’t follow the rules in the way you’d expect. There were no leather-clad loners keeping the mundane world from discovering the magical world. In fact, the mundane world was painfully aware of the magical world’s existence at the beginning of the book and it was much more a case of those two worlds achieving some sort of peace together. And whereas urban fantasy normally feels like it would be powered by a rock or grunge soundtrack, Hoffman’s book is definitely powered by folk music – there’s some melancholy notes in there, but also that warm, rich music that creates a sense of belonging and has everyone tapping a foot.

I don’t know if I’ve made it clear that I really enjoyed reading The Thread That Binds the Bones, but if it needs to be stated, then I did. A lot. And I know I have another book by Hoffman somewhere which I’m looking forward to digging out and reading, because I want more of the world of Chapel Hollow.

I’ll take anything else she cares to write too.