I enjoy that moment, when you start to read a little more by an author, and get a feel for the characteristics of their writing or the themes that preoccupy them. Having only read Jackson’s We Have Always Lived in the Castle previous to this (my thoughts here if you’re interested) I didn’t know quite what to expect going in, although I had hopes. On finishing The Haunting of Hill House I desperately want to go scoop up everything Jackson has written and anything that has been written about her and greedily gobble it all down, because I really like her writing style, her characters and her preoccupations. 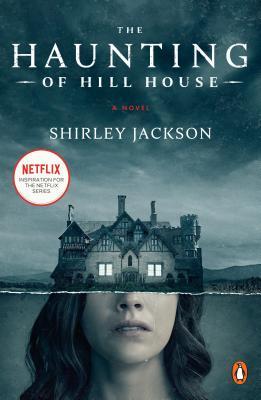 I spent a lot of time with my Nana growing up and, as we both loved to read, a lot of that time was taken up with talking about stories. We had a small blue hardback book of short stories in particular that we would read from and then discuss at the kitchen table early on Sunday mornings. That book was my favourite because most of the stories seemed quite ambiguous and from one week to the next we could make up whole new reinterpretations of what they meant. I enjoyed having to puzzle over word choices and imagery as though the various authors had set conundrums for us, their readers. And I think that’s one of the attractions of Jackson’s writing for me. Her style is economical and clear (the book is only 246 pages long) and yet there is always this underlying ambiguity. Specifically, there is a disparity between what her protagonists think is happening and what is actually going on. Both Merricat in We Have Always Lived in the Castle and Eleanor in The Haunting of Hill House have rich interior lives that colour their perceptions and, because we see through their eyes, ours too.

Eleanor Vance is, for me at least, an incredibly sympathetic character. A woman who has spent her life so far nursing an ailing (now dead) mother and being belittled by her sister and brother-in-law, she steals/borrows the family car and runs away to Hill House at the invitation of Doctor Montague, who wants to study the phenomena of the haunted house scientifically with the aid of a few assistants who are open to “psychic manifestation”. Throughout the book she is repeatedly infantilized by others because, despite being 32 years of age, she has led such a sheltered existence up to now that “she could not remember ever being truly happy in her adult life”. She spends much of the book struggling with the concept of being an individual, capable of her own decisions, and lives quite firmly in her own interior world. She is an incredibly lonely character who moves constantly between states of not-quite-smothered-rage and bubbling excitement, never quite understanding what is going on within the small group she finds herself in, having no real experience of people or relationships.

The rest of Doctor Montague’s research group are made up by Theodora, a capricious, free-spirited sort; the liar, thief and member of the family that owns Hill House, Luke Sanderson; and Doctor Montague himself. None of them are quite as interesting as Eleanor, but they are all distinct characters with their own baggage, and the group dynamics over the course of the story are as fascinating as the paranormal events which have brought them together. In the end, Hill House agrees with me on this though: Eleanor is the most desirable of the bunch.

I almost don’t want to talk about the house itself for fear of inadvertently spoiling something for the would-be reader. I’ll tread as carefully as I can. Hill House is a massive, dark presence throughout the book. Once we’ve glimpsed it for the first time with Eleanor, and thought “Hill House is vile, it is diseased; get away from here at once” at the end of chapter one, it is with us for the rest of the book, deeply oppressive and insistent. It is a place characterised by claustrophobia and tension, a house standing apart and alone and always watchful. Something I loved in We Have Always Lived in the Castle that I didn’t expect to find again in Jackson’s writing is her habit of giving life and personality to the inanimate. It charmed me so completely I think because it’s such a human quirk, to give personality to our things, to imagine that our shoes don’t feel like dancing today, or that the kettle is in a grump because it hasn’t had a holiday. And here Jackson uses it to spook the heck out of her readers. Yes, the fronts of houses do look like faces, but this one is a malevolent face, defined by ill-will, and hardly anything more is needed to convince us and the little party who have come to stay that Bad Things will happen in Hill House.

In fact, the history of the house, as recounted by Doctor Montague, isn’t particularly spectacular (it’s not built on an Indian burial ground, there haven’t been any murders within its grounds and no nuns were bricked into the walls alive during its construction). Even the scary bits that we and the characters witness are typified by restraint, Jackson doesn’t overegg her scenes and there’s a lovely questionable quality to it all – is it the house? Or is it a shared delusion? Or is it in some way caused by one or more members of the group? She layers unsettling details with an artist’s skill, doesn’t attempt to explain everything witnessed, and leaves it all to brew in her characters’ subconscious and in ours.

It’s kind of perfect that my last read for Spooktastic Reads was the scariest one, (it is so very nearly Halloween, after all). It had so many little details that I loved – not just the creepy stuff, none of which I am going to give away – like the bizarrely punctual, deadpan Mrs Dudley (such a great cook?!), and the ridiculous latecomers Mrs Montague and Arthur; or all of Eleanor’s lies and daydreams, and the peculiar décor of Hill House complete with weird marble statues and plush-but-uncomfortable chairs. I loved how the house dominated the book, a character in itself, almost tragic, almost worthy of sympathy; and I loved the ending, the whole last chapter about which, again, I can say nothing.

Shirley Jackson has only in the last ten years or so become the subject of renewed interest, which means right now there’s quite a lot of interesting articles about her and her work kicking around the webiverse. She sounds like a fascinating woman from the little I’ve read so far, and I’m intending to buy Ruth Franklin’s biography A Rather Haunted Life to learn more. Because of this new fan-girl crush however, I feel like I’ve done a worse job than normal of saying anything coherent or useful about The Haunting of Hill House, so if you want to read some far more analytical and thorough (and spoiler-ish) thoughts on the book then I recommend the following three articles linked below, all of which I enjoyed:

Alison Flood’s 2018 article for the Guardian

And Brit Mandelo’s article for tor.com, which was originally published in December 2016 to mark what would have been Jackson’s 100th birthday

” ‘And so the old house has just been sitting here,’ Luke put out a tentative finger and touched the marble cupid gingerly. ‘Nothing in it touched, nothing used, nothing here wanted by anyone any more, just sitting here thinking.’

11 thoughts on “The Haunting of Hill House by Shirley Jackson”