Changing Vision is book two in Czerneda’s Web Shifters trilogy. Book one was Beholder’s Eye, which I first read for SciFi Month last year – thoughts here if you’re interested – which I find a very pleasing; there’s a symmetry in that. Nothing I have to say here is going to overtly spoil the first story for you, but if you’re thinking of reading them my advice would be to read these books in order. A lot of what happens in Changing Vision is directly related to events and characters from Beholder’s Eye and you really don’t want to miss any of it. 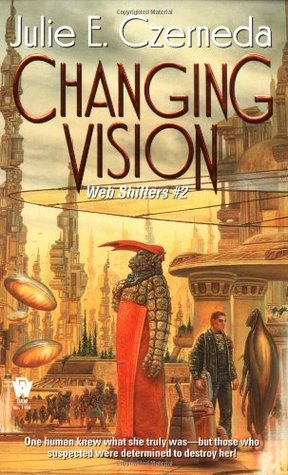 I loved Beholder’s Eye. In it we met 500-years-young shape-shifting alien Esen-alit-Quar and got to see a Star-Trek-esque universe of fabulous variety from her unique (and adorable) perspective. We also met Paul Ragem, a Commonwealth alien communication specialist, and Esen’s first true friend outside of her small Web-family. A lot of shit went down in that first book: murder, mystery, family secrets, an unstoppable force tearing its way through the universe killing everything in its path. And Esen and Paul did an awesome job of handling it all, together. So my only real worry at the end of Beholder’s Eye was that Paul wouldn’t be around for the rest of this trilogy, being as Esen is so long lived in comparison. Thankfully, while fifty years has certainly aged our ephemeral Human somewhat, he’s nowhere near done with life yet (I can’t find it now I want it, but there was mention of the Human lifespan being quite a bit longer than what we have now to explain why Paul is such a bad-ass septuagenarian in this story).

Changing Vision picks up the story of Esen and Paul – now business partners running the Cameron and Ki Freight Company and living under assumed identities – in a backwater corner of space. Right off the bat I loved that their friendship had still not gone heart shaped, and as the story unfolded I loved too that it had become appreciably richer after fifty years and was still grounded in a shared curiosity about and compassion for life in all its forms. As I settled into reading this on the sofa one evening I actually felt that weird happy-sad feeling you get when you finally spend time with someone you’ve not seen for ages and realise you’ve just picked right up where you left off.

So this won’t be objective at all. Ha!

If anything, I found this episode in the adventures of Esen and Paul even more exciting than the first one: A series of increasingly suspicious coincidences, first contact with a race Esen has no knowledge of, three characters with troubling (to say the least) obsessions, a fascinating communication problem between two sentient species, more threats to Paul and Esen’s safety than you can shake a stick at, and some of the political, social and emotional ramifications of the events in Beholder’s Eye thrown in for good measure, made this the least relaxing read of the year. I spent a fair amount of time gasping, shouting at bad guys and chewing my fingernails as our heroic duo bounced out of one scrape and into another with increasing rapidity. But that was only when I wasn’t feeling all the feelings about the guilt and loss that haunts a number of characters in the story.

For Esen fifty years is nowhere near enough time to come to terms with the losses she sustained in Beholder’s Eye and while she keeps making the point that she is now the eldest of her Web, it’s interesting that her real vulnerability is that she is still the youngest. Just because she is considerably older than everyone she knows doesn’t mean she has yet reached maturity and a couple of the most touching moments here were when Paul comforted her as a parent would a child, underlining how much he has become family for her.

Then there is what happened to Garson’s World, and the guilt assumed by the Tly; Esen’s friendship with Joel Largas; Lefebvre’s loss; and Esen’s Ersh memories of the Fenedens and the time before the Web. How each species deals with loss and guilt makes for a fascinating undertow even as the story gathers momentum. The impact that Esen and her kind have had on the populated areas of space is far-reaching, and while she has Paul, Esen is still alone as the representative of her species – with all that that could entail if she were discovered.

Fortunately, she is still her impulsive, earnest, well-intentioned self, so there were as many laughs as gasps (and supressed sobs). There’s a lot of fun to be had with her Lishcyn form (as pictured in the cover art by Luis Royo) in which Es is beautifully clumsy – particularly in the Circle Club restaurant, a scene that had me howling with laughter – and has to give much more thought to the condition of her five stomachs and, ahem, associated functions. Not to mention her inclination to decorate herself with leaves when upset. As an unfamiliar, but stunningly beautiful Feneden Es is a lot more restrained, but there is still a laugh out loud moment when she finally has something to eat in that form, much to the horror or her attendant medic. Then there’s her irrepressible mischievousness even in the face of real danger: stuck on an enemy ship and trying to find the captured Paul, she takes advantage of the Tly crew’s superstitious nature by posing as the ghost of a blood-encrusted child to move about unchallenged; and in trying to find a parking/hiding place for a herd of Ganthor and their armoured vehicle she reframes their recent attack of the Iftsen’s art gallery as performance art. And gets away with it.

There’s another wonderful array of alien species for us to meet and muse over in this book, (I’d love to know what Czerneda’s notes for some of them must have looked like). I was delighted to see Esen’s Quebit self again, if only briefly (I identify with these little obsessive fixer-organisers) and the fabulously smelly, noisy Ganthor. I was also pleased to make the acquaintance of the party loving Iftsen, the attractive, nervous Feneden and a young Erkickian hustler. And I just loved Es as the Lishcyn Esolesy Ki. Czerneda’s got the gift for making all of these various beings both fascinating and relatable in some way, but when Esen becomes them they often turn out to be terribly adorable. Which has a lot to do with Esen’s own affectionate and cheeky nature shining through her various disguises, I think. Certainly, I am as much in love with Esen as a Lishcyn as I was with her in her Ket and Lanivarian forms in Beholder’s Eye. What I picked up this time round that I perhaps missed in that first book was the interesting way in which each different form impacts on her personality just a little – she is more relaxed or more aggressive, more able to concentrate or more flighty depending on some of the evolutionary aspects of her chosen species. I thought this was pretty darn cool, now that I’ve noticed it.

Changing Vision is a tightly plotted adventure and a festival of fun rolled into one. It is also a celebration of friendship, something that I applaud long and loud, (because, sure, romances are great and they have their place, but how often do you read about a friendship that isn’t just a reason for some sort of heroic effort on the part of the protagonist?). There’s a lot to be said for optimism, heart and humour, so if you feel the need for some, or you already love Lois McMaster Bujold’s or Becky Chambers’ books, or Star Trek, or the Mass Effect games, then I heartily recommend you give these books a go.