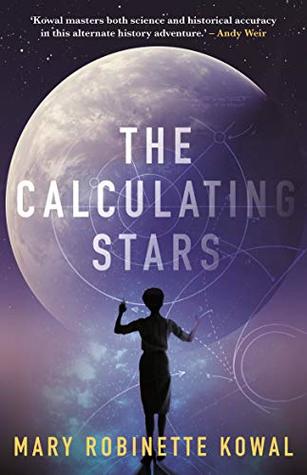 I love reading about people who can do a thing I find incomprehensible really well. One of the best things about reading is that you get to imagine what it must be like to love something or be good at something that you have no experience of – it makes the world feel wider and more interesting.

“There are times when numbers paint pictures in my head.”

I can’t do maths. I don’t understand anything more than basic addition, subtraction and multiplication. I still get in a sweat when I have to work out people’s change at work. So I love reading about people who get numbers. Not just the basics, but all that stuff that underlies the workings of the world. And it blows my mind that being able to do that kind of maths means that you can work out things like how to get a shuttle into orbit, or how the planets move in relation to one another. It’s a mark of Kowal’s skill as a writer that she can make mathematics sound beautiful and glorious and relevant when she also states in her acknowledgements that she doesn’t understand any of the maths she has Elma do. Throughout the book I was convinced that she was writing about something she comprehended, and I was deeply impressed when I discovered she didn’t.

So, this is the absorbing alt-history tale of one woman’s role in an accelerated space race that is jump-started by a cataclysmic meteorite impact in early 1950s America. And in telling Elma York’s story, Kowal tells the story of a great number of other men and women who really did a lot of the things she has her characters do. The first thing to love about this book (after the maths, of course) is that none of her characters are placeholders, they all feel quite real and imperfect and sympathetic. I love that Kowal deals with so many issues in this book too: disability, racism, sexism and mental health issues are all explored, as opinions that were typical of the 1950s are challenged head on in this alternative world in which humanity is facing (when it’s not in denial) its own extinction. It certainly makes for an emotional read. When I wasn’t cheering Elma on for sticking it to Parker (you absolute and utter areshole, you) and any other man who tried to keep our girl grounded, I was sobbing in frustration at the sly, small ways, and the horrendously massive ways, in which difference of any kind was pushed out of view. By the end of the book I was an exhausted, soggy mess.

The second thing to love (unless you hate this kind of thing) is that this book is the how-she-got-there companion to a short story by Kowal called The Lady Astronaut of Mars which you can read for free online at tor.com, (it’s a great story, even if you’re not interested in reading The Calculating Stars, but I warn you now, it’s a killer), which is awesome because we get to meet a less snarky Elma at the start of her career and really appreciate how far she’s had to come. But which is perhaps simultaneously not so great because now you know that no matter the obstacle, Elma will become a Lady Astronaut because she already is The Lady Astronaut.

And then the things to love become a stream of delightful details, all adding up to an incredible reading experience: all of the characters: Myrtle and Eugene; Helen, Basira, Pearl, Nicole, Imogene, Sabiha and Ida; Aunt Esther and Hershel; even Betty. Ray Bradbury’s Martian Chronicles being read by a couple of characters was just awesome. The use of phrases like “bless your heart” and “isn’t that nice” to mean the exact opposite. The term ‘computer’ always referring to a person who computes and never to a machine, and the IBM being a not-terribly-reliable punch-card-fed data-processing machine. Elma’s love of both flying and the Multi-Axis Space-Test Inertia-Facility (just the idea of which make me want to throw up). Mr Wizard. And the stars at the end, after everything.

There was one small problem for me with this book that has so many great things to say and some excellent scenes and a ton of good characters that were easy to like or hate where appropriate, and it was this: the sex. If you’ve read anything else on my blog, you’ll have picked up that I am absolutely not a fan of sex scenes, so it’ll be no surprise to anyone that I didn’t like the sex scenes here. Sure, they were pretty mild and I doubt many people would be offended by them, but I had no need for them, and all the talk of ‘rocket launches’ just made me cringe.

And there was one other thing that I was ever so slightly less than OK with. I want to be clear right now that it was fantastic to read about an incredibly talented woman achieving amazing things without her husband having to step in and save her or pull some strings without her knowing. And Elma and Nathaniel’s relationship is one of the most heart-warming, solid and unquestionable aspects of the story (even with the … *small shudder* … sex). I too am lucky enough to have a husband who is remarkably tolerant and who listens to me when I have something to say, (he also does cute things like hide chocolate in the house for when I need it, or animate my cuddly toy panda to make me laugh when I’m being pissy). He’s a great guy. And, like Elma, I also have some mental health issues that impinge on my ability to function in some circumstances (and I felt a bit sweaty just typing that out, so we’ll move swiftly on). But my husband, Thumbs, is not always there for me, and doesn’t always understand, and sometimes gets downright irritated with me because … he’s human and he has his own life to live and I am not the centre of the universe (no matter my personal convictions on that subject). So, while Elma and Nathaniel gave me all the feels and I can’t wait to catch up with them in The Fated Sky, they remain most definitely fictitious for me.

Finally, there were two things I’d have liked more of: One, I would have liked just a little more information about what was going on in the rest of the world. Food riots were briefly mentioned, and there was a reference to the former Soviet Union but no follow up on when that happened, and I think Elma talks a couple of times about how cloud cover has become a permanent thing since the strike. These details were great, as were the news headlines at the beginnings of the chapters, but they weren’t quite enough for me to picture this world as clearly as I’d have liked (because I do love to know how the world is going to go to hell). And two, I wanted more of the life-in-space problem-solving stuff, although I’m thinking that may be a bigger thing in the next book. Because we are not at all made for space, so how, starting with 1950s technology and knowledge are we going to fix it so we can live there when our planet becomes too hot to handle? I want details. I want science, or near-science, or convincing pretend-science. Tell me what it’s going to look like, our living on the Moon. Pretty please.

I am and will be recommending this to everyone I meet. I have already had a brilliant discussion with one of our regular customers about it and off the back of that he lent me his childhood copy of Manned Spacecraft by Kenneth Gatland which was awesome because it was a bit like being handed a piece of Elma’s world, if that makes sense. And this book has given me a great list of follow-on reading (thank you, Mary Robinette Kowal). In my non-fiction life I’m currently reading The Innovators: How a Group of Inventors, Hackers, Geniuses and Geeks Created the Digital Revolution by Walter Isaacson, or at least I will be again when this stupid reading slump I’m in has passed, but when I’m done with that I’m definitely jumping on Kowal’s recommendations: Hidden Figures by Margot Lee Shetterly (book, then film) and Rise of the Rocket Girls by Nathalia Holt and The Glass Universe by Dava Sobel. And that’s pretty satisfying.

10 thoughts on “The Calculating Stars by Mary Robinette Kowal”