My next Vintage SciFi Month offering was … interesting. Up until now I have loved the nature-takes-back-the-world trope in all its guises, so I was looking forward to reading The Drowned World, but while I enjoyed aspects of this novel, I found both the lack of plot and the lack of characterization difficult. 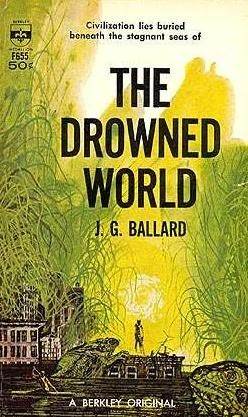 Both lacks seem intentional, however. After a “succession of gigantic geophysical upheavals which had transformed the Earth’s climate” the world is now a waterlogged hothouse and London, where Ballard centres his novel, is a sweltering maze of tropical lagoons predominantly occupied by giant mosquitoes, iguanas and water snakes, and incredible prehistoric plant-life. In an environment becoming less and less human-friendly, naturally such things as plot fall by the wayside. The main drive of the story seems to be simply that Robert Kerans, over whose shoulder we view this new world, accept the inevitable regression that is occurring both around and within him.

Which I guess is why the lack of characterization is equally appropriate. While we meet a handful of characters within these pages – most notably Beatrice, Doctor Bodkin, Hardman, Strangman and Colonel Riggs – they aren’t people we get to know well. When the world has literally gone to hell in a handcart and it’s so hot that just putting on a shirt is exhausting, getting to know someone hardly seems worth it, perhaps. Certainly, when life is stripped back to survival, individuality seems less important.

“However, I am convinced that as we move back through geophysical time so we re-enter the amnionic corridor and move back through spinal and archaeopsychic time, recollecting in our unconscious minds the landscapes of each epoch, each with a distinct geological terrain, its own unique flora and fauna, as recognisable to anyone else as they would be to a traveller in a Wellsian time machine.”

De-evolution and regression are the name of the game. As the world around them returns to a Triassic configuration, Doctor Bodkin theorizes that people will travel back down their genetic memories. Humanity’s recently learned social and domestic behaviours, relationships and ambitions will fall away and there will be “a total reorientation of the personality”. About half of the soldiers attached to the testing station in which biologists Kerans and Bodkin work are experiencing identical dreams – a dream we don’t get to ‘see’ until Kerans also experiences it – in which a giant sun pulses like a heartbeat above a nightmare lagoon writhing with life. The primordial soup, perhaps, with everything that makes us what we are broken back down into basic building blocks. The end, in effect.

So, what use is a plot, and what use individuals to identify with, when the world is coming to an end? The only real attempt Ballard makes at plot is to float out the freebooter Strangman and his crew (and two thousand attendant alligators?! Show-off!), but even this violent, crazed group don’t pose any real threat to our listless main characters. If anything, they seem to be there only to demonstrate the other option: let the veneer of civilization slip from your shoulders and go out bloodied.

Perhaps you’re now wondering why you should bother reading The Drowned World if it’s such a downer? Because, for all that the message is bleak, the writing, the imagery, is beautiful. Ballard was inspired by his childhood experiences in an internment camp in Shanghai when he imagined his flooded future world and perhaps that personal experience is what makes this setting so vividly realized. All I can say is that I loved it. The sun is dazzlingly, menacingly beautiful throughout; the buildings that still rise out of the lagoons swathed in creepers, moss and mould have the appeal of ancient ruins; and the gymnosperms and calamites that tower over everywhere else are otherworldly. Ballard’s future is alive with life, but near alien. A future that cannot be controlled or contained, only submitted to.

There is also a kind of mythic quality to this book that I can’t quite think how to explain. Ballard references Adam and Eve and the Garden of Eden, and Neptune and Minerva overtly, but that’s not what I mean. It’s more that some of the images feel familiar: Hardman’s leave-taking, seemingly walking directly into the sun; Kerans being crowned and tied to a throne by Strangman and his men; Strangman himself, weirdly pale when the sun has burnt everyone brown; Kerans finding Hardman again at the temple; they all feel like afterimages somewhere in the back of my brain. Or echoes, maybe.

To conclude: don’t read this if you’re looking for an exciting, pacey adventure or big, fleshed-out characters. Do read it if you’re interested in taking an odd, meditative journey South; if you enjoy immersive, descriptive language; or if you understand the need to step back from the world in order to figure out how you feel about a thing.