I am getting a bit of a kick out of reading short stories right now, so here’s another collection I explored for Vintage SciFi Month. I’ve found that reading a selection of stories by one author gives me a nice dip-in introduction to their style and range. As a result of reading Delany’s Driftglass a couple of weeks ago I now want to read everything else he’s written (I’m going to qualify that, being as I’ve been reading up on him: everything else he’s written within the SFF genre; not sure I’d care too much for the erotic stuff he went on to write later). And this eight story Aldiss taster hasn’t put me off reading any more of his work. Maybe I’m not quite as in love with his writing style as I am with Delany’s, but I like his ideas. 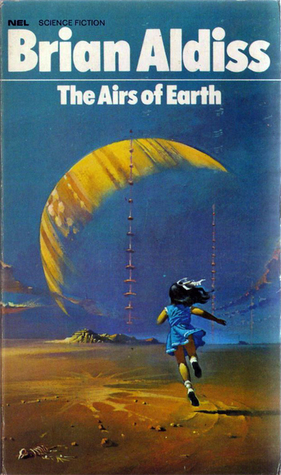 Only two out of these eight stories left me cold, which were the first two in the collection: “A Kind of Artistry” didn’t spend enough time with all the fascinating bits – parthenogenic slaves, furry people and antlered people, the entity known as the Cliff – instead focusing on a toxic relationship that I didn’t care for. And “How To Be a Soldier” just didn’t have enough meat on its bones, although I’m usually interested in stories about what we’ll do to make a soldiers bigger, faster, stronger.

Then again, I’m not normally too fond of political narratives, but “Basis for Negotiation” had me hooked. Set in 1971 at the outbreak of World War 3, this was a tense, engaging look at the dynamics of power when played out big. And sooo British. Later in the collection “The International Smile” toys with some of the same ideas, only Aldiss plays it for laughs and it reads for all the world like an episode of Yes, Minister and had me howling.

“Shards” took two read-throughs to appreciate fully. The first time to get what’s happening to Double-A and Garm, and the second time to really enjoy all the wordplay used to lead us through their metamorphosis. If any story in The Airs of Earth captures the spirit of the collection it’s this one – Aldiss, in all of these stories, is having fun, throwing ideas around like confetti.

My favourite story however, is “The Game of God”. It’s probably the most typical piece of science fiction here, but I like what I like. An ecological survey team arrives on the as yet unexplored Kakakakaxo to check its suitability for colonization. All they know about the planet is that nineteen years earlier a man known as Daddy Dangerfield crash landed on it and became a god to the indigenous reptilian pygmies. The team hopes to find Dangerfield because his knowledge of the planet and inhabitants will make their job a lot easier. And they do find him, an old, sick man, still apparently worshipped by the “cayman-heads”, but he doesn’t prove all that helpful. I love stories that drop in on alien worlds and I love to piece together information about the planet or an alien race to work out what’s going on, so that’s the main reason why I enjoyed this one so much, I think. Certainly the conclusion is a little bit obvious, but the getting there was so much fun and Barney, Craig and Tim were good company.

“O, Moon of My Delight” (the story depicted by Bruce Pennington’s cover art) is both interesting and odd. Tandy-Two is a planet used as both a sheep-farming paradise and a kind of landing strip for FTL ships. As a result of its landing strip duties, the planet gets wobbled regularly, so time is always changing; an FTL ship may come in of an afternoon, but as a result of this arrival Tandy-Two has been pushed into an early night-time. This whole idea had me very interested, but the story is then a disappointingly human one about a sheep-farming family soon to leave the planet and return to Earth and a tragic occurrence. I wouldn’t have minded so much if more of the characters had been likable, but six-year-old Fay is the only one worth mentioning.

Finally, “Old Hundredth” tells of a far, far future Earth now orbited by Venus and sparsely populated only by the giant animal-people created on Venus and known as the Impure. Dandi is one such creature, a sort of sloth, who rides a sort of rhino called Lass. She has a telepathic link to her blind dolphin Mentor and studies musicolumns. She meets a knife-wielding bear on her travels. At the end of the story she transubstantiates herself into a song. Make of that what you will, it all made perfect sense while I was reading it.

If anything links these stories together it’s the sense of fun that runs through the collection. I’d say Aldiss enjoyed himself immensely writing these and they are entertaining to read. And no matter how far flung the location or the time, Earth is always in the background as the starting point from which travellers have travelled, races have evolved, time has unspooled.

That is to say, I am left with a desire to read something more by Aldiss, but no idea of where to start. These stories are so various – what kind of novels did he write? So tell me, has anyone read any Aldiss? And if so, can you recommend anything?

3 thoughts on “The Airs of Earth by Brian Aldiss”