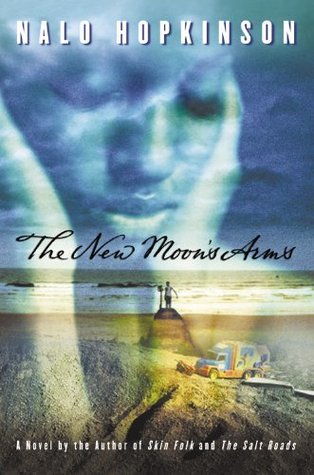 Calamity who carries around her hurts like little fires that need to be kept burning at all times.

She is a massive character. She is brave, strong, funny and irreverent. She is also grumpy, sharp-tongued and deeply flawed. There were two points in the story at which I wasn’t at all sure I still liked her, and yet Hopkinson’s compassionate portrait kept me interested until the very end. And by writing Calamity in all her many shades of grey, the author makes her too real to ignore. If she were just a homophobe, or just a critical mother, she’d be easier to dismiss as a caricature, but she is much more than these things and she has the capacity (thank goodness!) to grow.

Which is just as well because, whether she likes it or not, she is going through the change. Having been a woman not afraid to make it clear what, or who, she wanted, she’s not ready yet to hang up her stilettos or stop making eyes at attractive men. She’s not ready to become a ‘matriarch’, and at the beginning of the book she’s not talking to her daughter for having used that ‘m’ word to describe her. She’s not ready to let go of all the things she has been in order to become something new. And in a lot of ways, this is crux of the story.

With the onset of hot flushes Calamity discovers that she is ‘finding’ again. As a child she could find lost things, a talent with something of a history on the Caribbean islands around where she lives. When her mother disappeared she lost this semi-magical skill, and now, at the beginning of the book, it is back with a vengeance. Found things from her childhood are literally dropping out of the sky (or ceiling when indoors) every time she has a hot flush. And as time passes the found things get bigger. First, it’s just a few toys and books, then it’s an almond tree, then it’s a whole grove of cashew trees.

And she finds a small boy on the beach, washed up after a storm. He’s maybe three years old, speaks an unknown language and has a couple of unusual traits that point towards him being one of the ‘sea people’, a sort of mermaid-selkie hybrid that no one speaks openly about, but everyone more or less believes to exist. Calamity takes the boy in and names him Agway. In becoming a surrogate Mamma for him she perhaps thinks to avoid the other associations people are starting to make about a woman of her age.

Because without every being too heavy handed about it, this book explores the terrors of getting older (Hopkinson quotes Dennis Scott’s poem ‘Uncle Time’ several times in the book), especially for women, who, if not seen sexually, don’t appear to be seen at all, by men or by some of their fellow women. It looks at the loneliness that can threaten when everyone around you has grown up or moved on (or been pushed away). But it also gives a glimpse of possible comforts too. Right at the very end of the book Calamity discovers that her neighbours Mr McKinley and Mrs Soledad are “having a hot affair” and there is surely some hope for her to find in their “big grins” and “the companionable rise and fall of their conversation and their laughter”. We lose and we find our whole lives through.

If I have any criticism it is this: many of the mysteries in the story are not solved. We never really learn the significance of the Granny and the devil-girl tale that gets told, nor do we learn the full implications of the dada-hair lady’s story, although we’re in a better position to guess at the connections between her and Calamity. We learn nothing more about the cutlass after Gene’s phone-call about the blood; and while it is implied that Calamity’s mother was one of the sea-people, that, too, is never really confirmed or explained. Also, while I loved the monk seals conundrum at the Zooquarium, I still felt somewhat frustrated that this wasn’t tied into the sea-people story a bit more securely.

This is both a fun and a funny book to read. Calamity is so thoroughly herself that whether she’s trying to climb a tree or run for a bus, commune successfully with a group of sea-people or talk to just about anyone else, her way of looking at the world, with such sharp-edged humour, had me captivated. I don’t always like her, she has a mean streak a mile wide and her inability to let go of past hurts just keeps on damaging her relationships, which is no fun to read, but the feeling at the end of the novel is that she is not yet done changing, and that can only be a good thing.

“You something else, you know that?” He sounded bemused. “You cuss like a sailor, you have a temper like a crocodile, but you more honest than any judge I know.”

8 thoughts on “The New Moon’s Arms by Nalo Hopkinson”