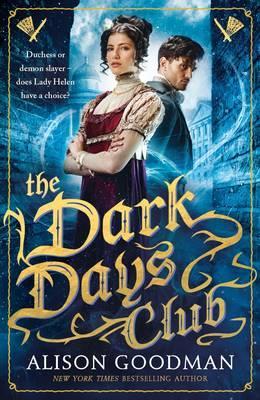 I’ve been meaning to read this for as long as it’s been in the library, so naturally it went on my panic-borrowing pile when we learned that our library was closing for the time being due to the COVID-19 situation. Not that I don’t have plenty to read at home it’s just that panic is catching. Anyway, I picked it up over the weekend because I thought it would be a light and fluffy slice of escapism. And it was, although not quite in the way I expected.

Because for all the familiar ground this book covers – Regency era manners, balls and card parties; a typical love triangle; and the discovery of a paranormal world running parallel to the that of the everyday, and of powers and a destiny to fulfil – the way in which Goodman has written it breathes new life into it all. The Regency setting isn’t just a gloss for an otherwise generic storyline, actual historical events are woven into the plot and the level of detail is deeply satisfying. The love triangle doesn’t play out particularly predictably and the characters are well-written, distinct personalities and products of their time. And the paranormal world is introduced carefully and doesn’t jar against the period details in any way.

Lady Helen Wrexhall has just been presented at court and is experiencing her first London Season. With her parents dead, and her mother rumoured to have been a traitor to the crown, her Uncle and Aunt Pennworth have worked hard as her guardians to give her the best possible start. But now, Helen is learning that she is also a part of a much stranger world than the one she has been trained for, one in which she will be required to fight otherworldly creatures and save souls.

I thoroughly enjoyed the first third of this book, in which nothing much of a supernatural nature happens and we just get to hang out with Helen and learn her world. There are little hints and fleeting suggestions of the darkness to come. A friend of Helen’s suffers a fall from grace, the circumstances of which don’t quite make sense. A lady’s maid goes missing. Stories of the (very real) Ratcliffe Highway murders and the suspected killer’s suicide are making the rounds in drawing rooms and clubs. And by the time we meet our first demonic Deceiver Goodman has created a historical world with breadth, depth and believably murky corners.

We have also gotten to know Lady Helen. She proves to be intelligent and funny, with a strong sense of honour. She isn’t just a modern girl in historical costume, and she enjoys her privileged life of social calls and parties and visits to the drapers and milliners. She reads a little more widely than her fellow females perhaps because she is curious and pragmatically minded. She chafes under the constant surveillance of her Aunt and her Uncle’s lectures on good behaviour and right thinking. Sometimes she feels an almost uncontainable restlessness and often wonders how much she has in common with her lost mother.

And when she learns just how much she has inherited from her mother, she doesn’t dive straight into demon slaying, but instead argues that, as a woman educated only to marry and run a household, she can’t be expected to do such a job no matter how gifted she may be. Most of the book is then taken up with her trying to get her head around the very dangerous new world she has suddenly learned about and her expected role within it. That she takes two thirds of the book deciding what is the right thing to do, says a lot about her character. And we’re there with her, every step of the way. The author gives Helen’s decision all the weight it deserves. She won’t be skipping off to slay Deceivers and back in time for the ball. Instead she will be required to lie and dissimulate, to hunt devious, centuries-old demons in full view of society without society knowing that that is what she does.

“Never before had such expectation been placed upon her, nor such an assumption of competence.”

Then there is the question of marriage. Whether she becomes a Reclaimer (official term for demon slayer, don’t ‘cha know) or not, Helen is still an early nineteenth century woman of means with all the expectations of such a position upon her shoulders. Her darkly handsome and dangerous mentor may be attractive, but he is most definitely off the table (married, wife missing presumed murdered by him); while the much cleaner cut if slightly less pretty prospect definitely appears to be interested, but what motivates that interest? Real regard, competition, or some strange displaced love? There are no easy decisions in this book.

My last thought is about the Deceivers themselves. They’re an awesomely creepy Big Bad with plenty of lore that Goodman has clearly given a lot of thought to. The couple of scenes in which Helen witnesses them ‘skimming’ crowds of people are especially shuddersome. But what is really bothering me is that I’ve seen/read about this kind of creature before and I just can’t think where. There is something very Resident Evil about them, but for all my Googling I can’t find anything that matches this very clear picture in my head. I don’t want to give away anything, so I won’t describe them. I just want it on record that I’ve met them before.

Now, of course, I have another ‘problem’. I thought when I started this that it was a standalone, but the ending (and a quick web search) tells me there’s more. It’s a trilogy. So I have an addition to my Great Series Read Project list when I’m supposed to be working on reducing the darn thing. And I really really need to know how it all ends! Previously to The Dark Days Club I read Goodman’s Eon and Eona duology (about ten years ago, now) and remember enjoying them a lot, which is why this book has been on my radar (albeit for so long). But honestly, I’d forgotten just how good a writer she is. This book fairly swept me along and I warmly recommend you make its acquaintance (if it sounds like your sort of thing). Two enthusiastic thumbs up.

(Finally, I have some Thoughts on trigger warnings:

I know this is a topic that everyone has an opinion about and I have always felt fairly relaxed about the whole subject. And it’s strange that this should be the book to needle me into having Thoughts because it’s not a book that I think many people would find problematic. Helen’s Uncle Pennworth, however, upset me over and above the usual irritation I feel towards characters with his set of opinions. The combination of physical description and situation that arose in this novel ‘triggered’ me. I know why. I understand, in my calm and collected brain, why I was so upset, and still am now. Unfortunately, that part of my brain wasn’t driving at the time.

There’s no way the author, Beta readers, or publishers could have foreseen my reaction. A trigger warning would not have been possible.

I understand the argument that I’ve seen put forward elsewhere that people need to face their triggers in order to move past them. But in their own time and with an element of control on their side, surely? Everybody experiences things differently, and there isn’t one perfect rule. So, I am pro trigger warnings. Knowing that something is coming means that you can choose to go carefully or choose not to face it if you don’t feel equipped to handle it. Fiction is a great place to explore issues because you can step in and out of a book at will. However, it is also a place where we are vulnerable because it all plays out inside out heads and our beautiful, inventive, wily imaginations don’t always stop toying with an idea when we want them to.