I read the first part of this duology back in 2017 and loved it. The black dragon Fionn and the unwittingly powerful mage Meb are both endearingly mischievous and delightful company. Add the unnaturally intelligent sheepdog Díleas to their little party and you’ve got the makings of a merry adventure, which is exactly what Dragon’s Ring was. Dog and Dragon picks up right where the previous book left off and Meb, thinking to save everything she loves, steps out of the world of Tasmarin and into the very different world of Lyonesse. 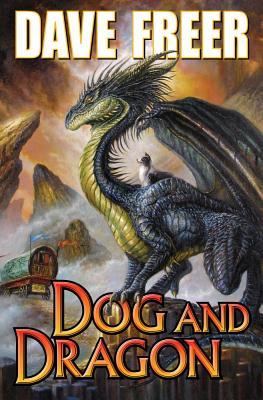 The underlying structure of the worlds through which Fionn and Meb travel is very cool. Freer imagines many worlds, some with benign magic, some with dangerous magic, some with no magic at all. While not open to everyone, there are connecting paths and gateways between these planes, and Fionn, along with a handful of others, was created by the First at the beginnings of the universe to be a planomancer and keep the magical balance. In passing, Fionn refers to the Celtic and Nordic cycles of worlds, the inference being that there are hundreds more cycles, within which there are hundreds of worlds, in which every imaginable permutation of magic is presumably expressed. This is the kind of world-building that makes me grin from ear to ear because you can’t see all the way to the back. It’s beautifully huge and even if the story you’re reading only takes place in a tiny part of the world, you’ve still got that satisfying sense of things in the distance.

My problem now, however, is how to go on without spoiling Dragon’s Ring for those who’ve not yet read it (and you should). I shall do my best, but if it all gets a bit cryptic, not wanting to spoil things is the reason for it.

Meb’s arrival in Lyonesse appears to fulfil a prophecy in that world which puts her in the awkward position of being both loved and loathed at the same time by different groups. Loosely speaking, those with power hate her for the threat she poses, and those with none adore her for being nothing like the lords and ladies they serve. Her fantastic tendency to perform magic when afraid or absorbed continues unabated, and provides a lot of laughs, mostly because of the effect it has on those around her, but it’s funny too, for its peculiar logic: feeling unsafe, for example, she concludes that she needs a weapon, but as swords require a certain amount of skill, she summons an alvar axe of heroic proportions instead. And hides it under the bed.

Her arrival in Lyonesse also awakens many magical creatures that have lain dormant since … for some time. One of my favourite things about the first book was the throngs of alvar (elves, essentially), dvergar (dwarves), merrows (mer-people) and the creatures of smokeless flame (demons) that Fionn and Meb had to deal with, and it was with glee that I met spriggans, piskies, muryans, knockers and grundylows in this volume. And the cameos from Groblek the giant and the Lady Skay made me very happy.

But the hero of the story is, without a shadow of a doubt, Díleas. He steals every scene he’s in, whether wearing red booties to protect his paws, attacking three-headed giants, or riding in a basket carried by a black dragon. Meb is his mistress and since she cannot come to him, he is determined to go to her. There is just something about non-speaking characters that seems to skip past my thinking brain and speak directly to my feeling brain, something about a character (whether animal, human or other), who can only communicate with eyes and body language that makes me love them indiscriminately; (My husband Thumbs occasionally makes puppets of two toy bears we have, and just by tilting their heads and waggling their ears he has me feeling all protective towards them, which is ludicrous, I know). This is the effect Díleas has on me. He tips his head to one side, or stands poised, a paw lifted, sniffing for Meb, and I’m all gooey. He is, in every way, a Good Dog.

Hmmm … have I really told you anything that might make you want to read this book and it’s partner? It’s just been a lot of waffle really. Let’s see if I can salvage this post in any way. What’s to love? Great world-building. The kind of world-building that has enough scope for far more than just two books. Great characters. Fionn, Meb and Díleas are in both books, obviously, but otherwise each volume has a unique cast of deftly drawn characters. In the first book the dvergar artificer Breshy, the tricksy merrow Hrodenynbrys, and Groblek lord of the mountains, among many others, charmed me utterly. In this second book Meb’s young tirewoman Neve, the adorably gloomy spriggan (but no spriggan takes an individual name and they’re all gloomy, so I can’t tell you which one) Jack the knocker (but all knockers go by the name of Jack, so that doesn’t help you much either) and little Owain, son of Earl Alois, had me rooting for them. And great plot. Freer plots twisty-turny storylines and only neatly plaits together all his threads at the end, (I will say that I think Dragon’s Ring beats Dog and Dragon by a hairs breadth in terms of storyline, the second book being ever so slightly disappointing because one big threat to Fionn and Meb seemed to just fizzle away when I was expecting more of a bang).

Should you read these books? Yes, because I don’t think enough people have and they’re great fun. You can thank me later.

(Finally, and of no interest to anyone but me: Having read Dog and Dragon means I have actually finished something on my Great Series Read Project list – Hurrah Harroo!! Achievement unlocked! Cake all round! Woo!)

11 thoughts on “Dog and Dragon by Dave Freer”