Yet again I haven’t quite read what I planned during Wyrd and Wonder month. In part, this is down to these being extraordinary times and my reading moods not being as predictable as they would normally be. Still, we roll with the punches, eh? 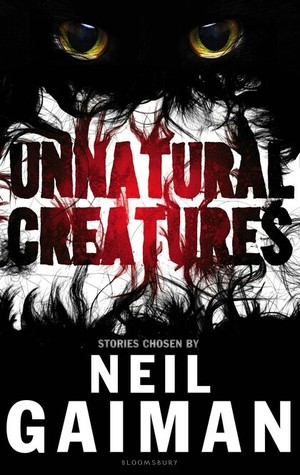 An interesting volume of sixteen short stories, the earliest first published back in 1885 and the most recent in 2013, Unnatural Creatures has been lurking next to the bed for the last two months as my antidote to not being able to get to sleep. Every time I’ve found myself unable to get comfortable or my head’s been buzzing with worry, I’ve grabbed it and been introduced to another strange creature that has given me something else to think about.

While there’s not one story here that I’d say was bad, there were a couple I found disappointing, mostly because of my expectations of the author. Every story that wasn’t Disappointing went into the Good pile or the Best pile. (It’s been on my mind recently that I am not discerning enough as a reader. I love so much of what I read, but I am not great at defining what I love about it, which makes for rather vague, rose-tinted posts that don’t tell anyone much. And when I don’t enjoy what I read, but still manage to finish it and write something about my feelings, I get … spitty – see my thoughts on To Your Scattered Bodies Go by Philip Jose Farmer for an example. I’m not one of those fabulous people who can become eloquently vitriolic, although I aspire to be. I wonder if I’m not taking the right kind of notes?).

Anyway, let’s start with the Good, shall we?

I was pleased to see Nnedi Okorafor in here because I like the way she writes even when I struggle to parse what she’s saying. Her contribution to Unnatural Creatures is a story called “Ozioma the Wicked” that tells of young Ozioma’s ability to speak to snakes and how she is treated in her village because of it, until a snake deity comes to town. It’s a story told in quick, sure strokes and concentrated language, and Ozioma feels so quickly like a living, breathing character that I didn’t want this one to end. It’s a good ending though.

“The Cockatoucan; or Great-Aunt Willoughby” by E Nesbit is a tale from a completely different school of storytelling. It made me think of Carroll and Lear and their sort of madness. I loved the arch tone of this one and I loved Matilda, reluctantly clean and neat ready for her visit to Great-Aunt Willoughby, imagining what would happen if she were to speak to her aunt the way her aunt speaks to her. That she gets to go on an adventure to the Green Land instead, and that her cross nursemaid Pridmore saves the day has the same feeling as Alice in Wonderland – it might have really happened, or it might all have been a dream.

Larry Niven’s “The Flight of the Horse” and “The Compleat Werewolf” by Anthony Boucher are also fun, funny and a little madcap (if not quite on Nesbit’s scale). Niven’s story sends poor Hanville Svetz back in time to find a horse, with only a children’s picture book image for reference and no idea what he might be up against. The humour is all in the reader knowing what Svetz doesn’t and the ending is punchline funny. Boucher’s 1942 story is a different kind of romp again, involving a werewolf, some spies, a Hollywood star, a magician and a couple of German professors. It reads like an adventure story after the slow-ish set up, complete with a daring chase, a double-cross and a desperate showdown. I was reluctantly drawn in (Professor Wolf is a grumpy sod at the beginning), but ended up enjoying myself thoroughly.

And the last of the Good ones is Peter S Beagle’s “Come Lady Death”. I’ve only read two novels by Beagle: A Fine and Private Place and The Last Unicorn, both of which I enjoyed, but didn’t love. And it was the same here. “Come Lady Death” is a good story, I was interested from beginning to end, but I didn’t love it either. Something about the shape of the story didn’t work for me. I did like, however, that it felt like a fantasy version of Woolf’s Mrs Dalloway.

In the Disappointing pile we have: the oldest story in the bunch, Frank R Stockton’s “The Griffin and the Minor Canon”, which just didn’t grab me in any way; Gaiman’s own “Sunbird” which I found a mite predictable; and “Gabriel-Ernest” by Saki (H H Munro) whose short stories I am a big fan of, except this one. Also, “Prismatica” by Samuel R Delany, which I was really looking forward to reading after loving Driftglass back in January, but found fairly bland compared to his scifi; and “The Manticore, the Mermaid and Me” by Megan Kurashige, which I thought was … muddled. Although I really liked the manticore.

Finally, the absolutely Best ones. The opening story of the collection has a title, but I can’t reproduce it here. It looks like an audio-visual line with a small ink blot in the middle – that’s the best I can do. I dubbed the story “Unpronounceable”, but apparently its official-unofficial title is “Inksplot” and it’s by Gahan Wilson, a writer-illustrator-cartoonist with a creepy cast to his imagination. “Inksplot” was written in 1972 and tells its story through both words and illustrations. It is, in a word, delightful. Reginald Archer appreciates a clean and well-run household and is distressed to find a small black spot on his white tablecloth at breakfast. He summons his butler Faulks who doesn’t know how the spot came to be there and apologises profusely. Reginald retires to his study for the morning. The spot follows him there. It never moves whilst being watched, but the moment they look away … Find it and read it for yourself to discover what happens. I love this sort of odd tale and Wilson himself sounds like a fascinating chap from what I’ve read about him so far. I’ve already added a volume of his short stories to my wish list, and I can’t wait to read more. His cartoons are pretty cool too – they make me think of Gary Larson:

Next up is E Lily Yu’s “The Cartographer Wasps and the Anarchist Bees”, another story that sent me off to hunt for more information about the author. Yu has a novel coming out in Autumn this year called On Fragile Waves and on the strength of her writing in this one short story I am very keen to get my hands on a copy. “The Cartographer Wasps and the Anarchist Bees” tells the tale of the inter-relations between a human village, a colony of wasps and a hive of bees. It makes the real phenomenon of anarchism in bees a part of its plot and looks at social harmony and disruption, violence and the nature of authority. The story is available online here at Clarkesworld Magazine if you’re curious.

“The Sage of Theare” by Diana Wynne Jones is a Chrestomanci story and if I’d read nothing else in Gaiman’s selection I’d have read this because everything Jones has written is pure gold. And while her writing is a reward in and of itself, it didn’t hurt that this story features an invisible water dragon. A story with a very different mood “Moveable Beast” by Maria Dahvana Headley is another ‘odd’ one that gave me vaguely Welcome to Night Vale vibes. Angela, who works at Bastardville Dreamy Creamy (runner-up names for her hometown were Awfulton and Suck) tells the story of the town’s Beast and of Billy Beecham the Beast collector. Her tone is snarky and funny throughout and the ending was dust-your-hands-off satisfying. Again, I was happy to find that there’s more to read from Headley, who has written four books so far and has her latest, Beowulf: A New Translation, coming out in August this year. At this rate we’ll have to sell the car to pay for all the books I’ve now got to buy.

The last two stories on the Best stack are “The Smile on the Face” by Nalo Hopkinson and “Or All the Seas With Oysters” by Avram Davidson. I recently enjoyed Hopkinson’s The New Moon’s Arms for its well-drawn characters and beautiful hints of magic and “The Smile on the Face” delivers the same again. Gilla is such an appealing heroine that I’d really like to read more than just this one short story about her, her Mom and her best friends Kashy and Foster. The story captured all the awkward self-consciousness of being a teenager beautifully, and I will always be here for writers who feel no need to over-explain the magic in their worlds.

Oscar in “Or All the Seas With Oysters” wasn’t half as likeable as Gilla and I wasn’t sure at first where this story was going. Meeting Ferd improved things, but it wasn’t until he started putting together his theory about safety pins, coat hangers and bicycles that I really got interested. Poor Ferd. It’s a more dangerous world than any of us realise. In looking up Avram Davidson I found that one of his books has been published by Gollancz in their Fantasy Masterwork series. The Phoenix and the Mirror is about the poet Virgil, author of the Aeneid and powerful necromancer … so, you know, I have to read it now, (tell me you don’t want to read something with that for a blurb!).

Anyhow, I’ve prattled on far too long. This is a strong collection that I’ll go back to. I enjoy the dip-your-toe-in nature of short stories and how they can give you a glimpse into the wonderful, myriad brains of authors. Right now I’ve enjoyed it more than usual, finding that reading this collection has jump-started my enthusiasm again, which was definitely suffering under the unpredictable nature of the world at the moment.