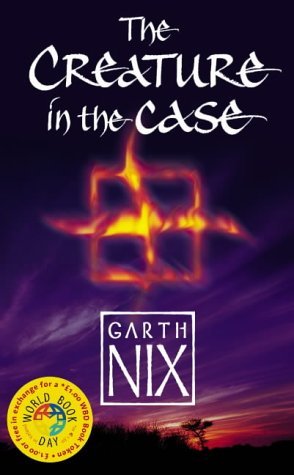 Dear The Creature in the Case,

I don’t know why I read you. Sometimes I think I’m just greedy and I haven’t learned to be content with what I have, despite my advancing years.

And I just wanted a little bit more. Despite what I said about being happy with Sabriel, Lirael and Abhorsen. After all, I thought, my newly bruised and battered heart might mend some if I could see how everyone was doing post-Abhorsen. Mistake number one.

It’s not even that I dislike Nick. He’s interesting enough. Six months after the events of Abhorsen he is determined to get back to the Old Kingdom and learn more about the magic he’d previously poo-pooed, so he and I had more in common than before. Unfortunately, you’re more concerned with Ancelsteirre and you brought into focus something that was bothering me in a vague way while I was reading Lirael and Abhorsen.

So the Southerling refugees that had been travelling into Ancelsteirre to escape a war between four states across the Sunder Sea didn’t, at first, seem to be much more than background detail in Lirael. And the rise of the ‘Our Country’ party and their desire to move the ‘problem’ of so many displaced people into the Old Kingdom only really started to impact on the main story in Abhorsen where the fate of so many of those refugees, used as magical cannon-fodder, is heart-breaking. What niggled at me then was a nebulous anger that a group of people should be moved around like pawns by a government that had no concern for their welfare.

But Ancelsteirre is a world of class division, and also one in which people not from Ancelsteirre are seen as less. Refugees can be moved out of the country because the country doesn’t want them there. An Old Kingdom trader that Nick meets briefly at the house party his Uncle sends him to, is written off simply because of where he comes from. Nick is one of the privileged few as the son and nephew of two eminent politicians and it’s a world where Nick’s “sort” don’t look at those outside of their own set. Yes, you’re a story that uses this to create a different, no less dangerous, threat to those on the side of right, but I find it far more insidious and upsetting than magical beings hungry for power. Because this is something real.

The assumption of superiority whether because of wealth, education or nationality doesn’t appear to exist in the Old Kingdom. No doubt it does on an individual level, but it hasn’t become a codified behaviour. I mentioned in my letter to Abhorsen that it is the contrast between Ancelsteirre and the Old Kingdom that provides a lot of the interest, and that one place without the other would be less fascinating. Well, you’ve proved that for me. You are a story in which a young man can steal a car, drive around destroying other people’s property with impunity, and throw his name about like a permission slip because of his connections, (and the more he did it the crosser I got). You read like a madcap 1920s adventure story, (reaching your peak with the borrowed motorcycle scene) in which consequences are unimportant. After the weight of Sabriel, Lirael and Abhorsen you’re just too … flimsy.

A lot of this disappointment is just a matter of timing. If I’d read you a few months after finishing the first three when everything had settled and dimmed a bit, we’d probably have gotten along better. Or if I’d been in the mood for a fling with an energetic little adventure instead of wanting more richly detailed worldbuilding on the other side of the Wall. The only part of you that really felt substantial was your ending where Nick confronts the creature in No Man’s Land and Lirael makes a brief appearance. (And even then I have a complaint: you insinuate that Nick and Lirael may have romantic feelings towards one another, and I strongly object to that – because, seriously, women don’t just fall for the first available man they meet, you know; sometimes they don’t need romance at all *gasp*).

Your creature was pretty cool though. It made me think of something out of Deadspace or Resident Evil and was satisfyingly scary. I also found Dorrance’s connection to the creature and the sketched-in history of that interesting and would have been there for more.

Take care of yourself.

4 thoughts on “The Creature in the Case by Garth Nix”