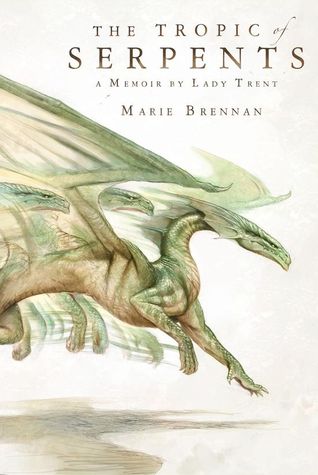 Please note: I’ve tried to keep them to a minimum, but there is at least one SPOILER in here for book one. Tread carefully.

Marie Brennan captivated me with her first volume of Lady Trent’s memoirs A Natural History of Dragons and I devoured this second offering almost as soon as I’d finished the first. If anything, The Tropic of Serpents is even better than its predecessor. The time taken over introducing the reader to Isabella’s world and manoeuvring her into a position to begin her adventures in the first book made for a fairly sedate start to her story, but here things get going much more quickly. We know most of our principle characters and while the journey will be to Eriga this time (for which read West Africa), we now know that Isabella’s world is like ours during the Victorian era in many respects, just with all the names changed.

The success of these books for me is firmly rooted in the consistency of Isabella’s voice. She is a passionate, stubborn, often rash young woman driven by her all-consuming interest in dragons, and yet an older, more worldly-wise Isabella tells these stories, with plenty of little wry asides and dashes of gentle foreshadowing. She laughs at her younger self from her old age, but you can also hear her revelling in the retelling of her adventures.

We meet one new character at the beginning of this book that I hope we’ll get to know better in the following three. Natalie Oscott is Isabella’s friend and companion, lending an air of respectability to our now widowed adventuress. Far more interestingly, Natalie is a kindred spirit in her desire to go beyond the marry-and-produce-babies-preferably-boys expectations of her father and society at large. She’s not a naturalist, however, but instead has a passion for engineering and is, upon our introduction, fascinated by the construction of wings. I loved Brennan’s exploration of Natalie’s thoughts and feelings about what she wants for herself (as well as Isabella’s own conflicting feelings about motherhood) and the first of my two criticisms of this volume is that there wasn’t more Natalie in it.

My second criticism will have to wait for a minute.

Something I love unreservedly about A Natural History, and now The Tropic of Serpents too, is the travelling to other parts of the world and learning new customs and worldviews. I had a big thing about travel and adventure books during my teens and read a lot about extraordinary journeys through some of the most inhospitable bits of our planet, which is perhaps ironic for someone who really does not like to travel at all, but these books satisfy that part of me that continues to enjoy such stories. First Bayembe and then Mouleen are as interesting for their environments as for their culture and I particularly enjoyed Isabella, Natalie and Mr (Tom!) Wilker’s very necessary immersion into Moulish society when they enter the swamps of the Green Hell. That Isabella is now open-minded enough to see the importance and value of doing so also nicely shows how she has matured in the three years that have passed between books one and two.

That the group’s research gets caught up in the political situation in Bayembe is also interesting. Despite her desire to steer clear of such things, it felt significant that Isabella realises she and her companions cannot remain aloof. She negotiates with the ruler of Bayembe for a way into Mouleen, but in doing so and in agreeing a ‘price’ for this permission she becomes as embroiled in the power struggle as any of the other players. Ultimately, her decision seems to be the ‘right’ one, but I’m interested to discover what the longer-term consequences her older self hints at might be.

And then there’s Brennan’s approach to dragons themselves. I love everything about this. Because what if dragons were real? What if, for as long as and longer than there have been human records, dragons have lived and breathed and adapted to all parts of our world? What would those adaptations look like? What differences would be found in the breeding cycles, mating rituals and hunting practices of dragons indigenous to different regions? How would local human populations respond to dragons? How would dragons adjust to survive increasing human populations? What myths and stories would we tell? What would our history look like if dragons featured in the historical record? Would we have worshipped them? As Isabella discovers the answers to some of these questions, so do we, and I’m definitely there for that journey.

Which brings me, sadly, to my second criticism of Tropic – there just weren’t enough dragons. While I loved all the broader exploration, I was disappointed not to see many dragons after all the hardships Isabella and her friends survive (not least of which, leeches, urgh *shudder*). In A Natural History there was a moment (if you’ve already read it, you’ll know the moment I mean) that gave me that delicious shiver of delight, I could picture it that clearly. There was no corresponding moment for me here, (there was an almost moment, but it slipped past too quickly and wasn’t repeated). I guess I can see how this would mirror a naturalist’s actual experience – I don’t imagine you always get that picture perfect instant that makes everything worth it, no matter how hard you work or how long you’re out in the field – but as this is fiction, I’d have liked a little bending of the rules for the sake of awesomeness.

All in all, however, this was a satisfying second foray into Isabella’s memories of a life well-lived. They are so much fun (thanks largely to the manner of the telling) and fascinating for the building picture we are getting of dragons in all their infinite variety. This was an enjoyable re-read when I was feeling in a bit of a funk that did exactly what I hoped it would do. You could do a lot worse than these books if you’re ever feeling a bit low. (Because … dragons, am I right?!)

13 thoughts on “The Tropic of Serpents by Marie Brennan”