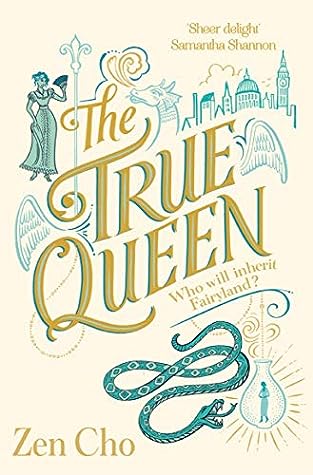 I loved the energetic and insightful Regency fantasy adventure that was Sorcerer to the Crown. It left me wanting more Prunella, Zacharias, Makk Genggang, Damerell, Rollo and Aunt Georgiana Without Ruth, and more hare-brained schemes, misdirections and misunderstandings. And The True Queen certainly delivers a lot of what I wanted.

Prunella and Zacharias take on supporting roles this outing and we are introduced to two new characters, sisters Muna and Sakti. Washed up in Janda Baik after a storm, neither of them can remember who they are or anything about their lives before waking up on the beach, and so Makk Genggang takes them into her household and her protection. What is clear from the start is that the sisters are the victims of a curse that has robbed Muna of all magic and is slowly erasing Sakti altogether. It is only after they make an attempt to cure themselves that they spark a potentially dangerous political incident and get sent off to Prunella in England.

From the get-go Prunella is her own irrepressible self and I was delighted to see her again, turning some people into rabbits while trying to get other people kicked out of the Royal Society of Unnatural Philosophers for persecuting female thaumaturges. At the same time though, I was a little disappointed. She has so many more duties now that she doesn’t have the time to really pay attention to or help Muna when Sakti goes missing in the Unseen Realm on their way to London. And we don’t really see much of Zacharias at all in this volume. On the other hand, that does mean that we and Muna get to know more about Henrietta Stapleton who, while not as caustic as Prunella, is enchanting in her own distinct way.

I enjoyed very much the parallels between Muna and Henrietta’s predicaments. Both women are prepared to efface themselves for the people they love, Muna for her lost sister and Henrietta for her both her sisters and her parents. Neither are in a position of power and they see the sacrifice of themselves as the only meaningful move they can make. That both of them, with a little help from the other, are able to find another way forward and one in which they are able to continue to be themselves is exactly the kind of story I wanted. The theme of female self-sacrifice via marriage or complete dedication to another person’s (man’s) more important life/work is one that runs through great swathes of the Nineteenth-Century English Literature I read at uni and it really gets my goat.

However, that is not to criticise the love that underpins both Muna and Henrietta’s desire to sacrifice their own needs for those of their families. Cho portrays love and affection with such a deft touch that what could be caricatures of the loud sister and the quiet, or the deeply-in-debt dad willing to throw his daughter away to save himself, are instead more beautiful portraits. Yes, Sakti and Muna have very different temperaments and outlooks (for slightly more unnatural reasons than many siblings), but their affection for each other is real. And Henrietta’s family, all of whom she desperately tries to protect, prove themselves worthy of a lot more trust than she’s given them, (I know I’m being vague, but these are some of the loveliest moments in the book and I’d hate to spoil it for anyone). The love of families (whether born into or found) runs through all the storylines in The True Queen, from Makk Genggang’s household of “witches, apprentices, servants, slaves, bondswomen, poor relations, strays of all descriptions and even a number of lamiae”, to the students of the Lady Maria Wythe Academy for the Instruction of Females in Practical Thaumaturgy, to Rollo and his dragonish Threlfall family.

This book continues in the same vein as Sorcerer to the Crown to question and compare social and cultural norms. The English raja of Malacca, for example, has a brick house (in a part of the world in which wooden buildings are predominant) with “an air of permanence and power” into which “two of the Sultan’s palace on Janda Baik” would fit; and yet the Stapleton family residence in Shropshire “is even grander than the raja’s house” and is only used as their summer home. Without saying anything more Cho prompts us to consider the relative wealth of Malaya and England and how surroundings, buildings, appearances are all a part of the communication of power. Henrietta’s mother wants to use Muna as an exotic curiosity to communicate social status at Amelia’s coming-out ball (because while an English magicienne is unthinkable a foreign witch is desirable – gotta love those double standards), and yet Muna has no wealth or status, no political or social power, and is dark-skinned and female to boot – all things that put her at a disadvantage in her attempts to muster help and save her sister.

And yet Cho achieves all this without apparent effort, without her story becoming heavy or unwieldly. The plot here is as involved as in her first book and while perhaps a teensy bit more predictable, still a joy to unravel; both the new and the returning characters are just as much fun to keep company with and the humour is just as sharp. A lot of my notes are just lines scribbled down that I’d love to be in a situation to deliver:

“I do have a vindictive temper when provoked, and I am fond of getting my revenge, so there can be no harm in my gaining a reputation for being vengeful.”

“Her Majesty finds nothing so cheering as a spot of indiscriminate slaughter.”

“You had best attend to your rabbits, Damerell. They speak good sense.”

“She does not labour under the disadvantage of having parents.”

“It is felt now that the practice of eating one’s enemies lacks elegance.”

If only I didn’t suffer so terribly from an inability to speak in front of any kind of audience!

Finally, I shall now squee about the delights I cannot talk about in anything more than the most cryptic of ways for fear of spoiling this bundle of fun for you: the rabbit with blonde curls; “we hardly have an attack more than once a fortnight”; the polong (oh my goodness, loved her so much!); paintings of grumpy old men; the Fairy Queen has lost her Virtu (snigger); Rollo and Poggs (all the hearts forever); the fine ones; the rescue of Mr Damerell (ROTFL); a miniature Aunt Georgiana (aww); Not Henrietta (funny, then creepy, then funny, then creepy); the imps used for lighting – “sometimes they weep” (chokes on a sob); what the Stapleton family knew all along (my heart!); a marriage that fixes everything; and, “for a time there was no need for conversation.” (Oh my heart! Hurrah!).

I have done a great deal of comfort reading this year so far, as so many of us have. Sometimes I feel like I’m not trying hard enough, other times I don’t have the energy to try, let alone worry about whether I am or not. So The True Queen will take its place on the shelf (currently it’s a repurposed shoe-rack, but one day it’ll be a proper shelf) with all my other delightful re-reading material, definitely to be revisited along with Sorcerer to the Crown when times are trying and my spirits are low. Perhaps you’re in need of something like that right now? … May I recommend Zen Cho to you?

15 thoughts on “The True Queen by Zen Cho”