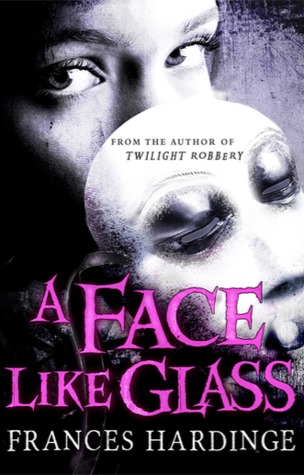 Frances Hardinge writes stories that seem to have a life of their own. You can read the blurb and think you know what you’re getting yourself into, only to find that her story has other ideas. And that’s a pretty incredible magic power to have, because it’s real. If we ever needed proof that magic exists, it’s surely here in Hardinge’s writing.

It’s certainly nice to know that Fly By Night and Twilight Robbery weren’t a fluke: a one-off duology in an otherwise fairly run-of-the-mill body of work. I feel confident in saying that Hardinge is one of my favourite authors now, and I feel a thrill of glee knowing that I still have some catching up to do, that I haven’t read everything she’s written. Yet.

In the claustrophobic underground city of Caverna people are born expressionless and go to great pains to learn ‘Faces’ to suit their social position. Facesmiths are employed by the wealthy members of the Court to train them in sets of expressions, so that they can communicate and, more importantly, conceal their intentions and desires. At the other end of the social spectrum, drudges learn so few Faces they cannot express any dissatisfaction, anger or pain. And so, willingly or not, everyone is lying.

Found in Cheesemaster Grandible’s tunnels as a child and raised by him in his lonely domain, Neverfell knows there is something wrong with her face, but not what. When she learns she is not ugly, as she thought, but that she is so expressive her every thought shows on her face it is already too late for her to retreat back into the safe obscurity that Grandible provided and she becomes embroiled in Court machinations and in rebellion. Like Mosca Mye from Fly By Night before her, Neverfell is underestimated, energetic and curious. Unlike Mosca, she is also (a little too) trusting and naïve, but in a society as viciously complicated as this underground city’s is, this only makes her unpredictable; not knowing the rules, she doesn’t play by them. Which, it turns out, is the only way to escape the giant trap that is Caverna, and all the smaller traps that are nested, Russian-Doll-like, within it.

But enough about the plot, what I was most blown away by was the seemingly endless supply of crackpot ideas that Hardinge has managed to squeeze into this book. Just the idea of a group of people unable to form expressions upon their faces would have been enough for a regular author, but for Hardinge it is only the mouth of the cave. In Caverna craftspeople like cheesemakers, vintners and perfumiers are artists and alchemists both. Cheeses and Wines have personalities that need to be pandered to, soothed and quieted, coaxed and cajoled, until the product has acquired uncanny abilities: Perfumes can be used to sway emotions, Cheeses can induce visions, Wines can draw forth or repress memories. The early chapters paint an engrossing picture of the very physical, dangerous work that goes into the care and cultivation of Cheese and, honestly, I could quite happily have read about that for the next four-hundred and eighty pages.

Hardinge’s not content to stop there, however. She has created the Grand Steward, the most powerful person in Caverna, for whom all these delicacies are made. A man so old that “the colours in his soul are fading, and his passions are going out one by one, like stars”, who craves sensation as proof of life. A man so paranoid that his Court is riddled with traps and tests and his very personality has been split down the middle by his need to remain vigilant as he only allows half of his brain to sleep at a time. She has created, too, the Zookeeper and the Kleptomancer, Caverna’s master criminals; and, my personal favourites, the Cartographers, who’re all as mad as a box of frogs. But then, who isn’t touched by madness in this fungal-lit underground world of blank faces and grumpy cheese?

And then there’s the author’s delight in words. I will always love writing that is practically jumping off the page and into your mouth, that needs to be read aloud. Take, for example, this sentence:

“Wicked glints slunk along the iron angles of the mangled mangle.”

Read it out to yourself. Isn’t it fabulous? Doesn’t it sound just like the image it describes? I love this about language. And I love writers who know what they’re doing with language and can make this happen. I have a very short list of authors who’re great at it, and Hardinge is one of them. And it’s something that works wonderfully with names. If we were judging character by name alone Cheesemaster Grandible sounds like he’d be a cantankerous old man, Madame Vesperta Appeline sounds like a woman who hides a venomous nature behind a flawless mask, Master Harpsicalian sounds like he might not be all there. Tybalt Prane sounds like he’d be dangerous. Place names, and Cheese and Wine names, are all as much fun to conjure with: Twirl Stair and Sallow’s Elbow, Whispermole and Mumblecheddar, Smogwreath and Cardlespray.

Like her heroines, Hardinge’s stories have minds of their own. They run unexpected courses and prompt unforeseen thoughts. They explore that strange, in-between place that connects childhood and adulthood. They have all so far discussed power in one way or another, and all of them have a broad streak of rebelliousness in them. They are books that encourage their readers to challenge the status quo and to question everything. They address the importance of speaking out, and show how agency can be removed when one loses the ability to express oneself – if an idea is not expressed it cannot be shared between individuals, it cannot be agreed upon or argued against, it cannot be acted upon. They’re books that have something to say whether you’re young or old, and they have ridiculous amounts of fun saying it.

I think I may be in love with Hardinge’s brainbox.

24 thoughts on “A Face Like Glass by Frances Hardinge”