Take a cup of each of the following: Nancy Drew, the Famous Five and the Usborne Puzzle Adventures; throw in a generous handful of The Goonies, Monster Squad, and some Young Sherlock Holmes if you have it; add a pinch of Scooby-Doo, Where are You? and just a few Lovecraftian tentacles, blend together and pour through a strainer to remove any lingering lumps. Chill for thirteen hours, then serve lavishly dressed with tropes and stage directions.

What I’m trying to say is that this was a bundle of fun to read and definitely something I will read again … but it won’t be everyone’s drink. 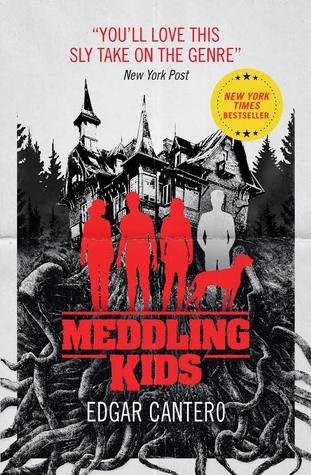 Peter, Nate, Kerri and Andy, and Sean the dog, were the Blyton Summer Detective Club. During their summer holidays spent in Blyton Hills they tackled mysteries in true Famous Five/Scooby-Doo fashion and always exposed the bad guy in the costume in the end. Even in 1977, on what turned out to be their last case. But after that case none of them ever returned to Blyton Hills. They grew up and life got hard. Peter committed suicide. Nate moved through a series of mental institutions, Kerri started drinking and Andy broke the law. And now Andy has decided that it’s time for the BSDC to reform, return to Blyton Hills and fix whatever it was that went wrong with that last case.

I should say, before I start rambling, that I actively hated Scooby-Doo, Where are You? and the Famous Five books. I won’t share my Scooby-Doo rant with you, I will just say that there was Not. One. Thing. I liked about that show; and as for Blyton, I think I read a whole two books by her before rejecting her writing style out of hand. Whether I liked these things or not however, I have still absorbed them, (television, in particular, has a way of worming into your head even when you’re not paying attention). And I still found this story a blast. Go figure.

A lot of the fun I had reading this was because of the way in which it’s been written: Cantero sometimes presents dialogue in script fashion, uses occasional stage directions, and peppers the text with references to the moods of scenes, camera angles and shots, entrances and exits, and extras throughout. It’s all done playfully, with a knowing nod to the reader and it was a delight to read. I can see how this might annoy other readers, but I liked that it put me in the position of viewer, slightly removed from the action, but able to appreciate how it was all being done. Cantero also anthropomorphises things along the way, trees, cars, a radio in a diner and most notably Kerri’s hair, and as someone who worries about their furniture’s feelings, I found this hilarious. What’s more, the author does these things so consistently that it adds an energy to the story I don’t think it would otherwise have had, no matter how scary the monsters.

Because, as a number of characters make a point of saying, this has all been done before. And a lot of the joy in reading this was recognising and revelling in the tropes. A haunted house on an island in the middle of a lake with secret passages and booby traps, an abandoned mine, pirate treasure, a cloaked figure in an attic window, a big creepy-ass leather-bound book, a basement dungeon and anonymous notes are all tantalising touches that remind the reader of so many childhood television shows and books; while an obligatory connection to Salem, a monster autopsy, a nasty little nod to The Blair Witch Project, and a blockbuster-worthy moment involving a helicopter gunship remind the reader that these kids, and we, have grown up.

Oh my goodness, and then there’s Tim. Tim is Kerri’s current dog, descended from the original BSDC dog Sean. Tim is also a witty, adorable, intelligent, hilarious, important member of the group and proof positive that canine companions always improve stories, (take any story you didn’t really enjoy all that much, then reimagine it with a dog – fixed! I mean, sure, it doesn’t work with everything, (nothing’s going to make Metro 2033 a happy book, for example), but dogs definitely add joy and give you someone to care about even if the rest of the characters are asshats). (Having said that, Scooby-Doo doesn’t. Scooby-Doo is just as much of an asshat as the humans he hangs with. There’s always an exception to prove the rule, I guess).

Fortunately, most of the cast of Meddling Kids are likeable without needing Tim’s help. I enjoyed Andy’s bad-assery and talent for great entrances, Nate’s snark and his handling of Peter (Peter, whether hallucination or ghost, is a minor league asshat), and Kerri’s smarts and generally sunny disposition (under which lurks her abject terror). Captain Al, the group’s old friend, is still a reliable ally even after thirteen years and a drinking habit, and the new deputy sheriff, Sam Copperseed is wonderfully stoic: Clint-Eastwood-style. Even Joey Krantz, the jock who bullied Nate, Kerri and Andy back in the day, turns out to be a fairly decent adult, (and as I was expecting one of these three, the Captain, the Deputy or the jock, to be revealed as a Bad Guy, they’re being trustworthy made for a pleasant surprise).

Any author who can have their characters cracking jokes while monsters are literally cramming themselves through the door to eat them will have my attention for a few minutes. I’m a sucker for great lines in the heat of battle, just as I’m a sucker for great fights. If that author can throw in casual references to things as various as Wyndham’s The Chrysalids and Captain Planet and the Planeteers, I’ll hang around for at least half the book. When that author also gifts their story with an adorable Weimaraner who will do anything for his squeaky penguin, I’m already making a note of everything else that author has written. Throw in a grumpy canary, and I’m sold.

Let me leave you with that (understandably) grumpy canary:

“Andy suddenly noticed the canary expostulating in the most harmonious terms. She opened the cage, realizing they could have freed it ages ago, and the little bird hopped indecisively on the brim of the little door, then tried to flutter out against the wind and lost. It settled in the shelter of the backseat, where the leather was torn and cozy foam stuck out, and it cowered there, tweeting unambiguously angry messages at each team member on the boat: Fuck you! And fuck you, fuck you, fuck you, and especially fuck you!

And Tim yapped back with immense joy at the new friend he’s made.”