I read the three books that currently comprise McDonald’s Luna series back to back over an intense couple of weeks. I am going to talk here about the first two books New Moon and Wolf Moon because to my mind they form a natural pair, and then I’ll follow up this post with a second one in which I talk about Luna: Moon Rising which is a different beast, about which I have different things to say. 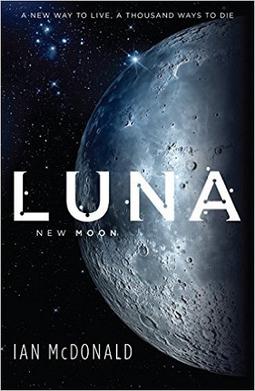 Set in the most hostile of environments and peopled with a vicious and ambitious cast, these first two volumes took me completely by surprise. Everything about McDonald’s industrial lunar society in this trilogy is fascinating, his characters often larger than life, and after a slow start in which I struggled to get my bearings, acquaint myself with the large company of characters and catch onto the multilingual borrowings strewn liberally throughout, I tore through the rest of these books as though my life depended on it.

Welcome to the moon.

The first rule is that the Lunar Development Corporation, the LDC, owns all organic matter. Your lunar life will be ruled by the Four Elementals: oxygen, water, carbon and data. If you don’t have work, you don’t have money to pay for these things, and they will be denied you. When your clothes are dirty they are recycled. When you die your mass is recycled. (This closed-loop system made me think briefly of Becky Chambers’ Record of a Spaceborn Few. I say briefly because of the stark contrast between the Fleet’s barter and cooperation precepts and this moon’s principles of purchase and competition).

The second rule is that you are not a citizen of the moon, you are a client, as is everyone else. The moon is an “offshore industrial outpost”. You have no rights and there is no law and, thus, no crime. There are contracts, everything is negotiable and it’s all business. The Court of Clavius is the place to go to contest or thrash out a contract, but only if you can afford a lawyer. It is a place of performance, but also one in which trial-by-combat is countenanced. In a society in which everything can be negotiated death is the ultimate decider.

The third and last rule is that anything goes. This is the most permissive society humanity has yet known. Your identity and sexuality are whatever you say they are, for as long as you say they are. Drink, drugs, kink, violence – if you can think it, you can do it.

All rules are subject to change.

Out on this new frontier, five families dominate the farming of the moon’s resources. They are known as the Five Dragons: the Asamoahs, the Cortas, the Mackenzies, the Suns and the Vorontsovs. And does the name ‘Dragon’ have a whiff of organised crime syndicates and dynastic struggles about it? It should, as the Five merrily intermarry to seal deals and take the resulting children hostage to ensure compliance; make assassination attempts against each other, swindle, gamble with and race each other, and in all ways and at all times try to outdo one another.

They are ‘Dragons’ in other ways: I don’t think there’s one member of the Five Dragons who isn’t physically magnificent/terrible, incredibly intelligent or massively ambitious. Everyone is disgustingly larger than life. Their ambition, their drive, their will to succeed defines them and there’s no room for anything else, except perhaps their vanity. McDonald hints in many ways throughout this series that the people of the moon are a branching out of humanity and I felt that most in the personalities of the main players: to succeed in the harshest of environments you must, yourself, be harsh. Determination and ruthlessness have bred true.

The story follows the fate of the Corta family most closely. The Cortas are the newest of the Dragons, their matriarch Adriana having arrived on the moon originally to work for the Mackenzies before she formed her own business mining helium-3. As families go it becomes clear that they’re as good as it gets, but I was convinced for most of New Moon that the Cortas were the bad guys. It wasn’t until the Mackenzies showed up that I realised the author is only dealing in shades of grey. I really enjoyed this, how McDonald presented the rich and ruthless Cortas first (admirable, I guess, if not exactly likeable) and then brought on the Mackenzies, who are, like, ninety-nine-point-nine percent worse; and then introduced the Suns, who are The. Worst. The Cortas went from arrogant asshats to scrappy underdogs quicker than you can say Corta Hélio.

(I realise I haven’t mentioned the Vorontsovs or the Asamoahs there. If any one of these families is a ‘good guy’ it’s the Asamoahs, and I’d love to have read so much more about them. As for the Vorontsovs, they’re just … well, they’re very odd).

I struggled with there being so few likeable characters. Not that they’re not compelling, but it wasn’t easy to empathise with any of them. As if aware of this lack, McDonald gives us Marina Calzaghe of Earth. She is the closest we get to having someone to identify with. When we first meet her she is struggling for air and water in the poorest, highest area, Bairro Alto (the richer you are the deeper you burrow on the moon, away from all that pesky radiation and vacuum), newly arrived from Earth and wondering how it all went to crap so quickly. Her chance job as a waitress at a Corta party sees her come to the family’s notice, and she becomes first a surface worker for them, and later an agent for the matriarch Adriana and companion to Adriana’s lawyer daughter, Ariel. Marina’s journey gives us a more realistic glimpse into the workings of the Corta family, beyond the parties and boardroom meetings. (Interestingly, Marina is never described in the big, glowing terms reserved for Dragons, despite being a ‘Jo Moonbeam’ – still Earth-strong in comparison to the weaker and ever-elongating first and second lunar generations).

I’ve deliberately avoided talking about plot specifics in these first two novels. I frigging loved the twists and turns and increasing savagery of the battle between the Cortas and the other families, and a lot of that enjoyment came from having no idea what was coming next. Far be it for me to ruin someone else’s entertainment by giving something away inadvertently.

And McDonald’s writing is great. It’s tight and evocative and he has created a truly captivating cast of characters, even if they’re none of them particularly lovable. There is also a clever, clean and deeply satisfying structure to these first two books and his plotting is pure controlled tension. So, highly recommended, absolute blast, and slightly miffed I didn’t read these sooner so I could include them in my Books with a body count post, because there are some cracking deaths!