It occurs to me that Luna: New Moon, Luna: Wolf Moon and Luna: Moon Rising are really just one big book chopped into three … 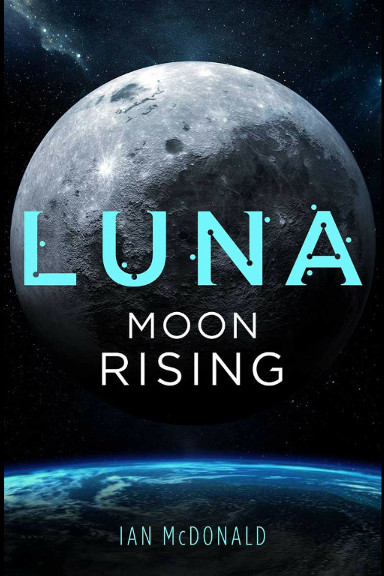 Anyway, I’ve talked about the surface stuff going on in Luna in my previous post, now let’s talk about the ideas stuff. This is going to be a bit random. Stick with me:

“This world is a laboratory, where humans experiment in culture and societies and philosophies. New politics, new religions. To the end of creating something that will endure.”

In Wolf Moon it becomes clear that McDonald’s story is about more than a handful of power-crazed families fighting amongst themselves. They are, in some ways, only a symptom of the moment of change that has arrived. A turning point for the moon in which either Earth takes back complete control of its satellite as a resource, or the people of the moon win their independence from Earth and see their workplace become their home. (This review by Hugh Charles O’Connell for the Los Angeles Review of Books speaks eloquently about the financial/political aspects of the situation (with SPOILERS) and while I understand what I read here there’s no way I could replicate this level of writing).

There were plenty of suggestions in the first two books that the moon is on the brink of becoming a new, separate society from Earth, a distinct and alien culture: the Sisters of the Lords of Now were trying to create a society that could go interstellar, the Dona Luna superstitions have a strong whiff of a proto-religion about them, the permissiveness, the colloquiums, the hot-shop and printer lifestyle, and, of course, the physical changes in those born on the moon, are all small steps away from mother Earth and towards independence. But it is only in Moon Rising that the story becomes much less about the dynastic wranglings of the Five Dragons and far more about what the moon and its people will become. Is it to be an automated thing under Earth’s control, a fully-fledged world, free to develop on its own course, or something else entirely?

I was struck by how … unattractive … this moon is, physically. In being mined for resources to fuel life on Earth and peopled only by those who are there to make money, its barren surface is scraped and flattened and littered with industrial garbage. It is not a beautiful world nor one that anyone is trying to make beautiful (the giant penis, King Dong, that surface workers have drawn out on the regolith is not something to be proud of). The Dragons have each made their own cities and seats of power, and these places are stunning, (particularly Boa Vista, the Corta family’s garden-base and the Asamoah family’s lushly green farm-city of Twé), but they are primarily expressions of power (and in the case of Twé, necessity). Beauty on the moon is inextricably linked to wealth.

If you don’t feel that where you are is home, are you more careless of appearances and sensual details? Or are the people of the moon just less concerned with such things because their society is far less focused on ownership? If you don’t own something, do you still work to make it beautiful for yourself and others?

Interesting, too, that it is the moon that is looking outwards to the stars, planning habitats and exploration, while the Earth, swept with droughts and disease, seems paranoid about it’s “hostile nation” satellite and much less inclined to move beyond its bounds. Having lived in one hostile environment, I guess others hold less terror, and the moon has certainly cultivated a driven, explorer spirit in its inhabitants.

One of my small joys in these books was Lucashino’s love of baking. He’s a vain, primping, childish, noodle-brained tramp, but he’s also brave and gentle and full of love (maybe a little too full of it, if you know what I’m saying). New Moon opens with Lucashino the Moon Runner and Moon Rising closes with a very different Lucashino. In doing so, is there the suggestion that this society will broaden out? It has been formed and led by determined, ruthless trailblazers, can it also nurture artists, craftsmen and lovers? Can it (will it) protect the gentler, kinder aspects of old humanity too?

There is a change of pace in this third book that was more noticeable for having read these books back to back. If the first two books are about big, dramatic events, this last one is about aftershocks and damage done. The birth we are witness to is painful and traumatic and ultimately the surviving characters have to decide if it was worth it. So many characters have sustained damage, a lot of them from the younger generation, and I wonder what kind of Dragons they will become.

I’d have liked to see Marina get to where she was going to. She was used by McDonald to show a lot he otherwise would have to have explained, the decent thing would have been to give her a more defined ending/beginning.

Finally, there is a scene in Wolf Moon in which a previously lunar-dwelling character sees, for the first time, the moon from Earth. Up to this point in the story life on the moon has dominated to the exclusion our home planet, whose only value to lunar society is as the recipient of its goods. Suddenly, we are shown the moon hanging in the skies of Earth, bejewelled with the lights of industry and habitats, yet so, so small. It’s a crafty, discombobulating change of view after all the giant, dramatic goings-on, but it also underlined what Moon Rising finally makes apparent: the moon is a world entire.

I hope that McDonald will revisit his moon. This trilogy feels as much like a starting point for further books as it does a complete story. I was pleased to discover that he has already written a novella, The Menace from Farside, set on this moon, but earlier than the Corta era, which I hope is just the beginning.

(N.B. Oh my goodness, I haven’t mentioned the University of Farside! Absolutely kickass! Needs its own mini-series, please!

I also haven’t said anything about all the sex! There is just so much of it, and in so much detail! By all means love who you love, but please do it behind closed doors (preferably with the lights out and as quietly as possible). Those of you who know me by now know this is so not my thing and a great reason for me to DNF a book. So, I guess, that shows how much I enjoyed everything else about this trilogy? But definitely be warned – so much sex. Icky!)