This was a good solid reading experience. It had some great characters, an incredible world for them to play in and a political shenanigans plot that bounced along at a steady pace without ever being so indecorous as to break into an all-out run.

I should be squeee-ing all over the place. 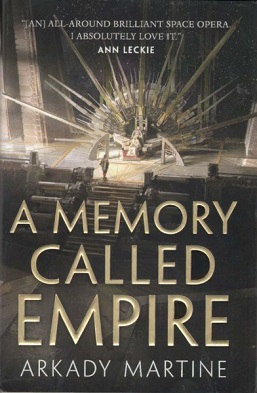 I enjoyed reading this. I was invested in the characters and events, I laughed out loud at some of the snarkier dialogue, and I had Thoughts as a result of Martine’s exploration of language, colonization and what makes a person an inviolate individual. I found it a clever and absorbing read. But I also know that I don’t plan to read it again. I feel that I have unpacked everything that I am going to find in A Memory called Empire. I don’t know whether to be disappointed in myself, or the book.

Let’s talk about a couple of the Thoughts first and maybe I’ll come to some understanding of what’s bothering me as we go:

For those who don’t already know, the story starts something like this: Mahit Dzmare of the small, independent Lsel Station, is hurriedly chosen to be the new ambassador for the Station and sent into the heart of the Teixcalaan empire. She’s young and not a little in love with Teixcalaanli culture (particularly its plentiful supply of literature and poetry). To guide her in her new role she has an imago of the previous ambassador, Yskandr Aghavn, implanted in her skull. Imago technology is unique to Lsel Station and is a way of preserving a person’s knowledge and experience. Mahit’s imago of Yskandr is not only out of date by fifteen years, but also appears to be malfunctioning, leaving her to fend for herself soon after her arrival in the City.

The idea of the imago technology is a great one to chew on. This little bit of kit is installed at the base of the skull and puts a whole other personality into the head of the bearer. Distinct at first, this second person lends their knowledge to their host and can even go so far as to take over their host’s body to perform necessary actions. Over time the two personalities meld into one. When you live on a space station and even the smallest mistake could mean your life, there is a very definite value to such experience and expertise being quite literally at your fingertips.

Mahit carries the imago of Yskandr. We only ever see the two of them distinct from one another and sharing the same body, (we never see them fully ‘blended’). There is emotional (chemical) bleed from Yskandr to Mahit sometimes, and he takes over her body on occasion.

Mahit’s experiences both before and after her imago malfunctions beg so many questions: is a person merely their endocrine responses? Merely the sum of their memories? If two personalities are put together into one body, do they become one person? Is that resulting person a separate identity from the two it’s a mix of? Are they more, or less, than before? Where’s the line? Is there a line at all?

Also, by keeping the host’s name, the suggestion is that the imago is absorbed into the primary identity. What if the imago is a stronger personality than the host? Can the imago take over?

Even more chewy is Mahit’s other internal struggle, between her desire to be accepted into Teixcalaan, a culture and language that she has passionately studied but which perceives her as a ‘barbarian’, and her love and pride for her home. Within Mahit’s character Martine explores how an empire uses its culture to overrun its colonies and change them into more of itself. Like a virus.

The stories we tell ourselves become our beliefs and tie us to our own people. By sharing a language of images and ideas we ensure that we are understood and that we understand. If we’re telling ourselves someone else’s stories we risk becoming alienated from our home, judging ourselves by other standards and becoming absorbed (and yet never truly accepted) by that other culture. By offering both education and entertainment based upon its own values and ideals, an empire draws other previously independent groups, peoples and planets into itself.

And again I found myself asking: as a product of both Lsel Station and Teixcalaan education, is Mahit one person? Are these two ways of being blended, or does one dominate? Is the resulting person (or society, or world) more, or less, than before? Where’s the line? Is there a line at all?

Both Lsel Station and the Teixcalaan empire are concerned with continuation, they’re just working on very different scales.

I’ve always loved sci-fi books that deal with language in some way, and ordinarily I’d have a lot to say about the Teixcalaanli language, but honestly, others have said it better already. The only detail I particularly liked that I’ve not seen mentioned elsewhere is that in the Stationer language there is only one word for ‘bird’, because they only really need the concept, being on a space station and all. The Teixcalaanli language has words for the many varieties of bird that it has encountered, being a planet-based society for the most part. I will remain eternally fascinated by the fact that without the language to express it an idea cannot be shared.

And I think, that what has made me feel less than full squeee about A Memory Called Empire is that none of the Thoughts I had while reading it were my own. I didn’t have to work these things out for myself, Martine gifted them to me. I appreciate the ideas that were explored. I like that nothing was reduced down to a simple binary, and that nothing was condemned. But I feel that there’s nothing to gain from a reread of this book because it was all given to me so easily on the first read.

I’m not saying this wasn’t fun – it was a heap of fun. And I’d very happily read more set in this universe, especially anything in which Mahit and Three Seagrass reprised their roles, and maybe had something to say about aliens… (what’s that? A Desolation Called Peace is coming out next year? I’ll be there!)

What I am saying is that if this had been a library book, I’d have had no reservations about returning it when my time was up, and wouldn’t have felt the need to keep it in my work locker away the barbarian public until I had my own copy.

As it is, I’m going to donate my copy to the library when I get back to work.

And I already know two customers who’re going to love it.