During Sci-Fi Month 2018 I first made the acquaintance of the most charming of shapeshifters, Esen-alit-Quar, in Beholder’s Eye by Julie E Czerneda. Then in Sci-Fi Month 2019 I renewed our friendship when I read Changing Vision. So it seems only fitting that I should round off this year’s Sci-Fi Month participation with the final part of Czerneda’s original Web Shifters trilogy, Hidden in Sight.

If you have any intention of reading this trilogy please be aware that from here on in SPOILERS lurk. I’ll keep them to an absolute minimum, but something might slip, so please, tread carefully! 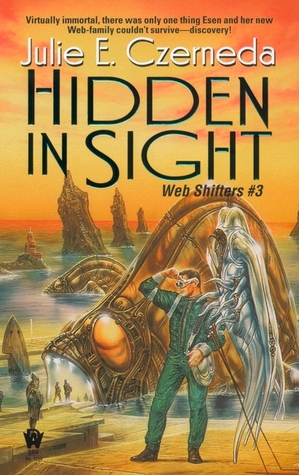 What continues to impress me about these books is that they explore a lifelong friendship between an alien female and a human male without once going gooey. What I enjoyed most about this book is that the friendship between Esen and Paul is not front and centre of the story this time round. It’s still there, a part of the foundation upon which Esen is built, if you like, but this story is much more focussed on her having to confront, and accept, those who are not like her.

The Kraal, are very non-Esen-like and play a larger part in this outing. A tightly-structured splinter-group of humanity with a fondness for elaborate … everything – from tattoos demonstrating allegiances, to hospitality rituals; from long-standing family feuds and takeovers, to battleship décor – the Kraal are combative, elitist, secretive, and very fond of both their high-tech weapons and their poisons. If you were to receive a letter from a Kraal, chances are you’d die just trying to open it and they’d be disappointed in you, but not terribly surprised.

For the warm-hearted, charming, mischievous Esen-alit-Quar the Kraal are a people she knows far more about than she’d like, thanks to the Skalet-memories she carries. But then, of all her Web-kin, Skalet was her least favourite. The two sat at opposite ends of the personality spectrum and Esen shies away from and compartmentalises many of the Skalet-memories she possesses. Naturally, Skalet made her home among the Kraal.

Hidden in Sight is all about Esen and Skalet’s relationship as Web-siblings, about grief and loneliness and about finding something in common even with those you can’t imagine having anything in common with. I can’t say much more than that without giving away a big spoiler, but this idea is taken up in other ways by the story: another of the species we’ve encountered previously are Tumblers, crystalline beings for whom tumbling is their only means of locomotion. The Tumblers are slow, patient beings, fond of lengthy, thorough messages that remain cryptic to their non-Tumbler recipients, and they are more than a little grossed out by the “flesh-burdened”. Having encountered a dangerous “flesh-burdened” being on their side of Pico’s Moon that has killed a number of Tumblers, the rest of the Tumblers decide to warn all flesh-burdened beings to remove themselves from the planet. Unfortunately, their clear statement isn’t so clear to anyone who isn’t crystalline by nature and more people touch down on the moon as a result. The situation escalates over the course of the book because of a failure in communication. Communication that requires cultural understanding and empathy.

The whole episode is told with Czerneda’s now familiar heart and humour, but this doesn’t detract from the potentially devastating outcome when the Tumblers decide to employ mercenary Ganthors to communicate their wishes for them. Misunderstandings can be fatal.

Esen, too, has been misunderstood by many. While the reader and Paul know her to be child-like, curious, charming and maybe just a tad accident-prone, those who have hunted her have seen something monstrous: a near-immortal being able to perfectly transform itself into any form, a devourer of all living matter, proof against all known weapons. By now, Esen has a small circle of friends, collected by Paul, who know at least some part of the truth about her and protect her identity and location. Part of Esen’s journey in this book has been to learn to trust this circle. For others, like Joel, Rudy and Kearn, the journey has been to face and overcome the stories, when confronted with the facts.

How to cope with loneliness?

How to move through grief?

How to trust and encourage trust?

The conclusion Esen and Paul reach is nothing short of perfect. (Mini SPOILER: of course it’s perfect, it involves a library!)

The overall arc of this trilogy is really very satisfying. The stakes have gotten higher with each book, but friendship and high-jinx have maintained the balance between drama and humour. Maybe this last volume was a bit slow to get going compared to the others, but it’s such a delight to spend time with Esen in all her guises that it was hardly a problem. What’s more, this was a much-needed 2020 read – easy to get lost in, lots of fun and focused on all the good stuff people are capable of when they try.

6 thoughts on “Hidden in Sight by Julie E Czerneda”