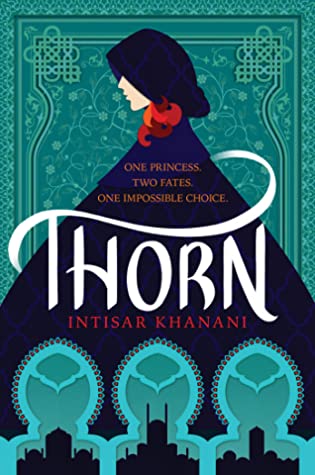 In a different mood, I perhaps wouldn’t have been so absorbed in this retelling of the Brothers Grimm’s story of the Goose Girl. However, I was in need of a thick slice of escapism when I picked this up and I thoroughly enjoyed myself. The main character, Alyrra, is something a bit different from the usual YA heroine and her story has got more depth than I was expecting. Better than that, it wasn’t clear until very near the end that things would work out in her favour and the world in which her story takes place feels promisingly large – so much more could happen there.

Alyrra is the princess of a “tin-cup kingdom”. Unloved by her mother and older brother she is bullied and withdrawn, her only friends the family’s servants. When the king of Menaiya comes a-calling to size her up as a potential bride for his son, she takes this unexpected escape from the abuse she endures at her brother’s hands. Unfortunately, she gets lumbered with a travelling companion who hates her, Valka, and on their way to her new home their identities are swapped by a mysterious Lady. Alyrra-now-Thorn at first thinks to escape even the trappings of her royal upbringing in her new body, but it soon becomes apparent that far more people will be affected by her transformation than she could have imagined, and she has to choose whether to run, or fight for the title of princess.

I had no real expectations of Thorn, having no memory of ever reading the Goose Girl tale and only a vague notion that it was something to do with an identity swap. Once I finished the book I looked up the Grimm version and was surprised that Khanani had stuck much closer to the story than I’d have guessed. And yet she also manages to do something new. One of the main attractions of a fairytale retelling for me, is that the author can play with aspects of the original, approaching it from a different point of view, or subverting its message.

Khanani uses her fairytale inspiration to tell a story of justice and choices, power and responsibility, and the importance of inner strength. That she tucks these themes in and around the doings of secret sorcerers and city thieves, a talking horse and a magical breeze, a found family and the mysterious, menacing Lady, makes it that much more interesting to read.

Admittedly, it doesn’t always hang together seamlessly. The Fae are a part of this world, and the Lady is an opponent with real depth, but there are not enough incidental details to quite convince the reader that the two peoples share more than one terrible historical event. There is magic in this world too, which takes a number of different forms, and while I was happy to go along with it, I’d have preferred a bit more detail there too. I don’t always need Sanderson-level magic systems, but I do like to understand the logic of how magic works in a world and what its limitations are, and there were a couple of instances when an explanation would have been appreciated.

That said, I enjoyed being in this book. Alyrra/Thorn was a heroine I could understand: introspective and inclined to seek out quiet places; appreciative of small comforts; a little wary, a little naïve. It was good to see an introverted character in the main role, and her internal journey from fear to confidence in both herself and others was one of the aspects of this novel I most enjoyed. I liked everything about her friendship with Falada (despite the criticism I’ve seen elsewhere online, if you give me a talking horse, I’m made up), which gave me McKinley vibes, and I’d have enjoyed more about the urchins Tarkit, Torto and Fen – a wish that may well be granted in Khanani’s next book The Theft of Sunlight, which looks set to continue the story of the street kids and the snatchers, (another dodgy element in this book, although I realise now that it was set up for the next).

I also liked how the author handled Alyrra/Thorn’s relationship with Prince Kestrin. The power play between them, the misunderstanding and mistrust, and the eventual friendship, was all really well done. Neither falls instantly in love with the other (thankfully, considering Alyrra is in someone else’s body for nearly the whole book … could have been awkward), nor do they immediately see eye to eye, or ‘click’, or any of that piffle. Khanani treads a careful path with their relationship, and apart from one silly rescue, she gives them an appreciable maturity. Possibly my favourite moments (other than any involving Falada) were those when Alyrra and Kestrin were hedging round each other because they never tripped over a cliché. Others may disagree, but I actually really enjoyed their relationship. Must be getting mushy in my old age.

As I said at the beginning, in other circumstances I might not have enjoyed this quite as much, but it was just what I needed right now. While I have tried to look at it critically for the purposes of this post, I didn’t read it with my critical head on and happily steamed through it in a couple of days (unusual for me). It’ll be interesting to see where Khanani takes the story next and if she’ll weave other fairytales into her following books.