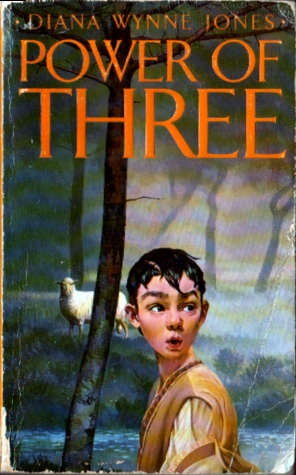 A curse bound with three Powers. Three young siblings. Three Gifts. Three types of magic. Three groups of people unable to see what they have in common. As in all of the books of hers that I’ve read Diana Wynne Jones’ plays with multiple story threads in her standalone novel Power of Three, only pulling them all together to show the pattern at the very end. It’s a trick she pulls off beautifully every time and one of the things that brings me back to her books again and again.

Three peoples live on the Moors: the Lymen, the Dorig and the Giants. And when a Lymen boy, Orban (who’s a little toad from beginning to end – and that’s an insult to toads, but I’m trying not to swear), kills a Dorig boy and steals his torc, a curse is set in motion that touches all three peoples. The majority of the story takes place when Orban and his sister have grown up and had children of their own. It is Orban’s sister Adara’s three children that we follow – Ayna, Gair and Ceri – as they learn about themselves and their neighbours and work to undo the curse.

The book neatly explores the themes of (mis)understanding and (in)tolerance – starting with Gair’s internal doubts and feelings about being ordinary compared to his Gifted siblings and slowly spiralling outwards to encompass the lack of understanding between Gair and his father Gest, then the crumbling relations between the Garholt Lymen and those from Otmound, and finally the divides between the Lymen, the Dorig and the Giants, based as they are on small misunderstandings grown large.

“Have you noticed,” Gair said loudly, “that we’re all people really? … I mean … that we’re all far more like one another than – well, dogs or spiders.”

DWJ makes this point again in the way she tells the story – introducing us to this world via the Lymen so that the Dorig and the Giants are at first completely alien and only become recognisable by degrees. As we become aware of the Giants’ true nature in particular, the world shifts beneath us – it’s a clever way to encourage open-mindedness in the audience without preaching.

And of course, the whole story is told amidst a steadily building chaos, as only a DWJ tale can be. A swarm of protective bees, an invading army of Dorig, some past high-jinx involving a lot of alcohol and a very large stone, Orban’s equally irritating son Ondo, and the imprisonment and intended sacrifice of two of our young heroes – Jones stirs the pot until the reader can’t see a solution before delivering a satisfying conclusion, much like a magician pulling a rainbow string of scarves from out of their ear.

There was, unfortunately, one thing I didn’t like about this book, and that was the raw deal that Brenda gets. Brenda is a young Giant and it is made uncomfortably clear that Brenda is large and therefore not attractive. Her size is mentioned whenever she appears in the story and at the end she is promised that when she grows up she will “be thin too. And very pretty.”  In a book that argues for tolerance of difference, this one aspect jarred. Yes, this book was first published in 1976, it doesn’t make it any less disappointing to have found this in it. Particularly, it bothers me because this is for children, who want to find themselves in stories as much as adults do, no matter their shape, size or hue.

Otherwise, Power of Three is a charming story. Gair is a delightfully introverted main character and I liked the way in which Jones’ handled the miscommunication between him and his extrovert father, Gest. All the benign madness and neat bits of sleight-of-hand that DWJ is known and loved for are here, along with a more serious undercurrent. I might not be recommending this to any of our young readers at work, but it was still, for the most part, an enjoyable, gentle adventure.

(My final gripe is that I can’t find any information about the artist who painted the cover image for the 1989 Beaver Books edition that I have. It’s such a lovely picture – just look at the lad’s expression! – but no credit is given. Bah.)

I read this book for March Magics, which you can find out more about here at We Be Reading and here on Calmgrove’s site, which is where I learnt about it. The chosen theme this year – as you can see above – is All Together Now, and Power of Three was a perfect read for that, suggesting as it did that we all have far more in common than we believe. There is to be a discussion about Power of Three over on Kristen’s site (We Be Reading) from the 25th March, which I’ll be interested to read as I’m sure other bloggers will bring more to this book than I have.

And definitely, absolutely finally, I am counting Power of Three towards my 21 TBR Books in 2021 goal – two down, nineteen to go.