My only half-hearted complaint about The Collapsing Empire was that I didn’t feel the reader was given time to become emotionally attached to anyone as the story zipped along, and yet here I am at the end of the second book caring plenty about what has happened to Cardenia and Kiva, and about what their ultimate fates are likely to be. So it seems, whether I noticed it or not, that Scalzi gave me enough in that first book to form a connection with these two awesome ladies at least. 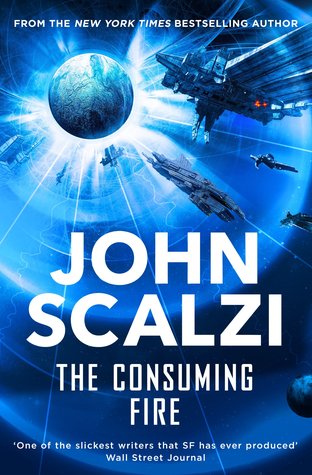 Whether it’s because of this increased feeling for the characters, or just that I’ve acclimated to Scalzi’s breakneck pace, I enjoyed The Consuming Fire loads more than The Collapsing Empire, and I wasn’t exactly suffering through that first book. It definitely helped that Lord Marce and a small, specialised team visited Dalasýsla and discovered awesome Things – without spoiling anything too much, but maybe a little bit, so please read on with care – going to what is believed to be a dead collection of habitats and space-station only to find them not dead (squee); encountering an unexpected ship of unknown origin (double squee); and learning history that sheds new light on current situations (all the squee). That absolutely got my motor going. As did Jiyi and the Memory Room, which I already loved, but kind of lost my sh*t over when Cardenia learnt just how much information Jiyi has been collecting (I would read a whole book based solely on the idea of lost and hidden history and if you have any suggested reading please please drop them in the comments below). And then Chenevert was the icing on the cake, the sugar in my tea (I don’t drink normal tea, but if I did, I’d take sugar), the cherry in my cocktail.

I also love seeing characters kick ass, especially when the odds are stacked against them and the beautifully staged finale to this volume made me very happy. As did Kiva’s night-time visit to the Countess Nohamapetan’s chief of staff, (is our girl developing feelings?), and her continued masterful wielding of the f-bomb, of which I am in awe.

And now for some thinky Thoughts (bear with me, I’m making sense of this as I go): back in November when I read Ian McDonald’s Luna trilogy I was struck by how he made me root for the Corta family – none of whom were particular nice or good people – by the simple expedient of making the other families incrementally more vicious than them. There was no doubt in my mind that the Cortas were not good people, but they were still better than the alternative. In the same way here, in the Interdependency, there aren’t really any good guys, there are just shades of bad. The House of Nohamapetan dreams of imperial power, but I honestly don’t feel they’d be any better or worse than the House of Wu. I think Cardenia herself is a good person, but her House, the court, government and church of the Interdependency and the fictions upon which those things are based weren’t born out of good intentions, and don’t run on good principles. And I can’t help but feel that while Cardenia is doing some frigging awesome things right now, she’ll eventually get destroyed by this not-good system that she’s irrevocably bound to. If everyone is working within ‘bad’ system (one that prioritises personal gain and glorification over the health and wellbeing of the majority is, I think, what I mean here) how can anything good be achieved?

To put it another way, I’m two books into a trilogy and I can’t see how the final book is going to deliver the necessary revolution, resolution and a happy ending for Cardenia. She’s going to have to pull off one heck of a hat-trick and I’m not sure even Scalzi can do that. (Although I think Kiva will be fine).

And so, onwards to The Last Emperox …

4 thoughts on “The Consuming Fire by John Scalzi”