Well, I cried at the end, so there goes my argument that this wasn’t a particularly feely story.

Before I get going, a quick nod to Scalzi for some of the awesome ship names. A few of my especial favourites being the Tell Me Another One, the Yes Sir, That’s My Baby and the No, Sir, I Don’t Mean Maybe, the The Princess is in Another Castle and the That’s Just Your Opinion, Sir. Nearly every time a new ship was introduced I enjoyed a little chuckle over its name. 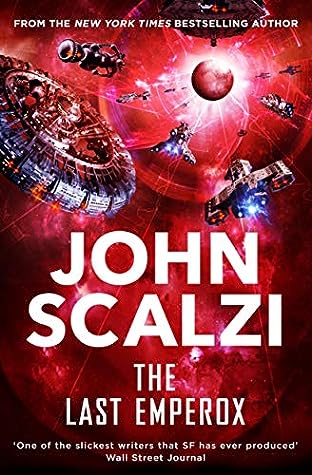 This was a pretty great concluding volume. There were revelations galore, a mutiny, a jailbreak, another murder or two, further consistently punchy dialogue and a whole heap of fun. While this trilogy ultimately offers a pessimistic look at the human race, disinclined as we are to do anything (even in the face if imminent disaster) unless it is “easy or comfortable”, it is counterbalanced beautifully by the humour and pace that Scalzi injects into his story.

And of course, it’s carried by its brilliant characters. Kiva (and her mom) remains my absolute favourite for her attitude and approach to life. I’d pay good money for a spin-off novella series about Kiva and the Countess Huma Lagos (Mr Scalzi, please take note), just going about their days in their own inimitable way. The chapter that deals with Kiva’s short but eventful stay aboard the Our Love Couldn’t Go On could easily be read as a self-contained short story, which is something I remember thinking about the prologue to The Collapsing Empire. Scalzi shows off a gift for quick set-up and pay-off situations in this trilogy that I enjoyed a lot.

Of course, Kiva wouldn’t be half as awesome as she is if she weren’t sticking it to someone we know to be an arsehole, and Nadashe Nohamapetan’s persistence in trying to gain imperial power provides the antagonistic element. That Nadashe is still going strong in this third book was … surprising … to say the least, and I feel I didn’t appreciate her enough in the first two books. Her ambition and greed are of heroic proportions and that she very nearly achieves her goal is almost (but not quite) heart-rending (it’s not, at all – because she’s a grade-A bitch – but you get my point).

And Cardenia. Next to the many larger-than-life paragons of iniquity that people these books, Cardenia, aka Emperox Grayland II, could appear lacklustre, but she doesn’t. I still don’t quite know how Scalzi manages it. She’s not dazzlingly intelligent, although she is clever, she doesn’t embrace any of the ostentation of her position, she doesn’t swear like a trooper or kill people without a thought, and she’s a good person, which is almost a death-knell when she’s up against so many power-hungry nobles. And yet she holds her own. She is a rarity in this universe, someone who appears to see quite clearly (with a little help from Jiyi and others) and wants to save as many people as she can, no matter what it takes. She stands for the optimism that’s lacking elsewhere and her conclusion suggests that optimism, in the right place, and with a dash of AI-fuelled super-power, can move us along despite our own incredible inertia when faced with calamity.

Oh my god, the ending though! I’m not going to spoil it, I promise, I’m just going to say that I both cried and laughed in equal amounts (annoyed the whole time that Scalzi got to me after all) and that one of Kiva’s lines (if you’ve read The Last Emperox you’ll know the one already, if you’re going to read it, you’ll know it when you come to it) was just *chef’s kiss* the perfect chapter ending.

4 thoughts on “The Last Emperox by John Scalzi”