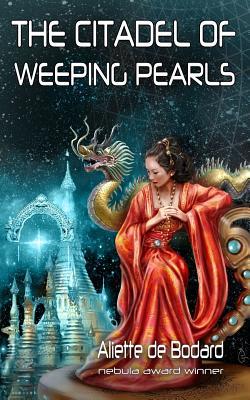 The space station the Citadel of Weeping Pearls disappeared thirty years ago when the Empress Mi Hiep attempted to destroy both it and her rebellious eldest daughter and heir within. Now, facing invasion from the Nam Federation, (who have learnt how to hijack the Empress’ mindships, which have been her primary advantage up to now), Mi Hiep wants more than ever to find Bright Princess Ngoc Minh and the weapons she developed.

In another corner of the story, engineer Diem Huong lost her mother when the Citadel disappeared. Feeling that her mother abandoned her she is working on a time machine, hoping to learn the reasons why her mother did not come with her and her father when they left the Citadel.

And bringing these two strands together is the disappearance of Grand Master of Design Harmony, Bach Cuc, the woman Mi Hiep tasked with finding the Citadel. The Empress calls upon her former lover, General Suu Nuoc, now Supervisor of Military Research and her grand-daughter, the mindship The Turtle’s Golden Claw, to investigate …

This is a complex story worthy of a novel’s length and yet it’s all beautifully handled in less than two hundred pages. With heaps of incredible world-building and some real emotional heft, I found myself completely absorbed by it in a way I did not expect and it’s made me eager to find more Xuya Universe stories to devour. (And it looks like there’s plenty to be going on with).

While it starts out as a mystery, what I loved most about this novella was its exploration of mother-daughter-sister relationships. In the highly structured and layered society of the Dai Viet, whether you are of the imperial family or not, there are duties that must be performed no matter your personal inclination, but still those duties leave emotional traces. When Mi Hiep exiled Bright Princess Ngoc Minh, and later ordered her death, she did so as much out of fear as anger. The very weapons she feared in her daughter’s hands, now present an opportunity, and so the Empress regrets her previous actions both for her daughter’s sake, and for her empire’s.

Similarly, Thousand Heart Princess Ngoc Ha, Ngoc Minh’s younger sister, both resents how her life has been directed by the existence of her mother’s heir and loves and misses the sister she’s lost. Ngoc Ha’s story is further complicated by the existence of her own daughter, the mindship The Turtle’s Golden Claw. She is repulsed by the mindship herself, by her pregnancy with the Mind at her mother’s command, and by her own lack of maternal feeling. And yet her actions, within the story, suggest a desire to make some small amends for her neglect. And The Turtle’s Golden Claw was born within the imperial family for the sole purpose of helping find the missing Bright Princess. Which is just as heart-breaking as all the rest put together.

Perhaps the simplest mother-daughter relationship is that of Diem Huong and her mother and even that is not simple. But to talk more about that is to slide into spoiler territory, so let’s steer clear. Suffice to say I was deeply impressed by the examination of these connections and the damage … or maybe, rather, the unresolved emotions … that each character carried with them.

On top of this, de Bodard’s world-building is fabulous. Reading the brief history of her Xuya Universe on her website (as linked above) is fascinating in itself. This is a universe born from an alternate past in which China discovered America before the West, and Vietnam broke free from Chinese rule and from the French. It is a universe informed primarily by Vietnamese culture (about which I have a great deal to learn) and also by Confucianism. Throw into that the mindships, a unique (to me, at least) take on time travel, deep spaces, and Ancestor implants (interesting that this idea has cropped up in two other recent reads of mine: Arkady Martine’s A Memory of Empire and Scalzi’s Interdependency books, and that Ollie recently did a cool post on this very thing), and you’ve got a world in which I’d happily wallow for years.

I loved this. As it stands this is one of my top reads of the year so far. Eleven out of ten stars.