Buddy-reading A Darker Shade of Magic with Lynn

Not long ago, Lynn and I read Schwab’s A Darker Shade of Magic together and agreed that Wyrd and Wonder would be a great time to post our discussion, and so here it is. For anyone who doesn’t know Lynn (and I am side-eying you vehemently) she is an awesome blogger, one of the very first I started following and responsible for a goodly wedge of my TBR, both stacks and lists. She also takes part in SPFBO every year and has done since the beginning I believe, which is no mean feat and gives you just a hint of what an incredible person she is. 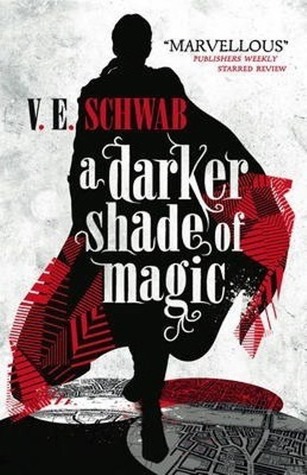 So, you can find the first half of our chat here, and then the second half can be found over on Lynn’s blog here. Please be warned that there will be SPOILERS of the ginormous kind.

Mayri: OK, some first, entirely honest thoughts: I struggled to get going. Alongside reading this I am also reading the next Libba Bray book (which I’ve had to put on pause because it’s interfering) and a pacey scifi and A Darker Shade of Magic has a very different, slower vibe at odds with this other reading. On top of that, everyone wanted a piece of me this last week and I was struggling to find reading time before bed and kept falling asleep, book in hand!

That said, I had two hours all to myself yesterday evening (*happy sigh*) and finally felt like I could sink into the story a bit more. I’m very taken with the world-building so far – the four different Londons are awesome and the different ways that they approach magic. And the tavern that is always there, no matter which London Kell is in – that’s pretty cool (are you getting Gaiman vibes?).

I don’t know about you Lynn, but I’m not sure about Kell yet. He seems interesting enough, but not quite solid for me. Lila made a far more immediate impression (and we share a dream of being pirates!), as did the rather terrifying Dane twins.

I like how dark it got (at first I was worried that we weren’t going to get much substance) what with Lila stabbing Powell, Athos whipping Beloc and his exchange with Holland and then Athos and Astrid drinking Holland’s blood! (Kell’s remark about how they keep their clothes white was a laugh-out-loud moment for me).

And then there are all the questions: who is Kell really and why was some sort of forgetting spell put on him? What’s the deal with the Antari and why are there so few of them now? What actually happened to Black London? And should Kell really trust the nameless woman who wants him to take a letter through to Red London? Is this a set up? Why is this boy so darn naive?! (Hmmm, I think that may be my problem with Kell – he seems very young and a bit too clueless to be trusted to travel between the cities as an envoy for each monarchy, passing notes back and forth – I don’t think he’s in much danger from Grey London, but White London is scary and surely Red London should be more careful with their only Antari? I am questioning this whole thing at the moment … and having a little trouble with my suspension of disbelief, which isn’t very charitable, I know).

Lynn: Similar to yourself, I struggled a little at first to get into this. It felt as though it was going to be maybe too much on the side of YA with few questions and a lot of expectations that readers will simply go with the flow. But, like you I’ve become more involved as the story progressed – in fact I think probably from when Lila made her entrance. I like her already. I don’t dislike Kell but I’d like to know more about him first. Definitely yes to the Gaiman vibes but I guess that’s inevitable in some ways. White London is probably the most interesting of the four at the moment, it’s very dark and the two rulers seem a bit unhinged. Like you though, it does make me wonder the casual way in which the rulers of Red London use Kell, sending him into situations that are dodgy at best and life threatening at worst. You might think they’d be more careful. At the moment, I can’t deny that my first impressions are not as good as I’d hoped, I wouldn’t say that I’m bursting at the seams to pick the book up for example, but my curiosity is piqued now and I’m hoping that some more depth will be added as we progress. Fingers crossed.

Mayri: Oh thank goodness you feel the same! Yes to the YA vibes at first – I was a bit disappointed with that, although things are definitely improving now. Fingers crossed indeed!

Lynn: I enjoyed these chapters in fact it was remarkably quick and easy to get through the allocated pages. That being said i still feel a little detached and I’m not sure if that’s just me and my current reading mood or not.

Lynn: It felt inevitable that Kell and Lila would eventually meet and I liked the way that happened with both storylines coming together quite well. I still like Lila. Her chapters are always more perky somehow. I also find Holland quite a fascinating character and especially the comments from Lila about how he could have simply killed Kell instead of using such a convoluted method – like he was trying to delay the inevitable for as long as possible so that somebody could intervene!

Mayri: I’m fascinated by Holland. I think he’s potentially the most interesting character in the book because while he’s controlled by Athos he’s clearly fighting it all the way and I love that conflict.

Lynn: Holland feels like one of those characters that is stretching the limits of what he can get away with whilst staying within the parameters of whatever it is that is being used to control him.

Mayri: Oooo, but I hadn’t considered that he might be deliberately buying time for Kell, even while obeying the letter of command that binds him.

Lynn: I can’t help wondering if Kell is being ‘steered’ or manipulated. There are a lot of coincidences. He is mysteriously roped into delivering something and unwittingly given the black stone and then set up. He keeps escaping by the skin of his teeth and he’s now about to set off on an inevitable and ‘doomed’ feeling adventure – it’s like he’s being corralled somehow. Like somebody knows that he would want to take the black stone back to Black London rather than let it fall into the wrong hands. Maybe someone wants him to open that sealed doorway?

Mayri: YES! It’s absolutely a set up. And I suspect it’s the Dane twins… but I’ll be much more impressed if it’s not.

Lynn: I’m looking forward to seeing how Lila fits in in Red London. There is definitely something about her that veers towards magic. As though she’s perhaps living in the wrong world. She has a very quick way with her hands/sleight of hand ability. She can also smell magic which seems to be a very unusual ability.

Mayri: I was really taken with the smells of magic! I don’t know why! 🤣

I feel like Red London will be home for Lila, even if she didn’t originate there. She seems to understand the black stone so quickly and yes, there is definitely something about her that leans towards magic. Even the way she keeps coming back to Barron at The Stone’s Throw, arguably.

Lynn: I love the idea of Kell’s magical coat and all the different versions. It reminds me of a strange version of the door in Howl’s Moving Castle, crossed with the Room of Requirement from Harry Potter and a little bit of a tardis with its undefined dimensions.

Mayri: Ha! I didn’t like the way it was described in the opening chapter (the word ‘sides’ really upset me, don’t ask why, I wish I knew!), but when Lila describes it:

… did you know that your coat is more than one coat? I’m pretty sure I went through five or six to find that.

That just sat better with me and gave me a much better sense of this, as you said, tardis-like garment. (Love that you thought of the door in Howl’s Castle too!)

I think all I have to add to your comments is that I liked that Lila asked if she’d meet another version of herself in Red London. I love that she thinks in this way, that these Londons are parallel universes. There’s both practicality and imagination in her question.

Lynn: Oh of course, I meant to mention Barron – and the fact that he clearly knows that the Stone’s Throw is some sort of lynch-pin building and is clearly aware of all the magic – I forgot! But I love that you make the point that Lila keeps getting drawn back there – like the magic is pulling or calling her. I never thought of that but it’s a really good point.

Now head across to Lynn’s Books for the rest of our discussion.